“Alice adventures in Wonderland” is a short story consisting of 53 pages that were written by the creative author “Lewis Carroll”. That story is also published by Oxford University Press, retold by Jennifer Bassett, and also illustrated by Nilesh Mistry. I read this important story because I like the author “Lewis Carroll” and I like all his work whatever his work are such as that story that I like its type so much that story of Alice adventures in wonderland is considered an adventure story.

Main Character of "Alice in Wonderlands":

The main character of that story is “Alice” who is a sensible young girl from a wealthy family that finds her in a wonder strange world that create through imagination and also fantasy that all those lands and creations are by mind imagination. Alice feels comfortable with her identity and then has a strong sense that her environment is comprised of clear, logical, and as well consistent rules and features. Alice’s knowledge with the world has led her to be “disembodied intellect.” Alice displays great curiosity and her attempts to fit her diverse experiences through a clear understanding of the world.

Secondary Characters of "Alice in Wonderlands":

1. The Cheshire Cat: It is grinning cat that appears and then disappears at will. That Cheshire cat displays a detached, clear headed logic and also explains madness to Alice of Wonderland.
2. The White Rabbit: It is the frantic, harried Wonderland creature that leads Alice to those Wonderlands. The White Rabbit is considered some importance, but also it is timid, manic, and aggressive occasionally.
3. The Queen of Hearts: She is the significant ruler of Wonderland. That Queen is severe and also domineering that screaming all the times for her subjects to be beheaded.

Summary of "Alice in Wonderlands":

Alice is Followed by a Rabbit:

"Alice in Wonderlands" story is considered a science fiction adventure story. It took place in wonderlands that started at Folly Bridge near Oxford in United Kingdom. That story is written in 1865. Those wonderlands began in the garden when Alice followed the rabbit to down the hole, to another amazing garden location. Then she swims into her tears sea.

After that Alice goes into the rabbit’s maidservant, Mary Ann’s house. Then she comes upon a mushroom and sitting on it, till she is in the Duchess of the house. Then the Cheshire cat directs her to the March Hare's house to the tea party and then she enters the garden.

Also the Queen of Hearts introduces her to the Gryphon then "Alice in Wonderlands" story is ended in Alice’s garden beside her sister. It considered a fantasia story that making Alice to travel through a lot of mysterious lands to make us release our minds to imagination.

Analysis of "Alice in Wonderlands":

Alice's adventures have amused, and delighted readers. That gorgeous, deluxe boxed set of volumes contains engravings from original woodblocks of Tenniel that were discovered in London bank in 1985, and then reproduced for the first time. This book is a great book so that many people should read it carefully. 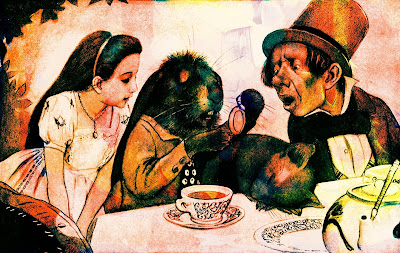