Social capitalism is very common term nowadays. The new ethics and rules have spoken to reveal the worst of human beings. Nowadays, it is easy to find many people with extreme fortunes and on the other hand, beggars. In addition, the existence of charity agencies around the world has sparkled to thrive and gain more attention than ever before. Hence, this means there is gap somewhere.
With the fact of the New World Order, globalization, open markets and other effecting factors have worked hard to squeeze the middle class in many societies, including many of the Western and developed countries. The middle class vanished few decades ago in emerging markets and developing countries due to extreme poverty. Therefore, it is worth knowing that capitalism has changed the world into an ugly place. In addition, cruelty and thriving to gain money only to live became the normal routine for everyone.

A Mutual Benefit between Charity & Capitalism:

Creating a society based on mutual benefits without price negotiation is possible. Some people see this impossible but it can be reached. During the period of deeds and life of Lei Feng, there were an idea being promoted in China that could be usually seen on TVs. It is the picture of Lei Feng’s kind and committed emulators repairing pans and pots for a group of people (Palmer). From this idea, people queued for a purpose. Such propaganda might teach some of people to do great deeds for others. Meanwhile, it is also giving teachings about how could one benefits personally from the work for others. Hence, studying this scene from the perspective of economics, one could find a global obligation to serve other people as a wasteful. This is discussing the voluntarily actions of others while making some publicity and gaining some money. The question is addressing a major idea where capitalism meets charity and creating successful societies where equality and stability are the main ideas.
According to many philanthropists, it is not easy and almost impossible to create harmony between the two norms. Simply, capitalism does not care about the status of people and societies. It is the matter of creating global markets and multinational markets with open arms to collect as much money as possible from people around the world. Hence, corporations and multinational firms are the only winning players (Massing).
Some statistics and financial studies reveal that almost less than 10% of world’s populations own the fortunes of the rest of the world. This means there is not equality in distributing the resources and profits with everyone. Not to mention the wasted land where earth is struggling to maintain order and fights on its own the global warming which was basically created by us; beneficiaries to be more clear and precise. There is no way to create harmony or societies without price negotiations. Those who control the world’s fortunes need to show gratitude for many persons who are being enslaved according to a formula of modern slavery to work day and night without rest to send them money into their bank accounts and in return, workers beg to make a living. It is technically impossible.

Corporations make profits using Charitable causes. Today’s capitalism tends to be more aggressive that one used to know it. It tends also to bring together in one and the same cluster of making money and doing charity. Global capitalism and charity cannot work together because the latter is caused due to the first one. If capitalism is gone, charity would return to normal rates (Sennett).
Charity is more the basic need of economy. It is the same fact as consumption and into consumerism that have been gathered all along. One do not only buy the product, however, he is buying a lifestyle.
Slovaj Zizek, a Marxist philosopher, suggests that when people buy ethical sourced food or toms shoes or Starbucks, people basically are not helping anybody but those who own the companies. However, it merely extends it. The main aim and the right goal is to try to rebuild society ethics based on justice until poverty is eliminated. Cultural capitalism is even a bigger and clever ploy where illustrating the momentarily trials of capitalism to reform itself to cope with the new environment. Many market analysis usually complaint about capitalism as in rewards self-interest. Obviously, people get self-interested under the political systems.

Markets find their channels to get socially accepted in different directions. “Capitalist culture celebrates the entrepreneur, the scientist, the risk-taker, the innovator and the creator” (Palmer). In a more freely and open market, people get to achieve their own goals by figuring out what other want to buy and hence they try to offer them the best value service. Thus, many people who work together to creating a fishing net or a road are those the best modules of making a charitable community.
Getting into complex economy markets, it would definitely mean seeking one’s own revenues by creating services or goods that satisfy the need of customers. Entrepreneurs and workers who best please their customers will be rewarded no matter what. Those who fail, do not get rewarded at all. They will not be even encouraged to get their successful competitors worried about the challenge. In different markets, it is easy people see experiments to fulfilling a better selling opportunities based on mutual cooperation between organizations to achieve more profits.
In this regard, cooperation is seen to be as much a part of the evil capitalism as competition. Both are needed for the simple system of liberal markets. Capitalism tricks some people into paying the hard earned money on latching the buying desires without caring for humanity and the promise that people should all feel happy about buying the unnecessary products. If one tried to walk into any high street shop and he would see the imminent fact. Cereal packets for example as well as clear fresh water, the tree one will save if he travelled to resorts and stayed in hotels are all means of manipulating the humans to keep buying and creating a monster unbeatable of capitalism (Weaver).

Cultural Capitalism and values of charity are interrelated concepts. According to value of the American society that were merely stronger than before, one should ask himself self-reliance and independence – frontier or pioneering values. If one has been one of those immigrants who came from Europe to the US in the mid of 1800’s, he will probably know how American experience lived in very crowded urban districts in extreme poverty (Weaver). It is also the same as many immigrants of today.
Most immigrants worked hard to make money and live the American dream in the west which is full of chances; the land of opportunities. However, things did not work the same immigrants wanted them to be. Almost any politician wants to picture himself wearing a cowboy because it means that they are part of the society and genuinely Americans. But the funny fact is that cowboys never travels in groups. In return, one of the very crucial insults in the American history is to recommend that someone depends on others. When people help each other, it is often made indirectly through different charities which is rarely received because it might offend the receivers.
The average of Americans give almost $500 to charities every year and the very poor who gets the bigger percentage of their income is given to charities. Almost 48% of the population volunteered almost 4 hours every week to different causes and organizations (Weaver). The action of volunteering is very unique where one works for others without worrying if he will get paid by the end of the day. It is a needed step to stop and start helping others who are very poor, elders or kids.

The act of volunteerism is a basic cultural value in the American ethics and behaviors. Usually volunteering work is being carried out for the same of charity agencies and organizations of nonprofit. If one ever got paid for his work, this is totally not volunteerism however it is now considered work. A volunteer can be an aid for elder people or residents, homeless people, or even periodical visits to the hospitals and the patients. One can offer to clean any playground or a local conversation place. Giving advices and guiding people can be also considered as volunteering.
Volunteerism in the Arabic world represents the corner stone of the development of the always-fighting Arab states. Volunteering is foreseen to be a great chance to develop real communication skills between the youth across the Arab states unlike what is happening now from separation and violence between each country. Youth is the fuel of any country and its arm and leg facing the dangers of capitalism and communism as well as driving the concept of wars and violence away from their dictionaries. Below are some barriers that highlight the reasons behind the lack of volunteerism in the Arab world. (UNV)

Finally, capitalism is destabilizing everything around us. People are starting and the need for charity agencies increase. The question is why people need extensive charities if people can stop and reform the evil of capitalism. The weird thing to know also that as a worker, one has to pay twice for charities and the lower salary one get by his employer. Individuals can do charity because it is needed. There are many poor in the world but the sad fact also that workers who used to get money for living are now the ones to beg for money to continue their living however they are already hired. 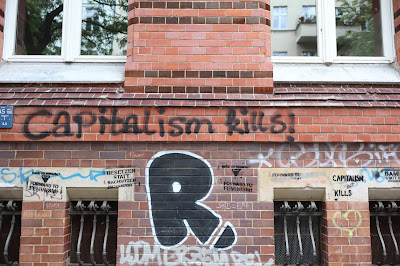