Information about Dubai in English

Information about Dubai in English

Starting from 1959 when Sheikh Rashid Bin Saeed AL-Maktoum borrowed some money from neighbor countries in order to carry out some projects in Dubai, it was the flaming light for making his dream a reality. His dream was how to turn Dubai from a developing village into an awesome developed city. His first moves for development were building new roads, schools and homes. After the death of Sheikh Rashid, his son Mohamed took the responsibility of making his father`s dream a real action and impress the world through converting Dubai to an air-conditioned fantasy world of 1.5 million population.

Information about Dubai in English:

1- The size of Dubai is around 4114 and it is considered one of the biggest cities in Emirates.
2- Dubai was established in 9th of June 1833 AD under the name of the Trucial States (UAE was later established in December 1971).
3- The ruler (emir) of Dubai is Mohammed bin Rashid Al Maktoum since 2006.
4- Burj Khalifa is the best landmark in Dubai with a height of 829.8 meters.
4- Dubai is the capital of the United Arab of Emirates and the wealthiest state of the seven states of UAE.
5- The main income of Dubai comes from tourism with 19 billion Dirhams (5.2 billion USD) income in 2022.
6- The modernism of Dubai is compared to great places like Hong Kong and Singapore.
7- Dubai is also know as the big city of great skyscrapers.
8- Finally, Dubai is a place where all people from all cultures can live together without any racism.

Dubai is Known as the Land of Opportunities:

“Sheikh Mohamed AL-Maktoum built the world`s tallest high-rise building, the 828 meter Burj Khalifa, the world`s biggest shopping mall and the world`s largest motorway intersection”. Dubai has witnessed major changes in all fields that helped it to become a leader city not only in economics but also in all kinds of development and prosperity. There is no doubt that Dubai became a city where all kinds of luxuries, recreations, architects and new inventions exist in it. There are three main reasons that helped Dubai to witness setting great goals with loyal rulers, urban areas expansion & individuals’ respect, and using modern technology.

Why Dubai Is Rich?

The first and also the important reason that paved the way for Dubai to change from being a sleepy village into a great city was that a dream for change. The dream of Sheikh Rashid wasn`t just a normal dream it was an irregular dream also very hard to be achieve but he was insistent and determined; He focused on the change through dedicating his heart and soul to serve Dubai and leave a good impact on its citizens.
As a matter of fact, having a loyal and faithful son played an important role in causing the change in Dubai. Sheikh Mohamed Bin Rashid started his work after being in charge; he wanted to fulfill his father`s dream; making Dubai a great city not only in the Middle East but also a great city that can go in a competition with many developed European cities. Truly, aviation was essential and important to boost industry and change to Dubai through facilitating the transportations of tourists and foreign investors from their countries to Emirate and especially to Dubai; and this was a very influential move from Sheikh Mohamed in his way for the change.

The second reason for change in Dubai is the expansion in the urban areas and being full aware of the importance of tourism. The expansion was obvious through the housing developments to the beachfront, the office towers rose, Sheikh Zayed Road and the silvery sandworm. The contributions of Sheikh Mohamed in all the fields and his triumph to realize stability in Dubai paved the way for businessmen and tourists to come to Dubai.
In 2002 Sheikh Mohamed introduced many assistances and simplified the road for foreigners to own real state in Dubai. Through these procedures multi nationalities moved to Dubai in order not only to live there but also to invest and make new projects inside the city. Hence, most statistics and reports describe Dubai as one of the best global investors` capitals and the fastest-growing city in the world`s largest economy. It was clear that Dubai leaders didn`t ignore the importance of human power and individual participations in making the change and gaining the momentum of progress. In order to construct new buildings and architectures, the city had to depend on new employees so that the city`s population doubled.

The third reason for that great development in Dubai is the good use for oil and gas discoveries inside the city and paying great attention for new discoveries and inventions. The petroleum fortunes in Dubai helped its leaders to maintain stability inside the city and confront any financial crisis that most countries around the world suffered in 2008.
When it comes to new inventions and great projects we have to mention The Dubai International Financial Centre (DIFC) which is opened in 2002, a massive horseshoe shaped office building wrapped around a central twelve-story arch, soon filled up with the giants of global and major banking. Inside the city there are many new inventions and great reliance to internet and technology. Moreover, inside the city there are the Middle East head-quarters of Microsoft, Hewlett-Packard, Dell and Canon.

In a nutshell, Dubai has undergone many stages in its approach for development and change through three main reasons like having great goals, urban expansion and using modern technology. The first seed of change in Dubai was under the Rule of Sheikh Rashid Al-Maktoum as he was having a dream to change Dubai from being a small village into a civilized developed city.
Hence, his son Mohamed followed the same way of his father and did his best to make Dubai a leader city not only in the Middle East but also in the whole world. Many reasons contributed in the change; such as having enormous dreams, the expansion in the urban areas to promote tourism inside the city and last but not least paying great attention for petroleum treasures and new inventions. 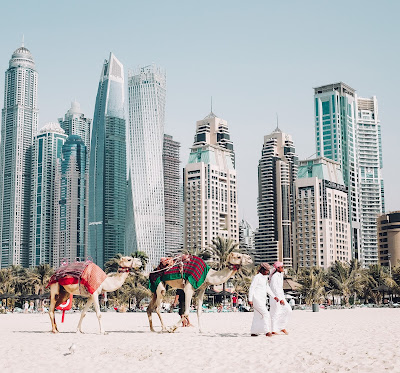