Information about The Gulf War 1991

The Iraqi forces has invaded Kuwait by a command from Saddam Hussein in the second of August in 1990. This was to control the oil of Kuwait and impose supremacy on the area. Then the United Nations refused this matter and in November 1990, it decided that force would be used against Iraq if it did not withdraw from Kuwait. T
he fifteen of January was the deadline for Iraq to withdraw from Kuwait, but Iraq refused to do so. In the Sixteen of January 1991, the U.S. announced Desert Storm Operation against Iraq. The war has lasted for 43 days then Iraq had to obey a cease-fire followed by a withdrawal from Kuwait.

1. The previous military experience of Saddam Hussein through his war with Iran tempted him that he can invade some neighboring countries.
2. The overthinking and overvaluation at Iraq that it is the strongest country in the Gulf region.
3. The debits of Kuwait at Iraq and the inability of Iraq to pay it indebtedness.
4. The greed of Saddam Hussein in the oil wealth of the Gulf region.

Planning of Campaigns Against Iraq:

After the invasion of Kuwait, the Iraqi forces gathered at the borders of Saudi Arabia and started to threaten it. There was a coordination between Saudi Arabia and the United States to stop such movements of Iraq in the region. The President of the U.S. at that time, Bush the father, ordered the division of 82 Airborne to be ready for a war against Iraq. Three hundred aircraft were ready to start the war and they were sent to the Saudi Arabia. Then the United States decided to send one hundred thousand forty soldier to Saudi Arabia to defend it and participate in the cleanup of Kuwait. France, Britain, Syria and Egypt also took the part of Kuwait, Saudi Arabia and the U.S. and they started to send troops.
There were many fears of using the Iraqi forces any chemical weapons. For France, it has shared with it military experience and troops and it has sent chemical experts and fighters. The Desert Storm Operation was performed against Iraq in the sixteen of January 1991. The first stage of the operation was the destruction of the Iraqi border radars to ban it from targeting the equipment of the forces. The second stage was targeting the vital targets of Iraq like the communication centers, the supply centers and the presidential palace. Besides, there were two kinds of military campaigns; the air campaigns then the land campaigns

Operational Prosecution of Campaigns Against Iraq:

The alliance has used weapons like B-52 Bombers, PRVs drones, F117A aircrafts, AH-64 Apache aircrafts, E-8C Radar. Iraq start to defend itself with MM-104 Patriot missiles and M1A1 Abrams missiles. It also started to use the GPS after the destruction of its radar stations. On the twenty-nine of January, Iraq wanted to save its face and invaded the Saudi border town, which is called Khafji, but Saudi Arabia dismissed the Iraqi forces from the town.
In twenty-four of February 1991, the ground forces of the alliance started to cross the Iraqi borders and ground-shell Iraq. The comparison between forces was for the alliance and this forced Iraq to retreat from Kuwait in the twenty four of February to defend the Iraqi land. This technique was very intelligent to shell Iraq in order to force it to retreat from Kuwait. Finally Saddam Hussein has confessed that he has caused his country a war against thirty three countries. This war destroyed most of the Iraqi army with human losses estimated 100000 deaths, 300000 injuries of total 100000 soldier

Consequences of the Gulf War 1991:

1. The economic relations between Iraq, Kuwait and Saudi Arabia were destroyed.
2. On 6 August 2003, the Security Council of the United Nations imposed a worldwide ban on trading with Iraq.
3. This was a real good opportunity for the U.S. to see the effectiveness of its arsenal in a real war not a training.
4. The U.S. and the U.K. imposed a non-fly zone over Iraq.
5. Iraq was forced for chemical weapons inspections by the United Nations.
6. A new war led by the United States against Iraq in 2003 to due to the claims of the U.S. about Iraqi Chemical or Nuclear Weapons. 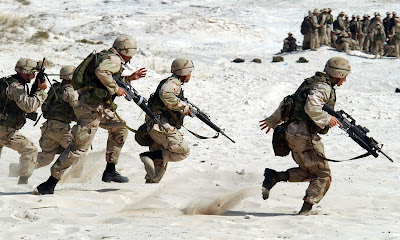