Main Differences between Sweden and Kenya

Secondly, the health care in Kenya and the health care in Sweden are not the same. According to (WAMAI, 2009, P.134) the population of Kenya is about thirty-six and million and nearly three quarters of them live in the countryside. This shows that almost most of the Kenyan people does not have any hospitals or medicines. The people who live in the city get many benefits other than the people who live in the countryside. One from these major benefits is the medical care. Most of the Kenya are rural people that depend on the primitive medications herbs that may harm and not treat. In Kenya, there are many fatal illnesses like hepatitis typhoid, fever, malaria and plague. All these diseases can kill any human in no time. These illnesses are common in Kenya and the country does not have enough human hospitals or good medications to defeat the illness. The number of medical facilities in Kenya is 5129 (WAMAI, 2009, P.136).
A comparison between the number of the Kenyan, which is thirty-six and half, and the number of the clinics and hospitals in the country, which is 5129 can show that millions of people cannot find a place for treatment in hospitals or clinics. In Sweden, health care has a health care system for all people in the country. This medical system includes the nationals of the country and the expats as well. The hospitals in Sweden are very advanced and the doctors are professional. All these elements make the medical system in Sweden easy and make the illness rate in the country low. Medicines are also available in Sweden and they are offered in moderate prices and high quality.

Standard of Living in Kenya & Sweden:

The third aspect of differences between Kenya and Sweden is the rate of poverty. Many of the Kenyan people suffer from unemployment and they are very poor. According to (Beguy, 2015, P. 463) “The capital of Kenya which is Nairobi suffers from overpopulation, poverty and high rates of deaths”. If this the case of the capital city of a country, one can expect the worst in the rest of the country. People in Nairobi suffer from poverty and this poverty comes from the overpopulation, the lack of resources and the rate of unemployment. Nairobi does not have any attractions that can make the investors come to the country and set up new projects.
The bad thing in Kenya and its counterparts of the developing countries is that the people are many and the country does not have a cornerstone to rely one like manufacturing or agriculture. People in Kenya tend to emigrate and work in any other country to provide their basic needs. There are many poor individuals in Kenya and almost half of the population live with one dollar in the day. The rate of richness in the country is also low. The salaries in Kenya are not high and people depend on things like flour and rice for feeding. Many children die in Kenya because of the feminine.
On the other hand, Sweden is one of the wealthiest countries in Europe. The individual income there is very high and the life is very prosperous. The life in Sweden is very easy and the rate of the poor people is very low. Sweden aims at bringing expats to work in different aspects of life. The Swedish can buy from the salary they get anything they want. They also can travel to any country depending of their own money. Sweden is a touristic country and many people from all over the world like to travel to it to spend their vacations.

To conclude, the contrast between a developing country like Kenya and a developed country like Sweden shows how the two countries are different. Studying such differences in education, health care and poverty lead to the fact that people in the developing countries are not satisfied with this bad fate. Being a developed country like Sweden, France, Italy, Germany, Britain and the United States of America have many benefits. These benefits can be for the citizens in education, health care and high rate of individual income. This is very attractive but the bad side of the matter is that these countries have the most destructive weapons in the history as development got to the military weapons and the armies. The developing countries like Kenya, Angola, Cameron, Sudan and Nigeria does not cause many troubles to the world through killing the innocents and invading other countries.
Therefore, development is a good thing if it does not violate the rights of the others. The developed countries should help the developing countries more than this. Some of the developed countries do this but in return of other gains like oil and natural resources. The world of full of many people that need help and need to get something to live on. The two examples of Kenya as a developing country and Sweden as a developed countries tell that there are people that do not find the least right of a human like food, education, treatment and a suitable job. On the other side, there are people who think about the fancy cars, the villas and the resorts in which they would spend their weekends. To be humans, the second people should help the first people to have a better world and ban any catastrophe from happening. 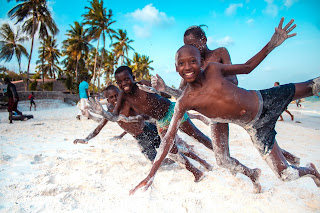