The History of Qatar Timeline

The History of Qatar Timeline

Qatar is an Arab country that lies in the Middle East. As a matter of fact, it comprises the Qatari peninsula on the widest Arabian Peninsula. Saudi Arabia and the Persian Gulf are regarded as its borders and frontiers. The majority of the country’s territories are deserts. As for the political system, it is emirate and the president of the country is the Amir or Sheikh Hamad Bin Khalifa Al-Thani. Besides, the second important man after the president is the prime minister and he is the responsible for the government. What’s more, the economy of Qatar is mixed because it involves a various number of private businesses in addition to other strategies and plans of centralized economy and governmental laws, rules and regulations.
On the other hand, the state was ruled from the mid of eighteen thousands by Al-Thani family. It changed itself from a poor and backward state ruled by British system and which its economy depended on extracting pearls from oceans and seas to a developed, independent and great country which its economy rely on oil supplies and natural gas exports.

The History of Qatar Timeline:

As a matter of fact, the war that was occurred in the period of 1869 and 1868 between Qatar and Bahrain was considered as a dispute with weapons and arms. This war happened in the Persian Gulf and pushed Bahraini and Emirati people versus the Qatari population. It was regarded as the most terrible and horrible violent war of the maritime truce happened in 1835. As a result, the British government intervened in order to end and solve this conflict. Finally, both countries approved a truce and the mediator in it was Britain which resulted in the announcement of Britain for the Al-Thani family to be the ruler family in Qatar. This dispute, unfortunately, has led to a lot of disasters and crises in each state.

On the other side, before 1867, the British government declared and admitted Qatar as a dependent Bahraini state. Later, Lieutenant Colonel Lewis Pelly, the British person who stayed in the state of Bahrain, sent a warning to the Bahraini Hakim in order to condemn and convict him for breaking the maritime rule and to demand and request for reparations of about ten thousand Iranian Tomans. After the escape of Ali Al-Khalifa’s brother, Colonel Pelly appointed him instead of his brother as Hakim of Bahrain in 1868.

3- Al-Thani As Rulers of Qatar:

As a matter of fact, this conflict forced Britain to admit Al-Thani family as an independent and royal family in the state of Qatar. Therefore, the British representative named Pally went to Qatar and met the Sheikhs and Mohammed Al-Thani there in order to sign the treaty of 1868 with them. The consequence of this treaty in fact was the end of the maritime war. An important part in the terms of the treaty a condition that forced Bahrain to give up its dominion on Qatari land and to impose British fines and mulcts as the majority of them was financial.

At the beginning of the First World War after the leaving of Ottomans, the British government and Ottomans themselves announced Abdullah bin Jassim Al-Thani as the ruler and the president of the state of Qatar. As a matter of fact, his family had lived in Qatar for more than two hundred years. On the other side, there were similarities between the treaty of 1916 between Britain and Sheikh Abdullah and the other ones in which Britain entered with other countries in the Persian Gulf. According to this treaty, Sheikh Abdullah approved on not throwing away or getting rid of any of his territories except to the United Kingdom and not getting into any kind of relationships with any other government with the approval of the British government. On the other hand, the British made a promise to protect Qatar from all violations and violent actions by sea and to give the Qatari government the chance to take its good offices in a case of any kind of attack on its territories.

5- Stopping the Trade of Slavery and Piracy:

As what was mentioned in the treaty, Sheikh Abdullah bin Hasim bin Thani promised that he and other Sheikhs from other principalities like Abu Dhabi and Umm-al-Qawain would collaborate with the British government in order to stop the trade of slavery and piracy in seas besides participating in the maintenance of the maritime peace. As for the British Government, it pledged to get all the weapons, privileges and benefits granted to Arab Sheikhs. Besides, Sheikh Abdulla announced the prohibition of selling or importing any kind of weapons into his land and the Qatari port while the British government committed to allow him to buy arms from the Muscat warehouse and other centers approved by it.

After the end of the Second World War, the British Empire vanished and ended in particular after the announcement of India and Pakistan for their independence in 1947. In 1950, Qatar began to chance its source of income and its revenue from pearling to oil supplies and natural gas exports. As a matter of fact, these oil supplies and exports started to become the source of developing the country and achieving its progress and prosperity. During the same year, there was a pressure on the British government in order to retreat and withdraw its forces and intervention from Arab emirates. As a result, the British government gave Kuwait its independence in 1961.

7- Qatar in a Gulf Federation:

After the official British declaration of withdrawing politically but not economically from the Persian Gulf in 1968, Qatar with Bahrain and other countries entered into a federation. Nonetheless, disputes and conflicts between Arab states forced Qatar to announce its independence from this federation that turned out to be the United Arab Emirates. In 1971, the president of Qatar announced the state’s independence officially from Britain and became an independent country.
In 1972, Khalifa bin Hamad Al Thani assumed power after leading a coup against the royal family. In 1974, Qatar turned out to be a rich country after the dominion of Qatar General Petroleum Corporation on all the oil and petroleum processes inside the state. In 1991, Qatar had a great part in the Persian Gulf War especially in the battle of Khafji as the tanks of the country formed as a fire supply for Saudi Arabian guards that were in a fight against Iraqis.

At the beginning of 1980, the economy of the state was subject to a sort of a crisis after the Amir, who was ruling the country since 1972, pulled out all the oil and petroleum supplies from the country. Later, his son Amir Hamad bin Khalifa Al-Thani, who is considered as the current president of the state, overthrew him from the power in a terrible coup against him in 1995 and assumed the presidency of Qatar. Finally in 2001, the state was able to solve all its conflicts on frontiers with Bahrain and Saudi Arabia. In fact, the oil and natural gas supplies opened the door for the country to own one of the largest and highest incomes and revenues in the whole and entire world.

As for me, I think that the most important year is the 1971 because in this year the Emir announced the total independence of Qatar from the British rule. This means that the country has the right to do whatever it wants in its lands and territories besides having the whole dominion and control on its economy and borders. Furthermore, the country will solve its internal issues and political problems without the interference of any other country. Besides, British would not be able to force it anymore to sign or approve any treaties or other agreements as long as the country does not approve them. Therefore, I think that 1971 is the most important year in the history of Qatar.

In my point of view, I think that 1971 is more important than other two years in the Qatari history. This is because in 1971, Qatar declared its full independence from the British government unlike the other two years in which Qatar was still under the British rule and did not have any chance to act except according to the British orders and regulations. Besides, in the other two years, Qatar did not have the ability to use weapons or arms or even give its territories except for the British government but in 1971, Qatar had the full right to act and behave according to its rules, regulations and according to what it thought it was not against its benefits and was in its favor. Therefore, if we put the three years in comparison, I think that 1971 would be the most fundamental and essential base in the history of the state as the emir announced the total freedom and liberty from Great Britain and its intervention in the country’s internal issues.

To sum up, Qatar is considered as one of the greatest countries in the Middle East as it gained its full independence by its strong will and the efforts of its people. Therefore, in order to maintain its development and progress, it has to increase its imports and cooperate with other Arab countries to serve the whole region. 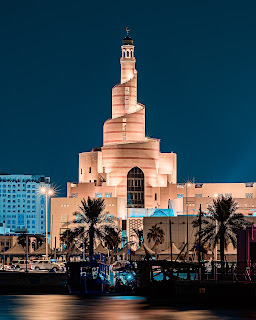