Comparing Marriage in Qatar and India

Marriage in Qatar and India

Marriage is one of the principal needs of any person. Anyone should pass through many stages in his life. These stages stats since he was a child starting to get to school and obtain a primary education. After that one gets older and he gets to the university life. After the university stage, the stage of the military service comes so that one would serve his country. Then one starts to put all his concentration on two main issues that are work and marriage.

Marriage is the gate to the future. Through marriage, one could establish a family and he would have a wife and children. Islam and all other religions encourage marriage and regard it as a noble thing that should be achieved by any adult who is able financially. In this research, the matter of marriage would be discussed upon a comparison between marriage in Qatar and marriage in India (Nanda, 1998).

Marriage Complicacy in Qatar and India:

Qatar is one of the countries that has high rates of unmarried men and women. That is because of the high rates of divorce and the big expenses of marriage. Marriage in Qatar is not a simple thing. There are many reasons for this. The first reason is that Qatar is one of the countries that have high standards of living. This requires the Qatari man who is about to get married to have a villa, a car, a maid and a private driver. All these things are necessities for marriage in the state of Qatar. Without all these things, the man could not get married in Qatar.
In contrary, India is a very poor country. This means that to get married in India, one does not need a maid, a car, a villa or a private driver. The matter is easier in India because the standard of living is very low and almost two-thirds of the population are under the poverty line. To get married in India, it is enough to just have a small home and any job (Gullapalli, n.d.).

The matter of culture and religion is very important in marriage in Qatar and India. Qatar is an Islamic country that follows all the provisions of Islam. Therefore, marriage in Qatar occurs according to Islam. This requires the husband to pay a dowry to his wife, either advanced or deferred, and to buy her gold. All these matters are important in marriage. Moreover, the man is not allowed to touch his woman before marriage or hold her hand. There are many verses in Quran regard this matter as a forbidden one.
On the other side, there are many religions in India. Each religion has a ritual for marriage and this matter creates a kind of diversity in marriage in India (KHALED, 2014).

Norms and Traditions in Both Countries:

In fact, marriage is a subject to the traditions and norms of the country in which it occurs. In Qatar, the tradition is that when one sees a girl and loves her, he applies for her father with his family to ask for her hand. After the acceptance of the bride and her father, the two families start to prepare for the marriage rituals. First, the groom buys the bride gold and presents. After that and with the approach of the marriage date, the bride and the groom go to a typist or a library in order to print the invitations of the marriage. These invitations should be written in names, meaning that each invited person should obtain a wedding invitation with his name in order to be able to come to the marriage. After this stage, the groom starts to prepare for the wedding day. This preparation is through getting for a wedding planning company in order to ask them for halls for weddings. Some people like to make their weddings in the public inside tents. That is because they prefer to make places for men and places for women. It is a principal matter to offer the invited persons foods and drinks. Almost the foods are rice and the drinks are either tea or coffee. The invited men celebrate the man and the invited women celebrate the bride.
On the other hand, there are many different traditions and rituals of marriage in India. There is a type of marriage in which the bride's father searches for a good groom for his daughter and then he offers him to get married to his daughter. This kind of marriage gives the upper hand to the bride's father. The second type of marriage is that through the application of the groom to the girl to get married to her. He offers her family a co or a buffalo as a present. He then swears and obligates to her father that he would preserve her and protect her. The last type of marriage in India is that the bride applies to a groom to get married of him. In this case, the bride takes the role of the groom and the role of her father to choose a good man for her. In the Hindu religion, the families choose the bride and the groom since they were children to get married when they get older. The wedding day in India is very interesting because all people wear colored clothes and there would be some dancing as India is famous for dancing. The bride and the groom wear very colorful clothes and they put a red point on the head of each other. This red point has a big identification because it represents marriage as anyone does not have this point is regarded as a single person (Exarhu, 2017). 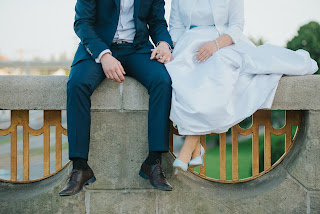