The importance of the world heritage cities cannot be denied due to bearing all the important information about the old cities and the old life. The Gulf region has many of the heritage cities and this gives to many cities in the Gulf region a superiority on other cities. These cities are the gate of the cultures of the people. Therefore, Bahrain, United Arab of Emirates, Qatar and other member states of the Gulf Cooperation Council are participants to the world heritage.
To understand the meaning of heritage cities, the word heritage should be defined. Heritage means all the cultural behaviors, objects like buildings, monuments that are in museums and traditions that people have inherited from their grandparents. Therefore heritage can be materialistic things like buildings, museums, and temples, besides including unmaterialistic things like habits, traditions, language. In this article, there shall be a discussion for three cities Doha city in Qatar, Adliya city in Bahrain and Al-Bastakiya city in United Arab of Emirates as a sample of the Gulf heritage (Umass, 2015).

The history of Doha started from the year of 1825 when the Ottomans have assigned Sheikh Thani Ben Muhamed as the ruler of Qatar. Since this time, the family of Al-Thani has been ruling the state of Qatar. The Ottomans have been defeated by the British forces and withdrawn from Doha in 1916. During the British occupation, Doha and other cities in the Gulf have suffered from numerous problems in the economy. Oil has been discovered in Doha in the year of 1949 and only within eleven years, the city of Doha has become a very wealthy city (World Travel Guide, 2017).
In fact, Doha has a long history of fishing and diving for pearl since the nineteenth century. The city was a center for sea works before the discovery of oil. Doha started to be the capital city of Qatar in the year of 1971 after the independence of Qatar. In this time, a state of the city's reconstruction started to be begun through the establishment of shops and apartments. The university of Qatar was established in Doha in the year of 1973 after the independence by only two years.
In the year of 1975, the National Museum of Qatar has been established as a memory of all the monuments of Qatar as all. Since this time and in the reign of Khalifa bin Hamad Al-Thani, the city of Doha has been regarded as a sample of the cultural and historic expansion. The old airport of Doha, that has been established in the year of 1950, was remarked as a receiver of commercial flights that would enrich the life of the city and of Qatar as all (Lonely Planet, 2016).

Adliya is a region in the capital of Bahrain, which is Manama. This region is full of many cultures because of being an attractive center for people from all cities around the world. Adliya is a commercial region because of having many shopping centers. Moreover, the region has many restaurants that present all kinds of foods like the Indian, Saudi Arabia, Lebanese, Syrian, Turkish, Egyptian, Italian, French and American foods. In the last few years, the region of Adliya has witnessed a big conversion from a place that has old buildings to a place that is very modern and gorgeous.
For all these reasons, Adliya is considered a touristic region that is full of the touristic elements like cafes, fairs, clubs and restaurants. In reality, the history of Adliya is a part of the history of Manama. It is thought that the kingdom of Bahrain has been inhabited by the Sumerians in the year of 2000 B.C. Both the Indus valley's settlers and the Sumeri has used Bahrain a trading center and a link between their goods.
The Empire of Sasan has ruled Bahrain in from the year 400 to 700. After that, the Muslims have taken control of Bahrain until the year of 1521 when Portugal conquered and occupied Bahrain. In the year of 1602, the Persian empire seized the country from the Portuguese forces. In the year of 1783, the king Ahmed Ben Al-Khalifa dismissed the Persians from the country and since this date, the ancestors of Ahmed Ben Al-Khalifa are ruling the country. Manama is the capital and the biggest city of Bahrain for containing more than 80% of the Bahraini population living there. Manama has very new and good-looking buildings and roads that are modern and tree-lined (Every Culture, 2000).

Al-Bastakiya History in the United Arab of Emirates:

Al-Bastakiya, which is in Dubai, is one of the most amazing regions. This region has been established after the modern Dubai's foundation by a decree of the family of Al-Maktoum in 1833. Since this date, this region began to be a center of commerce because of freeing trade and eliminating taxes. Therefore, Persians, that have been allowed to emigrate to the region, have emigrated to Al-Bastakiya and they built many homes there.
The biggest development of Al-Bastakiya has been achieved with the aid of the British Prince Charles who was a supporter of Islamic buildings and architecture in 1989 to survive the historic places. Rashad Bukhash, who is an Emirati architect, has been selected in 2001 to direct a program of conservation for Al-Bastakiya (Qassemi, 2010). The village of Al-Bastakiya is the oldest region that was resided in Dubai for being resided in 1690. The region of Al-Bastakiya includes many historic places like the Traditional Wind Towers (Flashy Dubai, 2014).

At last but not least, the Gulf region has many historic cities that are regarded as a historic place. These cities should be protected by the governments for being reminders of the history of the Gulf area. Doha in Qatar, Adliya in Bahrain and Al-Bastakiya in the United Arab of Emirates are all good examples of cities of heritage in the Gulf region. These three places are the oldest regions each in its country and they have witnessed all the old events of the country. In addition to that, the three regions are very modern in the present time and they have been modernized. Thus, the three regions combine between the past and the present. 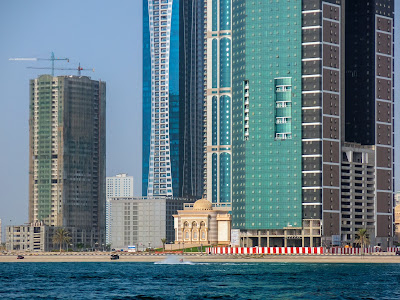