The Uncanny and Unhomely in "Mrs. Dalloway" Novel

The Uncanny and Unhomely of Freud in the Novel of Mrs. Dalloway

The Essay of "The Uncanny" that has been published by Freud in the year of 1919 had a great effect on many of the literary works among which the novel of "Mrs. Dalloway" that has been written by Virginia Woolf in May 1925. This date was after the World War 1 that started in 1914 and ended in 1918. Freud illustrated that the things that are uncanny in literature can change and be canny in the real world according to the context and vice versa. Virginia Woolf is known for making a connection between her literature works and the events of the real life and this is what has happened in the story of "Mrs. Dalloway", which basically speaks about the bad consequences of the World War 1.

The Freudian "Uncanny" and "Unhomely:

Virginia Woolf exploited the idea of Freudian "Uncanny" and "Unhomely" in her novel to come up with a literature text that shows how the World War 1 was frightening and how it was familiar to be at the same time. In fact, the uncanny instants in any literature work are the instants in which there is a link between the literary work and the real life events that the reader of the literary work lives in. Freud has defined "the Uncanny" as removing the difference between human imagined events and events in the real world. He adds that in "the Uncanny", the objects that are inanimate turn to be objects that are exactly like animate. This case includes the likeness and the double connections which are things that are similar to each other.
Moreover, "the Uncanny" includes the spirits of the guardians that believe in their souls and fear of dying. The uncanny concept was represented in the story of "Mrs. Dalloway" through the idea of telepathy which means the individuals' ability to understand each other and know what is in the mind of each other without speaking or signing. This was very apparent in the connection between most of the characters of "Mrs. Dalloway" novel and the connection between Clarissa and Peter can be an example for this. This also was apparent in the incapability of Richard to say to Clarissa that he deeply loves her and the empathy of Clarissa towards Septimus when he suicide.
In reality, the notion that all people deal with each other most of the time through telepathy is an uncanny idea. The events of the real life such as the big event of the World War 1 is one of the reasons that made the characters of "Mrs. Dalloway" speak most of the time about certain events or share many ideas with each other. Mrs. Clarissa Dalloway was feeling constantly that an awful thing is about to happen (Coon).

Mrs. Dalloway as a Sample of the Uncanny:

The room of "Mrs. Dalloway" is regarded as a sample of the uncanny concept that has pre-determined by Freud. Virginia Woolf used the place of a room and not an apartment or even a chamber because it wanted to activate the uncanny context through implicating that the room is very narrow and gloomy place exactly like the psychology of the characters and the outer world in which the United Kingdom suffers from the bad consequences of World War 1.
The concept of a room had two meanings, which are the materialistic room in the real world and the barrier and grief inside anyone. In fact, the room is regarded as a place for monologues and mystical proceedings. Septimus was a symbol of uncanny. He was planning to be a poet and a writer before the outbreak of the World War 1. However, during and after the war, he had suffered from who suffered from hallucination before his suicide through speaking to the dead bodies. He finally suicide, not bearing life in the United Kingdom while seeing the risks and dangers of war.
Moreover, when Clarissa knows of the suicide of Septimus while she was in the party, she reacts in an uncanny way. Death for Clarissa was a state of terror of the future and repose from the life as whole with its miseries. Additionally, in the street, while he was going to the part of "Mrs. Dalloway", Peter Walsh has felt with the uncanny emotions when he saw the dead bodies thrown in the street and arrived to see the body of Septimus in an ambulance to be taken to the hospital.

The Idea of Unhomely & World War I:

To understand the idea of unhomely, one should discuss the point of view of Freud who asserted that the literal uncanny is unhomely. He has said that these two concepts are interrelated and in any case of uncanniness, there should be a case of unhomeliness. The World War 1 has converted the homely places to unhomely places because of the ruin that happened through the war. A new concept started to be used in this time, which is the concept of the unhomely homes. Virginia Woolf demonstrates that there is a close relation between the idea of the unhomely homes and the modernism that is followed by violence, wars, and mass destruction. All the oriented homes turned to be unhomely homes because of the mass destruction through raids, bombings that happened in many countries among which the United Kingdom (Pong).
The idea of being unhomely was mainly introduced through the character of Septimus. Septimus was a poet and a writer before the proceedings of World War 1. However, he has been chosen to be indulged in the war as a veteran. The World War 1 had a great physical and psychological effect on the character of Septimus. Physically, he has been afflicted with a shell shock, he and his wife. Psychologically, he has been changed from a poet, loving the life and describing its beauty to a person who loves death and who decides finally to suicide.
The World War 1 was the biggest reason for unhomely and suffering either during the events of the war or after it. When Septimus has returned to his old home in the United Kingdom after the World War 1, he felt that his home is different from the home he has known before going to the war. This has made Septimus feel that he is unhomely, as he cannot find the same feeling in the home that he left during the war events. This was a result of the spatial displacement, which has happened to Septimus during the World War 1. The events that he witnessed during the war caused him amnesia, a shell shock, speechlessness (Bonikowski).

In the end, Freud has defined the concept of "The Uncanny" as being familiar with something that is very frightening. Such uncanny things can be wars like the World War 1 or illnesses like the diseases that resulted from this gloomy war. This concept was very apparent in the novel of "Mrs. Dalloway" through the idea of mystery, the hallucination, the likeness, the fear of the death and the love of the life. The idea of unhomely homes is very terrifying because it makes one feel that he lives in a country that is not owned by him. This has happened to Septimus who suffered from the scourge and ravages of the World War 1 and when he backed to his home country, which is the United Kingdom, he felt that it is not the home that he has left before traveling to the war. All these events show that the concept of Freudian uncanniness and unhomeliness was used in the novel of "Mrs. Dalloway" by Virginia Woolf. 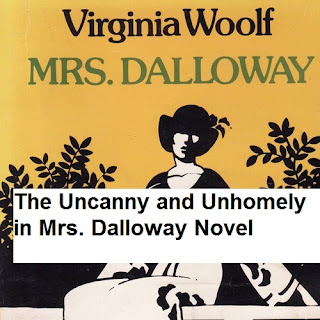