The author of "Dracula" story is called Bram Stoker. He was a business manager in one of the greatest theatres in London, England. In fact, he wrote great novels and books to raise his revenue. Dracula is considered one of his most amazing stories as it was published in 1897 and was famous buy the name of the vampire story. Furthermore, Stoker wrote it in the nineteenth century and all its incidents happen in England and the rest of Europe. No one tells the story of "Dracula" but it is told through journal articles and other letters on the tongue of its main characters. Despite the fact that the story describes the character’s thoughts and idea in the main time, most of its events occur in the past.

He is a nobleman and a vampire. He lives in Transylvania.

He is a notable and smart professor. He is also a philosopher.

He is an attorney who went to Dracula’s house according to an order from his company.

She is a lovely and adorable woman. She is a teacher and Jonathan Harker’s fiancée.

She is an attractive and young lady. She is Mina’s best friend.

He is a talented doctor. His professor was Helsing.

Jonathan Harker is the main character in "Dracula" story. He is an attorney who went according to an order of his company to make business with a noble man called Dracula. Dracula’s house was in Transylvania and although he was attacked by wolves on his way, he insisted to continue his way there. In addition, despite the warning of a farmer not to go there, Harker continued his journey after he was given by this farmer charms against dark and evil force.
After his arrival at the castle, Harker found that Dracula is a gentle man. Later, he began to discover that he is trapped in the castle and he couldn’t get out. Furthermore, he was attacked inside the castle by three vampire ladies in the castle but Dracula told them that Harker is his prey. That’s when Harker found out that Dracula is a vampire and he had to run away from the castle.
On the other hand, Harker’s fiancée, Mina Murray, corresponded with her friend, Lucy Westerna and went to see her. In the town of Whitby, a Russian ship was wrecked and all what was left from this accident were 50 boxes of earth sent from Dracula’s house.
Later, Mina began to think that there was dark form hunting Lucy and saw red marks on her neck. As for Mina and Harker, they met at Buda-pest and got married. As for Lucy, Helsing said that there had to be a garlic flower in her room in order to protect her from vampires. But because of the ignorance of her mother, she removed the flower leaving Lucy vulnerable to vampires’ attacks.
Then, a wolf attacked Lucy’s house resulted in the death of Lucy and death of her mother from a heart attack because of a shock. After Lucy’s death, Helsing ordered the rest to hide in a tomb and Lucy had to be killed in order to let her soul rest in eternal peace. So, they killed her. Later, they decided to kill Dracula.
Therefore, when he attacked them and was preying on Mina, the men sterilized the boxes sent from his castle and forced him to escape. After they reached his castle, they put charms and barriers on it so that Dracula can’t enter. Then at the end of "Dracula" story they murdered him.

As for me, I see that "Dracula" story is entertaining and full of many interesting events and incidents. It is also amusing and I would recommend it to many people who like horror stories and love to read fictional novels. I also believe that the story discusses a lot of issues like modern and ancient life in England. In other words, he talks about how farmers believe in superstitions and unreal stories although they turned out to be real in "Dracula" story and how people who live in town didn’t believe these stories. I also think that the language was easy and any one can understand them. 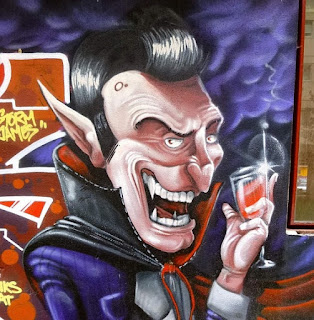