Negative Effects of Television for Children

Television is now in every house. Either one a member of a rich or poor family, he surely has a television at home. Hence, the television became a basic utility for humans for decades. There are other competing gadgets out there that depend on the internet but still the television is on top of the most used devices of all the time. Let us agree that everything have pros and cons. Therefore, the television has those pros and cons. In my paper, one shall be discussing the negative impacts of television on children behaviors as well as advertising campaign. Another thing that should be a matter of discussion is the question either violence on television has a negative impact on children and teenagers or not. Television can change children’s behavior into violence, bad eating habits and failing in study.

Effect #1: Developing a Spirit of Violence at Children:

The question one would like to start with is the television a real threat on our children and leads to teaching them violence? The answer is probably yes. The rate of violence of television has become a norm; a negative norm. Violence on television causes children and teens to become more hostile. Let us start by explaining how it happens. Television, of course, shows programs and other stuff daily. Among these programs, there are movies that contain violence scenes and explicit scenes as well. The focus here is on the violence. The Television broadcaster and channels do warn viewers and rate the content via publishing before the start of any show the required and allowed age to watch their movies. However, in most of our homes, parents usually are busy with making money and facilitating a prosperous life for their kids. The father and mother are most of the time out there working until late times. The kids are left alone at home with the remote control.
The kid has the full control to watch whatever he likes or forced to watch on television. Hence, the kids are not monitored closely. Someone might say that kids can be deprived from the access to televisions during the absence of their parents but there are different ways to watch television. Family and friends would not really care if the viewer is a kid or not. They will not pay much attention as parents do. Hence, we find the kid is vulnerable to watch violent scenes and explicit parts that usually end up with the kid to further impacts of having traumatic behavior of violence against his toys, kids of his age and also adults. It was scientifically proven that television has the negative impact on both adults and children.
However, it is worse with children. Even watching cartoons can make sons vulnerable to violence because there are cartoon networks that stream 24/7 animation movies. Some of them seems to be educational but, in fact, if one watches closely, he would find that his son is being attacked by weird terminologies, violence and radical ideas, which are hidden between the lines of scenarios and the animations itself. It is kind of brainwashing our kids and pushing violent ideas to their characters. If one wants to know the difference, he should try to find two kids of his family or friends where one of them is limitlessly and continuously watching television with no close monitoring from his parents and on the other hand look for another kid where his family monitors and controls his watching behaviors and habits. One can see the difference but also keep in mind the environmental attributes to be almost the same. Make this comparison and one shall find the right answer. Television was not ever meant to be that bad device where every family became curios if they should really turn it on or not. According to results of different studies and reports, violence broadcasted on television can lead to violent and aggressive behavior in children. In addition, when television was first introduced to societies of children, researchers found a rise in the level of verbal and physical aggression among those children. The more child is prone to watch television, the more aggressive the child is.
Another study conducted by Dr. William A. Belson, an evaluation that included around 1500 male children between the age of 13 and 16. According to his study and observation, he could determine that boys with extreme television watching hours are more likely to create violent actions against other boys. In this study, Dr. Belson discovered that the negative effect of each violent action on television was a collective matter. Over time, Dr. Belson found that the boys whose engagement were seen to be aggressive in different actions including painting graffiti, aggressive playing, swearing and threatening other boys, breaking windows and beating other boys. Television violence create a problem for children and teenagers to become less caring. They start losing their inhibitions. They also tend to become less sensitive. They start to lose the sense of worrying about hurting anybody or animal. Television violence has been there for a long time and it does not seem to lessen anytime soon. Violence on television has to stop eventually. Parents should pay more attention to their kids because they are vulnerable. Parents could write a letter to their cable company, start a petition or limit the television access and programs their children view.

Television is always broadcasting commercials. In addition, multiple television ads encourage children to go buy or order unhealthy foods. Thus, creating a big problem of bad nutrition habits. 2/3 of the 20,000 TV ads a normal child sees every year are only food. Most are high sugar foods. After school, TV advertisements also target young children with ads for unhealthy foods which make them hungry and more desirable if they saw it on shelves. It is risky. Hence, families has to play a tighter role on watching and monitoring the material of TV content their kids are influenced by. Most of TV ads are all about foods, beverages and those two types do not promise any health at all. This evidence shows how kids who watch TV are more likely to be chubby and overweight. Critics of nutrition practices have been arguing that television is contributing substantially to children health problems. Television became a universal experience for American kids is a self-evident. For instance, by high school graduation, the average kid will consume almost 15,000 hours in front of the TV. This time is more than the time spent in the classroom. However, the only single activity, which have been used more of the adult’s time, was sleeping.
A kid watching TV that long is prone to watch more than 22,000 food commercials with more than 350,000 attempts to divert his behaviors of purchasing especially food stuff and beverages. Each year, more than 5000 of these commercials will be for eatable products like candiesm pastries, and snacks. More than 50% of TV commercials are made for foods and beverages. This means that most of which are only for high calories and high sugar foods as well as low nutrition products. A 1971 survey showed that four Saturday mornings are dedicated to children only. It also showed that 67% of the ads were about snack, candies, cereals, sweets, soda and chewing gum. Most of all was that the survey also showed that most revealing data were obtained from all food ads during weekdays were basically foods like dairy products, bread and fruits.

There are not any doubts that our parents used to warn us of watching the TV extensively. The television is a huge waste of time. One should try moderate his boys watching habits. Do not stop them to watch TV but also do not let them just watching it all the time. According to different surveys, American kids watch TV more than 22,000 hours. It is a huge waste of time for kids where they should be studying more than that time. It is also worth mentioning that attending classes is not even half of the amount of hours spent watching TV. The TV makes children distracted because they lose the skills of communication with the family and other relatives in the community and neighborhood. They also become more hostile sometimes.
Speaking of studying, it is a bad thing that wastes their times occasionally. The continuous and endless ad. Campaigns tend to take kids mind to brainwash it to buy their products. They knew that brainwashing the kids brain is a collective and effetely profitable method in the adolescence of their lives even when they grow up. TV makes kids only consumers. They barely think and it demolishes the thinking centers of them because they only receive information and wrong ideas through the TV.

Finally, the television, sadly, has more negatives that its positives. Hence, it is better to watch closely kids and tell them that there are better choice and more productive with extra fun than watching the useless television. It is sad to say that the television is a waste of resources, minds and a thief but it is all related to our bad behaviors of using it. Consider returning to radio times, it was even better and gave huge benefits because it used to make one imagines things he hears. Hence it developed the imagination skills and thinking out of the box. Sadly, we are not even close to spread the awareness about negatives of TV on TV because there are business owners who will not let it happen. 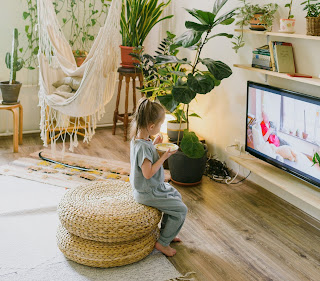