These series are notably known as Sherlock Holmes series. They were written by Sir Arthur Conan Doyle who was a British writer and wrote about 60 mysterious and vague stories that talk about murders, crimes and raise suspicion and doubt inside readers.
Most of the events inside his stories happen in London. Besides, the majority of his stories are fictional because he always wants to attract the attention of anyone who reads them. Sherlock Holmes is considered as the most famous stories for Doyle.
The two main characters in this series are Holmes and Dr. Watson, his best friend. As a matter of fact, Holmes is famous for his intelligence, his smartness, his ability to disguise perfectly and to use science in order to solve hard and mysterious cases. "Silver Blaze" story talks about the disappearance of a race horse which was always known to win all the races in which it enters.

He is the main character in "Silver Blaze" story and he is famous because of his smartness. He always works on hard cases in order to solve them.

He is Holmes’ friend and also the narrator of his best friend’s adventure.

He is the Owner of King’s Pyland Silver Blaze. He is tiny in body, very neat and he looks good. He is always rich.

He is a retired soldier. He used to serve the colonel as soldier for 5 years and as a trainer for 7 years. His best traits are honesty and loyalty.

He is the responsible inspector in Scotland Yard. He is the officer who investigates the murder.

Summary of What Is Silver Blaze?

The events of "Silver Blaze" story talk about the disappearance of a race horse called Silver Blaze and the murder of his trainer who was called John Straker. In fact, "Silver Blaze" story starts with the knowledge of Holmes about a disappeared horse that is always famous to be the champion in all the races he enters. Therefore, he and Dr. Watson had to go to Dartmoor in order to know more about the case, solve it and find the killer.

As soon as they arrive, it seems that their presence is unwanted or not preferable by Inspector Gregory, who is the responsible police officer of Scotland Yard and who is investigating the case. It is obvious that he is doing his job perfectly and he doesn’t want anyone to interfere in his work especially Holmes because he knows that he is smart and he is going to take the credit away from him if he solves it.

Summary of Who Is Gregory?

But later he turns out to be one of the best officer Holmes works with them in other series as he discovers that Gregory is a good officer who loves his job. After many investigations, Scotland Yard police department finds the killer who was a man named Fitzroy Simpson. He is a bookmaker who lives in London. The police find a stick in his hand that they think it is the murder weapon. They also find a part of his clothes in the crime scene.

Actually Holmes is not persuaded that Simpson is the killer. As a result, he starts to follow his thoughts and begins to collect info and explanations in order to discover the real killer and the place of the disappeared horse.

At the end of "Silver Blaze" story, Holmes finds that John Straker, the trainer, is the one who stole the horse and that the horse is the murderer. The horse kills his trainer because he wanted to take him out of the moor in order to gain more money. Therefore, in order to get him out of it, he was going to make a cut in one of the horse’s legs. The horse wanted to defend himself so he killed him.

As for the story analysis, Sherlock Holmes stories are one of the best stories I have ever read in my whole life. They are very entertaining and interesting. They always keep your mind busy and make it ask questions in order to know the real killer and solve the mystery. Furthermore, they are full of doubt and suspicion to make the reader always enthusiastic to finish them. They also show the deep and great friendship between Watson and Holmes and how both of them cooperate together in order to solve the mystery. I would definitely recommend them to my family and friends in order to read them as they will enjoy a lot. 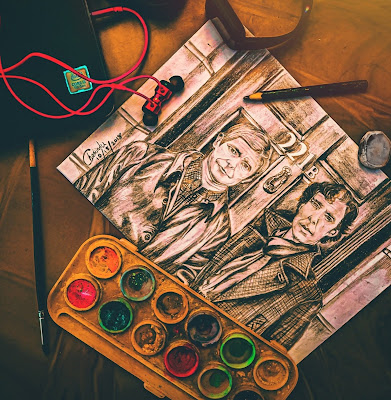