Tracing your family tree to try and understand your origin is a very enjoyable thing. Normally, men and women try to trace their ancestors to understand where they came from and where their roots belong to, that is why genealogy is very complicated. A man`s family tree can be very hard to trace and very difficult to check out in some cases were reports of the family lineage are rare. Some families have past documents with information, pictures and other stuff about their ancestors, while others do not know how to reach any. Arabians and especially gulf residents usually have lineages that go all the way back to a tribal family or an old family line that originated in some place in the Arabic world. Just like all Arabian families, my family and my ancestors come from many places and many lineages, some even have branches in other places that I have never seen or known about before. My family has participated in Al-Zubarah War under the leadership of my old grandfather, Ali Bin Said who was the only man who owned horses. He protected the whole family as he had a big castle and smart leadership.

To speak about my family, I will start by speaking about its origins first. My family originated from AL-Maadid tribe. They have branches in many parts of the Arabian world and only came to Doha, Qatar Recently. My family is mistaken a lot as a part of the AL-Moshada family from Saudi Arabia however, in fact we are not. Although some of my relatives do live in Saudi Arabia we are not connected to al-Moshada family in Saudi Arabia in anyway and our ancestors were never princes in Saudi Arabia. Our origins before coming to Qatar originated in Iraq specifically in Hula in Iraq. Al-Mashhadi name are descendants of my great grandfather and grand ancestor Hussein Al-Mashhadi Al-Huly, who was born in 1260 AH, 2488 AD and died 60 years later in Iraq. Amongst my ancestors is the prince Nasser the son of Prince Hussein Al-Asham and the origin of the Al-Mashhadi title came from Sheikh Ibrahim Ibn el sheikh Ali Ibn Sheikh Abd el-mawla Ibn el-sheikh Radi as a way to specialize him from Sheikh Ibrahim Alamy. Currently Al-Mashhadi house in Iraq Has a lot of branched including; the family of Ahmed, Assad, Al-houl, Al-Dahsh. Sheikh Ibrahim Al-Mashhadi got the name and then after him came Sheikh Ali, Sheikh Mohsen, Sheikh Mohamed and Sheikh Hassan all the way till now. Their descendants still carry the title as the pride of the family till this year.

My ancestors’ line is long and a lot of my ancestors are relatives to princes, kings, etc. Some are even scientists and artists who were well known during their time and that makes me happy and gives me a chance to understand how good my family tree is and how good it is to know about your ancestors and their achievements in their life. Right now my family still gets in contact with some of the branches in the other countries and the relationships between the branches seem to be a very solid one. However, some of the other branches in Iraq for example are no longer in contact with us. Also, since the origin of my family according to old tales goes back all the way to the Farsi region, some of my relatives believe that we might have an unknown branch and unknown relatives in Iran, living till now unaware of the fact that they have relatives and some of their lineages are in fact living in the Arabic world.

One of the famous ancestors in this family is Nezam Eldeen Ali Al-Mashhadi, a very famous Farsi calligrapher who is called the king of calligraphers or “Sultan El-Khatateen”. He was born in Ali Ibn Mousa mosque in 841 AH and died in 926 AD. My ancestor lived during the period of the great prince Abu Saied Al-Taymory and after his death he became the writer of the new Sultan (King) Sultan Hussein urza and died in Mushad in kurgan. Another branch of my family lives in Saudi Arabia, however they are very few. But, from what I knew, they had an ancestor whose name was Majed Talib Ibn Isa and he lived in medina, his sons and daughters still live there till now. A Branch of my family lived in Kuwait and their great ancestor was a very well-known official during the 16th century, his name was Abu Gaffer Ibn Mohamed Ibn ali al-Tousi Al-Mashhadi and just like the Saudi Branch his lineages are still alive in Kuwait till now. Another branch of the family descends from Mohamed Ibn Mohamed Ibn Reda Ibn Ismail Ibn Gamal El-deen el-qemy Al-Mashhadi who lived during the period of Shah Hussein Elsofy and was born on 1074AH and died on 1106 AH.

Amongst my ancestors is a famous scientist named Saied Abd Al-Rehim Albesheet Ibn Saied Al- Mahdi Ibn Mohamed Taqy. He was the student of Sheikh Mortada Elansary in Nagf and he died in 1294 AH. There is also Mohamed bn AL-Amir Masoum Al-Mashhadi Elradwa who is the writer of the book “Media Alory in Fiqh” and he is known as “Short Mohamed” or “Mohamed Al-qaseer” and with him was Mohamed Habeed Allah Al- Radwa A-Mashhadi. They both died in 1255 AH. Also Amongst my ancestors is the relative of Sultan “ King” Nader Mirza AL-anarkashy the King of Kurshan in the year 1214 AH and the teacher and the professor of Mohamed Mahdi Bahr El-olom el-tebtay in philosophy, Mohamed Mahdi ibn Hedaya Allah Elmosouy Al-Mashhadi.

Because my family has a lot of deep routes, we all respect our history and all still keep a lot of the traditions that we got from our ancestors. Respect for the elders is an essential part of the family traditions, when an elder sends an order we all usually obey and when it comes to anything in live including marriage for example, elders opinions is very important and a young boy or girl always goes back to his or her elders to get their opinion about their partners and get advices about life after marriage from them. If an elder feels a marriage is wrong they usually tell the youngsters what they feel and the reasons they feel this way and if not they give their blessing and usually decide with the family of the other side the time and place of the wedding, preparations etc. youngsters tend to not participate in such talks and the elders get to decide everything that is needed for the happy occasion before it`s time for both families to unite and celebrate the unity of two of their children. Because the Arabian Gulf in general all originated from similar origins, traditions in regards to elders and marriage are very similar between the families whether in Qatar, Iraq or even Saudi Arabia. Elders’ opinions are appreciated in all the Arabian countries.

In conclusion, my family has deep origins and my relatives live in a variety of places. Currently my family lives as a modern Qatari family in the world of technology however, before they lives as strong warriors, writers, artists etc. and they didn`t have any of what we have but they did a lot more than what we could ever do and left a long line of historical figures and great situations behind them. I hope in the future someone does the very same thing I am doing now and when I become a big thing my name gets mentioned in an article or a research about my family tree as a person who helped the family flourish and develop. 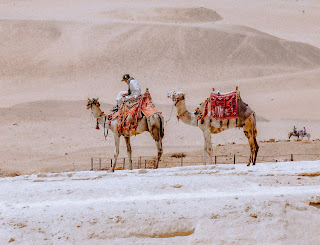