This is a report that is going to be presented to one of the captains after completing my mission in the Al-Zubbara Fire Station in Qatar to enhance the conditions there. I succeeded in the training as an officer at Ras Laffan Emergency Training Center and that what qualified me to receive this mission at the station. On my first day in the station, I was visited by Captain Ali Abdul Zahed who informs me that he completed a station efficiency inspection before me taking over command. Therefore, he now expected me to demonstrate my leadership and management skills to enhance and foster the efficiency of the station.
Thus it was required from me to produce a report on the step that I adopted in my journey of enhancing and improving the station as well as the crew workers of the station. I will organize my report into parts in order to contain every single detail in the station. I will start by pointing out the bad points in the station, its reasons, and how I fixed it. Moreover, I will mention the role of the crew in the station and the weak points that they face as well as the reasons that lead them to disregard for the station and its reputation among others. This also will be a fully report with all the decisions that I am going to take it in order to promote the station’s conditions.
Assessment criteria will be the most important aspect in this report because it determines the significant points that are going to be discussed in the report such as principals of management, leadership, and command, the role of the crew commander in the station, explaining the emergency management principals and the process involved in managing emergencies with the use of an incident management system, evaluating the planning and conducting of training exercises for the crew workers, and finally applying the steps of knowledge of the operational procedures, leadership, management in the supervision of a small team.

The first point that I am going to talk about it is the appliances and equipment of the station which regards as the most significant thing in the station. Appliances and equipment are one of the most important things in the station because it is the foundation of any fire station. Therefore, the caring aspect of those appliances and equipment should be accurate and permanent. This also should take place in order to guarantee the health of the emergency processes. Thus, in my first mission of inspection for the place, I have found the equipment and appliances full of dust, sand, and debris that come from previous accidents, and the equipment has not been cleaned anymore.
For lockers which are responsible for preserving the equipment and appliances after cleaning it, they are so dirty and full of dust and sand too. My role in this situation was so tough and bears them the full responsibility for this mess. I ordered them to plan a daily schedule for cleaning the equipment and the dust inside the lockers and on the other hand, I appoint officers who are responsible for monitoring the people who are responsible for cleaning the equipment. I added that any kind of shortage in the cleaning work there will be hard punishments and sanctions.

The second observation which attracts my attention is the condition of the station grounds and premises in the Qatari Al-Zubbara Fire Station. The station was painted this year as a kind of renovation to preserve the external and internal appearance of the station. However, maintenance of the station after this renovation is so bad and carelessness. As I found doors and chairs are full of painting’s remains and no one volunteer to clean this mess.
Moreover, Doors have become chipped and scuffed by misuse due to the lack of maintenance. I was confused by this situation and wonder why personnel should not have been instructed to clean off these marks from paintwork when they occurred.
Speaking of the external appearance, there were unorganized relaxation areas and the agricultural areas were in a miserable condition. As a kind of fixing what was destroyed, I ordered the responsible officers to make a deal with a cleaning company to be responsible for organizing and managing the external areas which surround the station and this company will come weekly to preserve the appearance of the station.

Training is one of the most important aspects of any fire station. Additionally, permanent training for personnel should be taken into consideration to preserve the fitness of the firemen and their ability to finding new ways for putting off dangerous fires in the Qatari Al-Zubbara Fire Station.
However, in this fire station, I found that personnel is so lazy and fat as they have no idea about many procedures that should be taken during the process of setting off fires due to the lack of permanent training. I ordered the first officer to organize a permanent training for the personnel and provide them with all the new techniques and ideas about the process of setting off fires in order to guarantee the success of the process safely and without any kind of losses.

In this report, I collected all the weak points of the station and offered them to the high authorities to enhance the Qatari Al-Zubbara Fire Station. I do my best in this station by providing orders to the officers and used my leadership and command skills to manage and control the situation. 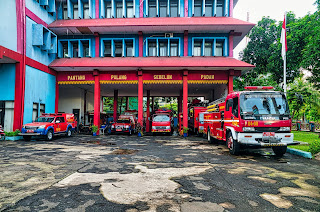