"The Lady or The Tiger" Summary & Analysis

"The Lady or The Tiger" Summary & Analysis

Characters of "The Lady or the Tiger":

Described in "The Lady or The Tiger" story as a semi-barbaric king who is plain and genial. His love for suspense is evident in the story and his barbaric nature controls some of his actions. He invented a very unique way of punishment for criminals in his kingdom. He loved his daughter a lot and did not like the fact that she fell in love with someone he does not approve of. Thus, he sent her lover to the arena he puts criminals in and asked him to choose a door just like any other criminal before him.

A woman who fell in love with a young man who is not in the same position as her. She knew that her father was going to send her lover to the arena and thus she worked hard to know which door in the arena had the tiger and which had the woman. She is described as beautiful and hot-blooded in "The Lady or The Tiger" story. In the end her lover looks at her for advice from the arena and she signals to one door. She was jealous that her lover might be forced to marry someone else so who knows what door she chose, it could have been the tiger`s door.

A young man whose only crime is the fact that he fell in love with the princess. He entered the arena because the king was angry with him but he appeared to trust his lover. When the princess signaled him to open the right door he opened it without hesitations.

Summary  of "The Lady or the Tiger":

The Strange Punishment of the King Summary:

"The Lady or The Tiger" story starts with a description of a punishment of a semi-barbarian king in his country. In this punishment, the criminal enters an arena, and inside it he chooses from two similar doors. Behind one door is always a beautiful maid that he will be forced to marry if he chooses her and behind the other one is a vicious tiger that will kill the criminal if his door was chosen. The king liked the suspense of that punishment and so did the crowds of his country.

One day the king hears that his daughter was in love with someone, he does not accept that person and thus, the king sends him to the arena. The daughter’s hates that her lover might die or be forced to marry someone else different from her. She starts searching for the right door and successfully gets her answers about which door has the tiger and which has the beautiful maid.

The king on the other hand searches all over the country for the most beautiful maid and the most vicious tiger ever all because he wanted to make sure that the young man stays away from his daughter one way or the other. He successfully manages to get someone the young man was interested in to stand behind one door.

When the daughter found out about the identity of the woman behind the door she felt jealous and mad because she knew her man was once interested in the woman. Her feelings left her confused and sad, she did not want to leave her man die but she also did not want him to marry someone else. She spent the night thinking about her problem and came up to a decision.

The next day when her lover looked at her, she pointed to the right door without thinking much and her lover choose that exact door. "The Lady or The Tiger" story ends right there and what type of door the lover chose was not disclosed in the story. Thus, following that the reader get to choose his own end for a story like this one, will the lover die or marry someone else?

"The Lady of the Tiger" Analysis: 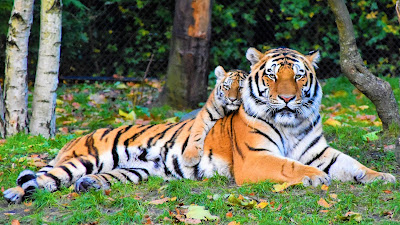