Camel race is a kind of sports that resemble the horseracing in its appearance and in many rules (Passela, 2011). The Camel racing is commonly popular in many countries such as Pakistan, Saudi Arabia, Bahrain, Jordan, United Arab Emirates, Australia, Mongolia, Oman, and Qatar. It appears as a race that is held by number of camels, which are driven by child jockeys to control their directions and to accelerate their speed in order to win the race. This race is made to attract tourist that is resulted in increasing the income of the host country. Camels speed can reach up to 65 km\h in short sprints and they can reserve a speed of 40 km\h for an hour.

Camels is named by the Arabian people by the desert ship as it has the ability to confront the harshness and ruthless of the desert through lake of water and the high temperature of the sun as there is no shadow place in there to have a break (Ministry of Tourism, 2016). It has a stomach that can maintain the water and food inside it for many days and the camel can produce it in any time he feels hungry or thirsty.

A camel appears to be fast runner on the sand of the desert, the thing that attracts many people to establish a race to show the abilities and skills of the camel in a popular way. Therefore, Camel race is organized in many countries that are interested in such a sport and starts to take the form of Olympic sports, as there is a prize for the winner of the race and have rules too. A major camel race is well known by the Camel Cup, which is held at Alice Springs in Australia. It is made annually and includes many other sports including camel races. The name of the biggest prize money is “The Boulia desert Sands”, it is about $25,000.

Horse race is a popular sport in the Arabian countries especially in the United Arab Emirates. It has the same form of the camel race as they both have a certain place to run in which takes an oval shape track that they run through it.
Both animals; camel and horse are ridded by a jockey boy or even a girl the one who is responsible for controlling the direction of the animal and the one that can accelerate the speed of it in order to win the race. Both racings have number of judges that are responsible for determining the winner and the faults that occur during the race.
One of the thing that differ both racings is the land where the animals run on. In the camel race the land of the track should be sandy because camels cannot run on a straight solid land like the one that horse have in his running track.

Importance of the Camel’s Jockey:

As it was mentioned before, jockey is the one that is responsible for controlling the camel through direction and speed. According to the camel race, the jockey is a young boy whose age does not reach 3 years. They choose this age to be light on the back of the camel to guarantee winning in the race. This idea of a young age jockey in the race of camels is rejected in many countries due to the danger injures that the young boys faced during the race time. Therefore, rules are signed by the ministry, which is responsible for sports, to prevent jockey boys who are less than 15 years to join the race. However, nowadays, the countries, which adopt this kind of sport, use new technique in controlling the camel during the race that is by using a robotic jockey that is controlled by people from a remote place. This technique is also used to make the race safe without anything that might confuse it (Ana, 2014). 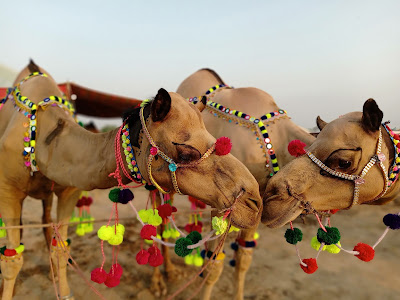