Effects of Traffic Congestion in Qatar

Before traffic jam was not a problem as only rich people had cars, however, right now traffic jam is a very big and problematic issue that every big city suffers from. Qatar suffers from a lot of traffic congestion problems and that causes many negative effects on society. In the current Qatari system, about 1.4 million people are living in Doha alone which is an area that is about 132 square , that of course creates a lot of traffic jam problems. This essay discusses the main disadvantages behind traffic jams and some of the suggestions that could be applied to the concept in order to solve the problem of traffic jam in Qatar.
Traffic jams affects people`s lives, their behavior, their body and the environment. Traffic congestion has several disadvantages including wasted fuel, aggressive behavior, noise pollution, a delay in arrival to important meetings or schools and finally, inability to move. Traffic jam has several disadvantages and negative effects on people`s behavior, on the environment and on people`s life.

There are two types of traffic jams, the first one is the flowing traffic jam which happens when many cars are moving slowly in one street and so they do not exactly stay in their place but still they barely move for long times and that creates a barrier.
The second type is the completely unmovable traffic jam which usually happens when an accident happens on the road or when a car is moving the wrong way and thus it hinders the movement of the other cars, this type of traffic jams usually takes much time to be solved and most of the time leads to various problems for the people.

“Driving in Qatar can be irritating, dangerous and frustrating”. (Baseline, 2010) Traffic jams can lead to someone losing his temper or using bad language as a result of waiting for a while in one spot. Solving traffic jam problems can happen throughout a better regulation of traffic by the ministry of interior or through building private parking lots for the cars to stay away from the road. Regulating traffic jam is a very important thing in any big city around the world otherwise traffic jam can affect people emotionally and make them angry.

“Aggressive behavior could lead to honking for no reason except the fact that you are stuck in a traffic jam and that creates a noise pollution problem that many people could get affected with” (Baseline, 2010). Noise pollution affects the ears and creates health problems for the people inside the car and outside it. If cars had a private garage to park into, roads in the city would be wider and that could help a bit in solving the traffic jam problem and regulating the noise pollution caused by people honking all the time.

Effects of Traffic Jam on the Environment:

“Moderate speed usually leads to a reduced amount of fuel consumption”. (Meyer, 2012) This means that staying in one place for a while in fact creates the opposite effect to what Meyer mentioned thus, it wastes fuel. Wasting fuel leads to a lot of problems for a country and it leads to an increase in the price of petrol. It helps in increasing the damage done to the ozone layer. Finally, it also leads to a lot of other troubles like gas inhalation and air pollution. In order to solve that problem building more roads in a city could help keep the movement going in streets with high traffic and thus reduce the amount of fuel consumption.

“Car engines produce gas and this creates air pollution”. (Meyer, 2012) Air pollution is a big problem that currently faces our society and all the big cities suffer from it. Because car engines overuse fuel in traffic jammed cities the amount of carbon dioxide in cities like that increases a lot and sometimes even causes health problems. Using electrical cars can solve the air pollution problems and creating a small design can in fact allow for better motion in the street.

Effect #1- Delay of Arrivals to Schools and Meetings:

“This year, Doha city in Qatar faced a lot of traffic jam problems on the first day of school”. (Varghese, 2015) Generally, traffic jams can cause a delay in arrival for both parents and children in an average family, children might end up late for school because of traffic jam and parents might end up late for work for the same reason. In order to solve that problem the authorities in Qatar tried applying a smart system that controls the traffic in main cities like Doha. The main idea behind the smart system is to calculate the time intervals between traffic lights and make sure that the waiting period for the cars on the street is small in each traffic light. As a result, cars are not forced to stop except for a few seconds and then they move again. The new traffic system seems to have helped a bit at first but currently it seems like making the interval time needs to be a bit wider in order to help more in solving the traffic congestion problem.

Effect #2- The Inability to Move:

“Once school started this year, the streets in Qatar faced a lot of traffic congestions and long queues formed at several places”. (Varghese, 2015) Traffic jams in general stops the flow of the cars in a street and thus creates a certain level of movement barrier in the street. The reasons behind that inability to move is probably the fact that the amount of cars in the street right now is a lot if compared to the amount of cars that used to be in the streets about a decade ago. In order to solve that problem, the government should try a model of mass transportations for the people and convince the people that more people in one car is better than a person in tons of cars. People could use the metro or buses or any of the transportations that carry more than four people that way more people would be able to get to the place they want without facing traffic congestion in the street.

To sum up, traffic jam in Qatar is very dangerous problem and need to be solved. Traffic jam managed to receive the attention of people in Qatar due to the increasing number of people in the country. Traffic jam has negative impacts on people`s behavior, environment and people`s life. There are many recommendations for Qatari government in order to set strategic plans for solving the problem of traffic jam in Qatar such as building new bridges and roads, hiring experts from other countries to get advantage from their opinions and experiences as well as spread the awareness among people to avoid traffic and reduce the use of cars. 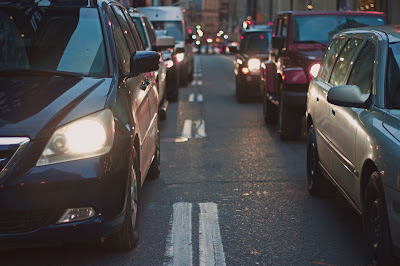