In fact, Qatar is one of the quickest countries in the Arab region that grew quickly and increased its income. That’s why it turned to be the most developed states in economy and tourism industry. In addition, it is known for its hotels, beaches, deserts, mountains, sand dunes, rich history and prominent architecture, old carvings in rocks as well as its new established cities. As for Doha, it is considered as one of the most amazing and fantastic places because it mixes between the beauty of desert and old Bedouin life as well as the recent modern destinations and places. It is a city which determines to be tremendous in order to offer a good competition for other neighboring cities like Dubai and Abu Dhabi.

The Future of Family Tourism in Qatar:-

Family tourism in Qatar is one of the greatest industries in the state as business men, investors and officials of the government search for enhancing this kind of tourism in order to increase the income and encourage the families to spend their vacation in the attractive Qatari places.
Furthermore, Doha, the capital city, is very famous for its touristic places which attract travellers and visitors like new skyscrapers, Anu Nakir al-Siddiq Mosque in addition to Grand Mosque built according to the traditional style. Other attractive destinations involve the nineteenth century Fort of Umm Salal Mohammed, Al Zubra Fort, Entertainment City or the Kingdom of Aladdin as well as old carvings of stones and rocks at Al Jassasiya. On the other hand, there are a lot of beautiful beaches and shores at Umm Bab and Dukhan where families could enjoy practicing a lot of watersports like scuba diving or snorkeling.
Besides, the majority of international airlines in the country involving Gulf Air and Qatar Airways, travel from Qatar to the different regions of the Middle East and Asia too. In fact, if you want to fly directly from New York, London or Athens to Doha, you could be able to do that by booking a ticket from the Qatari Airlines. In addition, tourists could travel from Saudi Arabia using their cars because, unfortunately, bus service is not available.

Examples of Family Tourism in Qatar:-

One of the destinations a family can visit in order to spend a lovely time and make their children enjoy their holiday is The Kingdom of Aladdin or the Entertainment City. This place lies at the West Bay area and includes more than seventeen areas for playing for various age groups starting from young kids reaching to adults and teenagers. It also contains an artificial lake, a cafeteria so that you could enjoy drinking a cup of tea or coffee, theatre and a rest house as well. It opens its gates to visitors from Sunday till Friday but Mondays and Wednesdays are only for women and their children whose age doesn’t exceed twelve years old.
Another place a family could enjoy visiting is Al Rumaila Park as it is existed on Doha Corniche. Furthermore, it contains areas full of grass, restaurants so you could eat a meal, rides for children and shopping stores where mothers could spend their time getting what they need. The distinctive thing about the park is that it opens twenty four-seven.

On the other side, families who come to see Qatar could go to Al Jassasiya where they could see the hills full of rocks that face the northeast coast of the state between the two villages named Al Huwailah and Fuwairit. This place is known for its rock carvings as some of them go back to ancient and pre-historic periods. Besides, families could definitely go to the beach and enjoy playing watersports. In fact, one of the beaches they could visit is Khor Al Udaid Beach as it is away from Doha about seventy eight kilometers. It is situated on the southeast and is distinguished by its amazing sand dunes. Actually, the height of these dunes is about forty meters in certain areas.
Another entertaining place that kids could enjoy visiting is Oryx Farm as tourists go there in order to see the Oryx in its natural environment. This farm is located at Shahaniya. It is also considered as the house of the national animal of the country which is Quatar. One of the reasons behind the fame of this place is because of Quarter animal because no one could see it in such huge groups in other place in the whole world rather than Oryx Farm.
What’s more, visitors could sneak to watch the Arab show as well as races of horses at Al Shaqab Stud Farm. Other attractions in the country involve the Qatar Equestrian Club in which people could view stables and ride horses.

Because Qatar is surrounded by the Arabian Gulf from its three sides, there a lot of water space where families could cruise or practice water sports. Furthermore, sailing is a great activity for spending time and numerous private companies provide tourists with boats and windsurfers as well as sailing classes for beginners. In addition, a cruise on the traditional dhow offers one of the amazing scenes in Doha at night. Besides, people could rent luxurious yachts for the entire day to be used for fishing or cruising. If tourists don’t like any of the previous and numerous activities, they could still use pedal boats, water cycle, and parasail or even wind surf to be able to have a good time.

To conclude, family tourism is one of the prominent industries in the state of Qatar. It is full of attractive places in which families could enjoy their time and vacation without feeling bored or annoyed. They could also go to beaches to spend a lovely day and do a lot of practices like scuba diving, snorkeling or sailing. Therefore, if you want to spend a great holiday with your family, you should go to Doha, the capital city of Qatar. 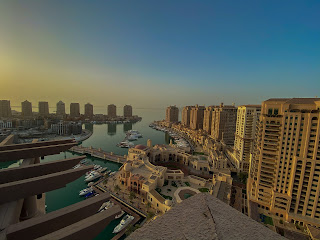