The History of Gymnastics

The History of Gymnastics Sport

In fact, gymnastics is considered as an amazing practice as well as training in order to increase and improve your health as well as enhancing your fitness besides making your muscles and bones stronger. On the other side, gymnastics has shown and demonstrated some of the most incredible scenes in the history of Olympics through many years and decades. As a matter of fact, the history of the sport dates back to old Greece in which talents and skills of gymnastics appeared in the ancient Olympic Games. Other countries and civilizations which practiced gymnastics other than Greece are old Rome, China, India and Persia. All their practice targeted at making young children ready for wars and battles against other tribes and people.

Gymnastics is a great sport and a lot of people practice it through the whole world. It targets to offer a great experience for athletes as well as the chance in order to improve their personal, social and physical skills and talents through taking part in this sport inside a good, secure and suitable atmosphere. Besides, it aids at improving and increasing control on the body. It also searches for boosting realization of the sport in addition to enrich the improvement of social and personal skills while dealing with other persons to be able to have healthy good relationships without facing any troubles.

As for the word of gymnastics, it comes from the old Greek word Gymnos which means nude dress as athletes used to wear at these ages the least amount of clothes on their bodies. Actually, gymnastics contains a mixture which includes physical practice, fitness, and force, balancing your body as well as coordinating and controlling your movements. The type of gymnastics that gained popularity more than the other types is artistic gymnastics as it spread in the whole world. The other two types are rhythmic and aerobic gymnastics.

Gymnastics is a sport with mixes between physical talents like controlling the movements of the body as well as increasing the strength of muscles and bones through tumbling and performing artistic actions to increase the sense of gracefulness inside the spirit. Both men and women have the ability to practice gymnastics at a lot of levels and ranks starting from schools and clubs reaching to colleges and institutions whether they take part in regional or international competitions and contests.

Deep Past of Gymnastics:

As for the history of the sport, it started in Greek in order to make the body move easier by practicing certain exercises which involved running, swimming, jumping over barriers, carrying weights, fighting others and throwing objects like rocks. Before the knowledge of the old Greeks about the old form of gymnastics which was exercising nude, a lot of events based on gymnastics were played and practiced. This sport was really appreciated by Greeks in the old ages and both men and women took part in its exercises and practices.
After their occupation to Greece, the Romans improved the exercises and activities to a kind of sport with rules and regulations in order to be used for making their warriors ready and prepared for wars. Nonetheless, after the collapse of the Roman Empire, practicing gymnastics has increased and tumbling remained as a source of amusement.

In 1774, a Russian teacher named Johann Bernhard involved physical activities beside other subjects in his school in Saxony. After the beginning of this process, making gymnastics more modern started and it also contributed in pushing the German countries to achieve progress in this sport.
At the end of the seventeens, the German Friedrich Ludwig improved the side, horizontal, the parallel bars and sides in addition to developing the balance beam and jumping activities. As a matter of fact, he is regarded as the father of modern gymnastics.

Gymnastics History for the European Countries:

On the other side, gymnastics achieved prosperity in Germany in the eighteens. In Sweden, the sport turned to be more graceful as it focused on rhythmic actions. It was also improved by Guts Muth. In 1811, the inauguration of the school of Jahn in Berlin in order to show his development in the field of the sport continued by the establishment of a lot of European and British clubs.

Gymnastics History in the US:

Furthermore, the American Doctor Dudley Allen Sargent introduced the sport to his country as he taught a lot of young athletes the rules of the sport in a lot of colleges in the United States during the Civil war. Besides, he has made great achievements through manufacturing more than thirty pieces of devices and tools. In eighteen eighty, immigrants from Europe contributed in developing and improving the field of gymnastics in America as they introduced the sport in their cities and states. The sport used to be called as turners and clubs like Turnverein were established. According to the modern gymnastics, activities like carrying weights and fighting were cancelled. The sport also became a confirmed form instead of being personal competition.

There are a lot of types of gymnastics. One of these types is acrobatic gymnastics. In 1999, the FIG introduced acrobatic gymnastics to the whole world. It is considered as a sport in which men and women move and make activities on the floor as it needs a huge strength as well as balancing the body in various situations whether in the air or on the ground. All the activities practiced in acrobatic gymnastics are performed to music and are involved in five classes:
1- Women.
2- Men.
3- Men and women.
4- Women’s group.
5- Men’s group.
Each athlete has to do every movement in a limited time, not more than two and half minutes. As for judges, they search for tough movements as well as gymnastic activities in addition to catches and throws all done in the same time with the music. On the other side, there is aerobic gymnastics which was introduced to the FIG system in nineteen ninety five for all genders. It starts from traditional dancing and that’s why it mixes between aerobics and showings of gymnastic activities on the ground. In addition, athletes and competitors have to do high-leveled and tough movements that range between a minute and fifty seconds. The activities have to involve seven important actions: jog, lifting knees, kicking, jacking, lunging as well as marching and skipping. Besides, it has to involve one of the following classes: strength, jumps, fitness, control and static strength. The movements could also involve twelve steps: men’s individual, women’s individual, men and women, trios and groups which comprise six athletes.
On the other hand, there is the trampoline which became in ninety nine an official class in the gymnastics of the FIG. It turned to an official sport in the Olympics in two thousand. Both men and women have the ability to do trampoline as it consists of four challenging classes: synchronized, individual, tumbling and double mini. In the individual trampoline which is regarded as the only known sport in the Olympic Games, athletes have to do a group of backward, twisting and forward performance and actions without jumping straightly during performing them. The body must be in the center of the mat with the pointing of toes and legs at all the times. At the highest levels of the sport, athletes must not land in a horizontal position without moving for at least three seconds.
During the competition, there are three movements which are practiced. These movements involve first, final and voluntary exercise. Each movement involves ten factors. As long as these factors are tough and hard to be performed, athletes get high scores. The final results are taken after the assessment of both the level of hardness and the application of the movement. As for the synchronized trampoline, it has the same rules of the individual except that it contains two athletes on two different mats doing the same movements. Judges assess the synchronization between the two athletes, the hardness of the movement as well as the execution of each athlete of the involved factors. As for the double mini, double mini movements are practiced on small mats of trampolines. Athletes get close to the small trampoline and doing different actions on the mat. The more these movements are tough to be practiced the more great the execution is and the more better the score.

As for scoring, athletes in the modern sport are judged and assessed individually or in their teams. Each athlete has to achieve a determined number of certain exercises on each existing tool. On the other side, judges give athletes points in every activity starting from zero reaching to ten as ten is considered perfect. Although judges have to be subjective and not biased, instructions are offered for them so that they could give athletes fair points and scores. Normally, four judges are existed in addition to the drop of high and low scores in order to offer a fair assessment. Meanwhile, athletes do their best in order to do the toughest movements in order to push judges to give them high scores and evaluation and to impress them with their great performance.

To sum up, gymnastics is a great sport that is performed in the Olympic Games. It has a great history. It also increases the ability of controlling your body as well as strengthening the bones and muscles. Therefore, we should all practice it to increment the fitness of our bodies. 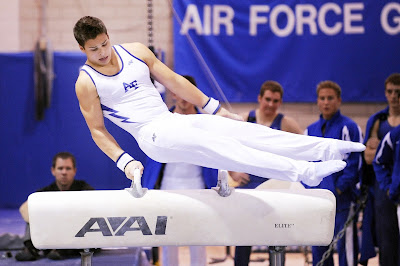