Most experts define law as an important factor and a mean of directing, controlling as well as constraining potential activities. Law also refers to the restricted regulations of a specific country in order to maintain stability, order and safety inside the country. on the other hand, Nuclear Weapons threats the survival of humanity by causing severe and critical state of fear among the whole world. All laws has been established in order to spread security and peace not only inside specific country but also around the world. The risks that come as a result of the spread of nuclear weapons had to be restrained and organized by laws and regulations in order to prevent the prevail of catastrophes and genocides.

Nuclear weapons mean the explosive devices that have got great power from the fission or fusion of a specific atom. The results of the realization of nuclear weapons lead to huge amount of energy, heat and strong radiation that able to destroy a country and tear it apart. As a matter of fact, the International Court of Justice asserted that the outcomes of nuclear weapons are severe and most dangerous than any other kind of weapons. Furthermore, the peculiarity of the radiations that come from the nuclear explosions cause vast damage and immense annihilation. All of these features of nuclear weapons highlight the catastrophic impacts of such explosions.

The nuclear weapons attract the attention of the whole world and these kind of weapons provoke the state of scaring according the harsh impacts of them on the individuals, cities and environment. This was clear through the bad effects of Hiroshima and Nagasaki the two major nuclear calamities in 1945 as they cause long-term severe impacts of both regions. The nuclear explosions cause remarkable heats, brainstorming and radiations inside a wide place of the destruction. Around the years, all sights are directed on limiting and disarmament of nuclear weapons in addition prohibiting the industry of such cruel weapons inside any country through imposing sanctions.
The destructive energy of nuclear weapons could not be obtained or restricted in a particular time or space; these weapons have unlimited dangerous effects. They are able to devastate not only civilizations but also the whole ecosystems of the entire world. Such radiations that come as a result of a nuclear explosions have the potential to affect and destroy agriculture inside the country, demography around very long space, natural resources as well as individual health for a long term impacts. Moreover, these hazardous effects of these kinds of explosions are extended to affect negatively on the coming generations. The act of ionization to the nuclear radiations also contribute in injuring and damaging the future of types of food and environment in addition to it may cause genetic imperfections and diseases among coming generations. Hence, the International Court of Justice is exploiting principal efforts in order to put an end for the use of nuclear weapons. All forces are gathered in order to reduce wars, genocides, human sufferings and crimes.

What Is the International Law and Its Goals?

The International Law or the Law of Nations is an association that has been established by different countries around the world such as the United States and other countries that support the nuclear weapon industry. There are many laws has been stated in order to defend the rights of people to live in peace without any kind of fear for instance the law of war, the law of armed conflict and the law of the use of nuclear weapons. Further there are also several treaties and agreements about the nuclear non-proliferation around the world has been certified not only by international law but also by many other communities such as the chart of the United Nations.
The goals of International Law don`t stop on limiting the proliferation of nuclear weapons nonetheless it has major goals such as reducing war crimes and the lessening of any crimes that committed against the prevail of peace or humanity. It is clear from its name that this association aims to get rid of any unlawful actions or any breaches of the regulations of a specific country. Moreover, the International Law association contains robust requirements that govern the rights of individuals as well as the potential revelation to the criminal actions or prosecutions of some people in the armed services that have the immunity. None can doubt that most countries have been agreed on attesting laws for nuclear, chemical and biological non-proliferation. The Public Assembly also contributed in many agreements for avoiding weapons trading and limiting the use of nuclear weapons.

International Law has significant subjects to be recognized by the United States; such mission dedicated majorly to the uses, rules, proportionalities, necessities, controlling and distinction of the nuclear weapons. Many authorities inside the United States support the International Law in order to supervise the targets of using such severe weapons. The Naval forces, the Air Forces and many other forces in the army of the United States assert this view of controlling the use of nuclear weapons.
There are many articles inside the International Law state the provisions and rules about using nuclear weapons such as, article 23. Over this article specialists have put strict principles to use nuclear weapons for instance, the Hague Regulations that prohibit the prevail of poisons in addition to the use of poisoned weapons, the Geneva Protocol of 1925, which prohibits any use of gases, poisonous, analogous liquids, destructive devices and devastating materials, the Hague Regulations also prohibits any kind of weapons that result in the suffering of human beings, the 1868 Declaration of St. Petersburg that lists otherwise to humanity of such weapons which lead to aggravation sufferings of pathetic poor people which lead to their inevitable ruining.

Legality of Nuclear Weapons under the International Law:

1. The Distinction Rule:
This rule forbids the use of any weapon that has risky impacts without the distinction between non-combatant and combatant individuals and matters. The Armed Forces of the United States has been recognized this rule through introducing the Law of War Desk-book in 2010 as it defined this rule “the grandfather of all International Law principles”. The United States also produced the Operational Law Handbook to tackle the indiscrimination issues as it states, the distinction process demands different conflicted parties to participate only in operations that made by the military forces which affect not only the civilian population but also the combatant forces through directing and applying the powers of solely towards the latter. It is brief that the distinction factors require appropriate criteria to reveal the impressions of the weapons that are used by a particular type of authority.
2. The Proportionality Rule:
This essential rule forbids any use of weapons that have effective collateral results on a noncombatant people or matters might probably become disproportionate over the values of the compensations of the military that would be threatened by any attacks. This rule has been recognized by the United States and its Armed Forced such as Air Forces and the Navy. Hence the Naval Commander`s Handbook asserted that: in order to set a balanced regulation to discover the expected injuries and damages of humans as a result of the use of such prohibited weapons; people have to figure out how much such weapons would contribute in unnecessary devastation inside any country.
3. The Necessity Rule:
It is clear from the topic of this rule as it depend mainly on the imperatively necessary activities of a particular military forces in exploiting any kind of attacks against opponent country. The rule intensifies on the ban the use of any kind of additional powers against weak countries. Despite the fact that talks about the use of force in wars notwithstanding this rule control the use of such forces and does its best to avoid the employment of nuclear weapons or any weapons that may contribute in human suffering. 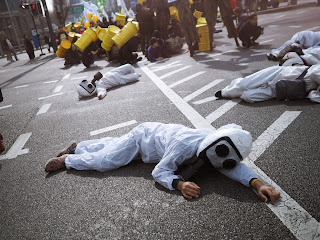