Information about Qatar in English

Information about Qatar in English

The state of Qatar has become one of the most significant countries not only in the Middle East but also in the whole world. The huge change in Qatar, from being a developing country into a leading country was based mainly on oil and petrol revenues especially under the rule of the Amir Sheikh Khalifa bin Hamad Al Thani since 1972 then in 1995 his son “Amir Hamad Bin Khalifa Al Thani”. That turning point in Qatar developed the country completely in all its sides of life to a great status particularly under the rule of Prince Hamad bin Khalifa. In 1995, He introduced a lot of great liberal and improved reforms inside the country and outside it. Thus, I believe Qatar will be a leading country in the Gulf region because of three main reasons which are; paying great attention to the economy of the state, improving the levels of education within the country, in addition to shedding the light on the importance of tourism. Economy, education and tourism are in my opinion the doors that will lead Qatar to become one of the leading countries within the region.

The Strong and Stable Economy of Qatar:

According to Frank Harrigan, an economic advisor to HH Emire of Qatar, “From an economic perspective, Qatar has witnessed a notable economic and social expansion over the last 30 years.” Qatar has more than 27 billion barrels of oil reserves and it is considered the third largest country with the greatest amount of natural gas reserves worldwide. Therefore, Qatar provides huge foreign investments in its natural gas industry and this shapes it to become the world’s largest exporter of liquefied natural gas. This stable state of economy makes Qatar one of the world’s richest countries, with some of the highest individual incomes ever and that results in a decreasing amount of poverty inside it. Qatar also has clear promise for producing solar energy that could improve its economy more and increase its possibilities for development.

Qatar Getting Rid of Any Instability:

Besides, Qatar has generally succeeded to limit any kind of political or economic instability or disorder that other Middle Eastern countries have suffered as a result of the Arab Spring revolutions. Qatar’s economic freedom scores about 71 %, making its economy the 30th freest economy in the 2014 Indicator. Such freedom in economy contains labor, business and monetary freedom. Hence, Qatar’s economic strategy has been dedicated to develop its vast oil and natural gas capitals with extensive success. To sum up, Qatar`s development in economy paves the way for making the country a leading country and increasing the quality of life inside it.

The Smart Educational System in Qatar:

According to the Qatari Minister of Education, “Qatar is focusing principle emphasis on education in accordance with the Qatar National Vision for 2030”. There is no doubt that education is the most important element for any country as no country could get or accomplish its development without paying great attention to education. In fact, Qatar has a full council that is responsible for Qatari educational system; the Ministry of Education or The Supreme Education Council (SEC). The SEC is the experienced authority responsible for the growth and improvement of the educational sector in order to meet the requirements of the State of Qatar for exceptional human resources and skills in various fields. The SEC trails a set of clear ideologies for identifying a clear path for the future, those ideologies include:
1- A clear idea that uses the best practices known worldwide, while keeping in mind and taking into account the Islamic values and beliefs and local traditions.
2- A promise for a developed scientific research and development.
3- A commitment to the fact that all students have the right to enjoy high-quality learning experiences that prepares them for their lives at school or at home.
4- An oath to work with the parents to provide their kids with the best support.

The Many Universities in Qatar:

Furthermore, in Qatar there are a lot of satellite campuses for a various number of amazing universities and institutions that provide a higher level of education than most of the Arabian countries. The Qatari government provides the primary education for free to all children as all of them should be able to enjoy a good amount of free and good education in order to attain the prosperity of their country. The schools teach the Arabic language as it is the official and native language in addition to English Language. Education in Qatar is obligatory for all children as the leaders know very well the importance of education and how it affects positively on the development of any country. Children are the hope for the future and they have an infinite amount of possibilities and talent within them. Briefly, being dedicating in improving the levels of education in Qatar helped it become a leading country with a powerful vision for the future.

Tourism as a Source of Income:

According to Abdulla Malalla Al Bader, the Manager of Tourism at QTA, “Qatar is quickly turning out to be one of the prominent destinations in the tourism world due to the brilliance of strategies and plans designed and used in order to show the importance of activities and attractions”. Concisely, Qatar owns everything that a tourist could probably want; starting from amazing hotels all reaching to icons and symbols of culture as well as, a lot of entertaining activities and amusing practices. hence, the Qatari government has made remarkable investments in order to improve and achieve a progress in the basics of tourism industry during a period of five years such as building hotels, resorts, touristic villages and other facilities so that tourists and travellers could enjoy their residence. In addition, Qatar is regarded as an incredible place that hosts a lot of international sports events and championships like football, handball and tennis. Qatar is also known for having some of the most dangerous sports around the world, sky diving, extreme skating and so on they all grab the attention of people and certain types of tourists enjoy them enough to visit the country just to try them. To conclude, Tourism is a very important sector for progress in Qatar and diverts it to become a leading country in the Arab world.

Finally, there are many reasons that make Qatar a leading country in the Arab world; such as the oil and gas industries which come under economy criteria, the talent within the youth which comes under the education criteria and the authorities’ strategies to increase the amount of tourism, which comes under the tourism criteria. Improving and paying attention to such factors, help Qatar to become a leading country thanks to the hard work and dedicating heart and soul to serve these industries. As a very stable country, Qatar also has a very promising future politically and that will provide it with a very stable ground for more growth and support from developing and leading countries together. The Emir and the authorities are all working towards a prosperous life for the citizen and a flourishing future for the city itself.

Thus, the expectations for Qatar to become the most important and the most developed country in the Middle East are very high especially after reviewing the strategies and visions the Leaders have for their country and the various possibilities that lie within its youth. Briefly, the Qatari government works to improve the Qatari society in a financial way not forgetting creating a vision for the future and improving the quality of life within the country to encourage hard work and production, All for the sake of one goal; turning the country to be number one in the Gulf region and a leading country in the whole world. 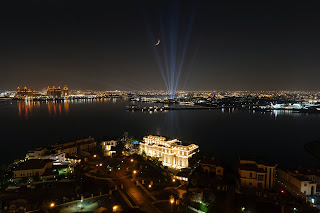