He is an English author that was born in London in 1949. He has studied in the university of Cambridge. He has worked as a teacher in a school and now he works as a teaching fellow in York University. He is the author of two historical novels and he has written 20 books for Oxford Bookworms.

"Titanic" story starts with an introduction about the drowning ship Titanic. In 1985, the ship was discovered in the North Atlantic 3810 meters under the ship. Titanic was built in Ireland in 1909 by 1500 persons. It was the biggest ship in the world. The weight of the ship was more than 46328 tons. It had 16 compartments and 15 emergency doors.
It was a first class ship for the rich people like Mr. and Mrs. John Jacob Astor. There were other rich people like Benjamin Guggenheim. These were the rooms of the first class travelers like business men. The ship contained second class and third class travelers. In 1912, Titanic ship has left England to France and then to Ireland and Finally to New York. The designer of Titanic ship was called Thomas Andrews and he was on it. The ship was like a small city that contained 325 first class passengers, 277-second class passengers, 706 third class passengers and 8 musicians. There were only 20 lifeboats.
Thomas Astor brought only 20 lifeboats as he considered that the ship would never sink. The captain of the ship was called Captain Smith and he said that the ship can sail 23 knots. The Atlantic was full of ice and this made the ship go fast in more than 20 knots. On 14 April at night there were two sailors called Captain Frederick and Captain Reginald. Captain Frederick Fleet saw an iceberg in front of the ship.
The speed of the ship was 40 kilometers per hour and Mr. Fleet told the officer Murdoch about the iceberg but the last did not care. The passengers also did not care and some of them played with the ice on the deck. When the ship hit the iceberg, the crew and the passengers started to care. They all put their lifejackets. The officer Murdoch had to stop the engines. There were a lot of holes in the ship and in the compartments.
After that, Captain Smith told the officer Murdoch and Thomas Andrews. The water started to get into the compartments number 1, 2, 3, 4 and 5. Mr. Andrews predicted that the ship would sink and he was very unhappy. Andrews added that the ship would be safe if there was water only in three compartments not five. Mr. Smith told Murdoch about the matter and he told the Titanic’s radio operator Mr. Jack Phillips who sent emergency messages. The emergency messages was directed to California but none has heard the message. The captain of the ship tried to send many messages with lights and fireworks but none has noticed.
Titanic had 20 lifeboats and this only carry 1178 persons. The number of the people that were on the deck was 2224. The ship was cold and the sea was dark. The women started to get in the lifeboats and men had to stay on the deck. The role of the musicians was to calm down people on the deck with music. They did not go in the lifeboats.
Suddenly the ship started to move down. Some people like Colonel Gracie and Charles started to fell in the sea. They started to swim towards lifeboat B. This caused the death of Captain Smith. At 2.20 Titanic completely sank in the sea. When the morning rose up, many people were dead and their corps started to flow. There were more than twenty icebergs. The designer Thomas Andrews also has died. Finally, the American ship Mackay-Bennett has found hundreds of dead people. Many people have been buried in New York. Millvina Dean who is the youngest passenger in the ship did not die. He lived until 2008. 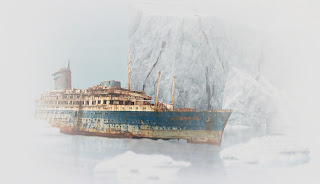