Function and Types of Smoke Detectors

Function and Types of Smoke Detectors

In current modern life, people are so busy doing their works, invent, discover, and build. All these tasks are worked together to develop the modern life and push it to progression and evolution. As a result of that, various and many organizations, institutions, residential towers, governmental buildings, and multinational companies are took place in this new world and have a great function too in the world. Therefore, reserving and protecting these buildings becomes a very significant and obligatory role in life. A smoke detector is a solution that was invented since the late 1890s, when George Andrew invented the first heat and smoke detector in Birmingham 1902 (“A brief history of smoke alarms,” 2014). At that time the world was not modernized like today and has not have the technology which we reached today. Yet, these decades were the reason for what we have reached today.

What is A Smoke Detector?

Smoke detector is a small device that is hanged on a wall and produces a sound when there is a fire or hazard smoke in a place where it is there. Its signals should be control because there are unwanted signals that are produced from various causes may affect the sound of the smoke detector. Smoke detector is the earliest warning of fire in any place and for any time. Through these earliest alarms it can save thousands of humans’ lives. Smoke detector is a limited device that has an area with boarders that its signals cannot pass over it. For example, smoke detector cannot produces sounds when there is a smoke in other building which is a long distance and not included in the area of the smoke detector. Therefore, smoke detector should be located everywhere in a building to control the whole building. Moreover, smoke detector cannot sense the development of a fire on the other side of a closed door; this is because as it was mentioned before it has a limited area for the sensitive components to work through (Sensor, S., 2016).

Smoke detector has a great and valuable function as it is the savior of humans’ lives. For example, every year in the United States there were about 2,000 people who lost their lives due to the absence of smoke detectors in the place where fire is there. During the fire, there is a huge amount of deadly gases and smokes are produced from the fire that lead to many asphyxiation cases which lead to death. This is why most of the reported dead cases are due to inhalation of smoke and toxic gases and not from burns. Most fire victims are died during sleeping time where there is no smoke detector and fire started to increase and pervade. They died in their places without any kind of fight for their lives. On the other hand, when there is a smoke detector, people in a burning place have an opportunity to escape from the place before the fire becomes hazardous and smoke becomes heavier (CPSC, 2016).

It is a detector that characterized by being a photoelectric type device. It produces a light source to detect smoke. The Infra-Red LED which is produced from the detector makes a survey on the surrounded area to detect for any kind of hazardous smoke. Optical Smoke Detectors are not enough sensitive towards false alarm fire, for example, minor smoke from candles, cooking, steam (the smoke detector, N.D.)

Ionization Smoke Detector has the ability to sense smoke molecules that are tiny to be seen be naked eyes. This also happens through alpha radiation. The ionization smoke detector interferes through the air and filled the space; during this process the detector allows electrodes to fill the place with its rays and molecules. Moreover, the ionization level of a room could be lowered while any smoke gets inside the room and absorbs the alpha molecules. After that, it hurts the flow of electrodes and finally setting off the alarm of the detector (the smoke detector, N.D.).

Smoke detectors are our people’s safety tools because it can warn them about the hazard that might threaten their lives. Therefore, people’s house and buildings should contain smoke detectors in each part of the place to avoid death. Maintenance should be continuously to avoid the delay of the detector’s work ability. 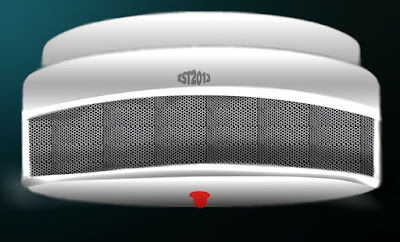