Crocodiles are one of the most amazing creatures that have excited information about their way of life. Crocodiles represent as one of the oldest living creatures which lived for about 200 million years old which means that their existence is from the dinosaur times.

Crocodiles’ focused locations are in tropical regions where the hot temperature plays an important role in stabilized the body temperature of the crocodiles. Therefore, the most famous regions that contains crocodiles are Africa, the Americas, Australia, and Asia. Crocodiles are from the family, which names Crocodilia, which includes other kinds such as, Caimans, Gharials, and Alligators. However, crocodiles have many other species that reaches 13 different kinds, where the smallest one is called dwarf crocodile while the largest one is called the saltwater crocodile. Additionally, the dwarf crocodile grows about 5.6 feet and its weighs is from 13 to 15 pounds, while the saltwater crocodile grows about 20.24 feet and weighs up to 2,000 pounds.

Crocodiles classify according to phylum is Chordata which means that they possess notochord, gill slits, dorsal nerve chord, thyroid gland, and a post anal tail at some point in its lifetime (Portal, 2007, p. 1). Moreover, they classify as Reptilian that lay eggs where they can lay between 10 to 60 eggs at a time, while the hatchlings remain in their eggs for a period between 55 to 110 days. 7 to 10 inches are their long when they are born and they remain immature until they become 4 to 15 years. The period of time that the crocodiles can live is depend on their kind, while some of them can live to around 30 years; other can live more than 30 years; and another kind can live more than 75 years (Bradford, 2014. P. 9 and 10).

Crocodiles are from the carnivores' types which means that they feed only on mean. In the wild, they feed on fish, birds, and frogs, while at the zoo they feed on the small animals that have been killed for them, like rates, rabbits, and fish. The crocodiles have the ability to attack their prey and cut it down into pieces then eat it. After that, they use to swallow small pieces of stone that help them in the digestion operation; however, this takes place on the coast of the rivers or seas of on the surface of water. Further, the crocodiles can open their mouth and swallow for about 5,000 pound of flesh in one bite, while they cannot able to open their mouth when people tie it with a rubber band (Bradford, 2014, p. 1, 2, 18).
Crocodiles are known for their several different types and spices, but with the same appearance that makes many people confuse about distinguishing between crocodiles and Alligators as an example. For that, some specialists in the crocodile's world elaborate the differences between crocodiles and alligators through some appearance in their shapes. The jaw of the alligator takes U-shape, while the jaw of the crocodile take V-shape. Moreover, crocodile has salt glands inside his mouth and particularly on his tongue that helps him to live in salt water. On the other hand, alligator and caiman are unable to carry the salt glands inside their mouth and therefore, they prefer to live under the freshwater areas.
The crocodiles’ species consist of 13 different types including:
1- C. porosus, which is from the kind of the saltwater crocodile
2- C. acutus, which is an American crocodile
3- M. cataphractus, which is an African slender-snouted crocodile
4- C. niloticus, which is a Nile crocodile
5- O. tetraspis, which is an African crocodile and from the dwarf species of crocodiles
6- C. rhombifer, which is a Cuban crocodile.
Each one of these crocodiles’ types has its own characterizations and appearance as well as color. Therefore, the American crocodile is also considered as a vulnerable by the international Union for Conservation of Nature and Natural Resources, however, their populations are increasing. Furthermore, endangered species appear in many kinds of animals while according to the crocodile's species, the Cuban crocodile represents as one of the most endangered species that may lead to its extinction. Despite, its unstable condition that may results in its extinction due to the illegal hunting missions, its population reaches only 4,000 (Bradford, 2014. P. 10, 11, and 12).

According to the reproductive process in the crocodiles’ world, crocodiles’ time of mating starts from July to August, while the accepted age of mating is between 8 to 10 years, however, sometimes it estimates according to the size of their bodies and their capability towards this process. This mating season represents an exciting image about the male of the crocodiles’ way of flirting with females. As this process appears in an aggressive way where fighting occurs between the males to show their powers in from of the females.
On the other hand, the females are going to make sure that there are no other females build their nest in their areas and if that happens, there is a gruesome fight occurs between them and the survival for the fittest. Another thing about female, is that they are very picky in choosing the right male for them where in this stage the male tries to rub his body against her to see if she accepts him to be her mate of not. Further, the process of mating is occurring under the water where they may stay together for several days and mate again during this period of time (BioE, 2013, p. 1, 2, and 3).
Females crocodiles build their nest by dig at least 10 feet into the ground. This is because to make sure that their eggs are in a safe place and they have a good memory to remember the place where they put their eggs in. The number of their eggs depends on many features such as; species of the crocodile, the location, and the size body of the female crocodile. In general, the female crocodiles lay eggs from 10 to 100 eggs, however, the more the female can lay egg the more safe she can have babies because only 20% of the eggs can produce offspring. When the time of hatch is coming the female crocodiles put their remain eggs in their mouth not to eat them but to crack the shell in order to help their babies to get out of the shell. This is one of the most attractive feature in the crocodiles that is rarely to be seen in other kinds of animals.
The crocodile's reproductive process specializes by one of the most amazing aspect, which represents in disappearance of the chromosomes in the genes of the crocodiles, which is responsible for determining the sex of the baby while male, or female. Instead of that, the temperature is the feature that plays the role of the chromosomes and determines the sex of the offspring of the crocodiles (BioE, 2013, p. 4, 5, 7, and 9).

1- Other facts about crocodiles are that they can loss their teeth during swallow the pieces of rocks in the time of the digestive process, but they can rapidly gain another teeth instead of the lost ones. These crocodiles can go through 8,000 teeth over a lifetime.
2- Another fact is that crocodiles so not sweat as they are known for their cool blood and to balance their body temperature they used to open their mouth in a process that is called mouth gaping to enter the air inside their bodies.
3- Moreover, a well-known popular quote that says crying crocodile tears means a person who has the ability to manipulate others by fake tears. This popular quote is back to a scientific information about crocodiles, that their lachrymal glands hide a fluid behind their third eyelid, which is called nictitating membrane. This fluid helps the eyes of the crocodiles to reduce the bacteria; moreover, it wets their eyes in order to facilitate its movement.
4- However, these tears do not appear except when the crocodiles come out from the water and expose to air, during this time their eyes start to be dry and the fluid plays its role in making the eyes wet that result in facilitating the eyes’ movement (Bradford, 2014. P. 15 and 16).

Finally, crocodiles are considered remarkable living creatures. Crocodiles are popular to be living from 200 million years ago and managed to preserve their existence from distinction unlike dinosaurs. Crocodiles mainly live in hot places such as Africa and Australia to be able to stabilize their body temperature. The last but not the least fact about crocodiles is that they are very fast swimmers, the thing that helps them in catching their prey. Therefore, they can swim with acceleration up to 20 mph and they can hold their breath under water for one hour. Yet, on the land, they have a slow motion due to their small legs that hold their heavy bodies, therefore, their acceleration up to 11 mph for a short distance (Bradford, 2014. P. 19). 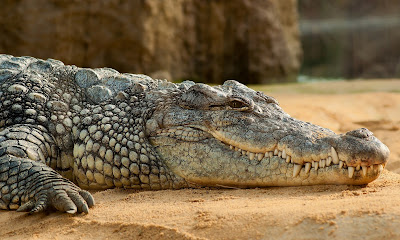