The real aim of establishing Katara village  is to strengthen human interaction through art and cultural exchange; promoting acknowledgment and cultural awareness in Qatar; and to showing up the abilities of their artistic energies through the management of its different organizations, societies and facilities. In addition to that, increasing the economic income is a main purpose for Qatar. Qatar exploits all its natural aspects to support the idea of building this city as it feels the importance of its construction. Its main target of shaping this village is to support the tourism in Qatar by attracting tourists from all over the world to witness its beautifulness through the oriental buildings and cultural places such as; heritage centers, opera house, libraries, theatres, art galleries, academic facilities, mention cafes, museum facilities, green areas and information center.

Katara village is named the cultural village which is constructed in Doha in 2010 on the occasion of the Doha Cultural Capital of the Arab World year. Additionally, it is located on the Eastern coast between West Bay and the Pearl. This village is founded to reflect the Qatari culture through traditional architecture that includes several activities. This project is also cost about $82 million dollar. It contains many different cultural places and views such as heritage centers, opera house, libraries, theatres, art galleries, academic facilities, mention cafes, museum facilities, green areas and information center.

Qatar’s main aim of building this cultural village is to strengthen human interaction through art and cultural exchange; promoting acknowledgment and cultural awareness in Qatar; and to showing up the abilities of their artistic energies through the management of its different organizations, societies and facilities.

Culture is the significant aspect that characterizes the Katara village as its name becomes the Valley of cultures. In the city of Katara the buildings take a mixed shapes between retro-romantic and oriental architectural styles, this to attract the majority of people and tourists to the village. Through this magnificent buildings, art exhibition spaces are appeared such as; QMA gallery, the Qatar Photographic Society and the Katara Art Center.
Moreover, the village of Katara hosts the Opera House which is characterized by a mix of Oriental and late Victorian architectural styles. Despite its significance, operas are rarely performed, yet it is also shelter for the Qatar Philharmonic Orchestra. Furthermore, the Katara city is located on the beach which creates an amphitheater, seating up to 5000 people and uses for events’ concerts. On the seaside, several cafés and restaurants are established for the Qatari families and tourists. Finally, the headquarter of the Al Jazeera broadcasting station is founded there and contains the same building designs and styles to reserve the cultural image of the city.

Qatar has witnessed a great economic income through these decades due to the new construction projects that help in enhancing the image of the country of Qatar. Katara as a cultural village which attracts a lot of Qatari citizens as well as tourists from all over the world is one of the significant sources that enters huge income to the Qatari economy. In general, tourism in Qatar adds about US$7.6 billion to Qatar’s economy. Therefore, Qatar set numbers of projects that will cost for about $8.48 billion to encourages the tourism to Qatar and to attracts more people to its touristic places. This projects are Doha Festival City, Doha Convention Centre, Mall of Qatar, Doha Zoo, Lusail Museum, Katara Towers (Lusail Marina), and not forgetting the FIFA World Cup football stadiums, home to the FIFA World Cup in 2022.
Katara Hospitality is another major economic income to Qatar. It is one of the leading companies in the Arabian world that establishes and constructs many fashioned ideas for building projects. It concerns about the importance of providing well-structured support to its businesses to enable cost effective development. Katara Hospitality has many exceptional and remarkable developments presently being designed and constructed in Qatar and abroad.
As it is an important village in Qatar which big concern is made for it to enhance and develop its facilities and services, many projects are held for that purposes. For instance, Doha Bay which is known as Sharq Crossing is a causeway between 600 m and 1,300 m that will link Hamad International Airport with the district of Katara. Moreover, Qatar is going to open a project named Katara Plaza which will take area for about 38,000 km2. This project will contain a number of retail outlets which will help in attracting the Qatari citizens as they are well-known for their high consumption aspect. These projects will help in increasing the economic income in Qatar as it wants to be the hub of tourism around the world.
Furthermore, Fath Al Kheir is a journey that is made by Katara managements in order to promote Qatar’s maritime heritage. It is another vital source for the economic income as it promotes the tourism in Qatar through its water sources. This also elaborates that Qatar exploits each part and source in its land for one main target which is increasing its income profits.

Katara city or valley of cultures is a significant city in Qatar that contains various cultural places and views which reflect the culture of Qatar. Big concern are made by Qatar towards this city in order to flourish tourism in Qatar as it wants to be the hub of tourism around the world. Katara Village is well-known by the name of the valley of cultures which indicates that it is a cultural city that contains cultural buildings, places, and views. Katara is one of the major cities in Qatar that attracts Qatari citizens and tourists due to its beautiful and new places that identifies the culture of Qatar. The Village of Katara is mainly in Doha. It is established in 2010 on the occasion of the Doha cultural Capital of the Arab World year. It is located on the Eastern coast between West Bay and the Pearl. It also costs Qatar US$82 million. 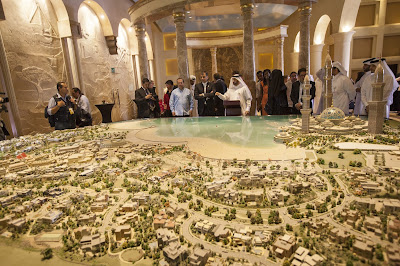