Advantages and Benefits of Highways

Advantages and Benefits of Highways

Highway is one of the most important road that works as beneficial connection among cities in order to decrease the pressure on main roads. In recent years, the number of cars and individuals increases day by day and this leads to traffic congestion, the thing that forces governments around the world to establish highways as means to solve many problems. For example, according to the statistics made in 2012, the number of cars in Qatar is 876.039 cars, which creates a lot crowd load in the public roads of Qatar (Isolate). Actually, highways are more preferable than the public roads, because of the frequent car stops, which creates crowds in high roads. Thus, transportation becomes stress-free in highways, especially for huge vehicles. Moreover, highways play a big role on providing work opportunities for several types of engineers and workers. Here are the main advantages of highways:

Highways are easier than the public roads because the accelerated speed is high and the road lane is wide and paved in a perfect way. (Beljatynskij, et al, 2009, paragraph 1). The possibility of accidents and traffic problems is higher in public roads than in highways. Moreover, highways reduces the traffic jam and the state of cars being close to each other in a small size road with a high-polluted atmosphere that comes from the cars exhaust as well as frequent cars stops that would lead to many accidents. Highways are the perfect mean of transportation that most countries tend to establish and take care of due to their abilities to decrease transportation problems.

Highways provide an easier and faster accessibility to different areas in the country (Jha, & Kim, 2006, paragraph 8). As highways are free from congestions, saving time and efforts are the two main aspects that highways provide for drivers. Highways also link different towns and countries along the road; the thing that encourages many people to prefer travelling through highways rather than any other kinds of ways. While constructing highways, transportation management is considered the main concern in order to ensure people`s safety while driving their cars through highways (Dau-Ngo, et al, 2013, pp. 368-387). In addition, highways provide a wide and comfort area for the trucks and big transportation means to be driven in an easy and fast ways to reach their destinations without any accidental hazards with small cars.

The construction of highways provides good opportunities for engineers and workers to find jobs in such huge projects. Civil engineers are the luckiest category in engineering field that occupy a great part in these projects while workers come in the second stage of importance after engineers. As a result, the number of workers will increase due to the great number of opportunities and many people will attract to the projects of constructing highways due to the high benefits that come from these projects (Ragone, 2014). This is because the whole projects of constructing highways depend on those two major specializations.
Highways attract people to the area, which provides more work for engineers especially civil engineers. Therefore, highways provide many and various opportunities for manpower and engineers to work on these projects. In addition to there are different and many specializations that these kinds of projects need. The construction of highways need plans and professional strategies and techniques, the things that need road planners, officials, managers, and professional engineers to create highways without any default that may lead to accidental hazards (worldbank.org, 2001, paragraph 1). Engineers in different majors work on establishing highway roads and services while workers implement the orders and instructions of the engineers.

Highways save fuel for people who drive through these ways. This is because highways have less traffic and trails, which prevent the repeated stop of cars, trucks and means of transportations, which will lead to more safety for individuals (Cox & Love, 1996, paragraph2). Highways have many advantages that their results appear on time. People around the world prefer highways as they save time and efforts. Their easy curves, opposite roadways, wide area in each road lane, straight flat land of the road, and its facilities and services on its both sides, permit quicker time agendas and faster deliveries to reach their destinations in a safe way and on time, in addition to the reduction of accidental hazards.

Advantage #5: Highways Would Save Time

Individuals always prefer highways, because it saves time. highways are characterized by their wide paved roads that are free of traffic lights and frequently stops of cars and transportation means. As a result, large number of people start using highways instead of the general roads, which are full of traffic, jams that waste time and fuel. Moreover, highways assist in reducing the automobile exhaust in the populated areas, which general roads pass through. Highways are always constructed in free zones of population to allow expanding the road lanes (Andersen, 2008, page 1). Therefore, trucks need a wide place with a high-accelerated speed in order to deliver their cargo on its specific time. For that, highways come as a solution for the trucks to provide them wide paved road lanes with long distance roads that can connect many cities together.

Finally, highways are means of transportation management that adopted many countries around the world to maintain stability and to reduce the traffic in the main roads. Highway is a wide and long road that allows cars and means of transportations to drive into a high acceleration in a safe way. This road has the ability to reach many towns and countries as well, the thing that allows trucks and cars to reach their destination easier and faster. Highways provide new job opportunities for engineers and workers in different majors. Moreover, in highways there are no traffic jams to make cars stop and wasting time, the only need for stop is for fuel the car that has a specific place for the car that does not bother the road itself. 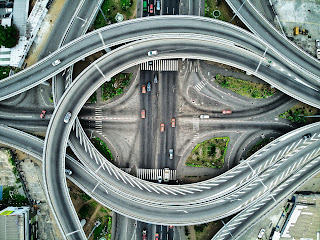