What Is Cyber Crime Definition?

What Is Cyber Crime Definition?

With the growth of the development of technology and the importance of computers because of its usage in many fields like entertainment, business and commerce, cybercrimes became also very essential and increased rapidly. On the other side, the majority of the first fraudulent people who committed cybercrimes were Americans because the beginning of usage of computers started in the first place in The United States. In addition, the progress in technology made very hard for any country or even a small town not to suffer or face any type of cybercrimes. Therefore, probably there is a question that many people ask. This question is what is the difference between cybercrimes and regular crimes? The answer is that in order to do cybercrimes, you have to use computers and technological devices but this difference is not enough to distinguish cybercrimes from other crimes.

Cyber crime that is known also as computer crime refers to the usage of computers and technological devices such as I-phones, laptops and even tablets to perform and do illegal targets or operations such as fraud, trading in inventions and pornography, breaking privacy and stealing info and data.

What Is Cyber Crime?

Cyber crimes or computer crimes mean the usage of computers in order to commit a crime including any illegal activity starting from emotional or financial position of person reaching the national security of a certain country. Computers could be used to do the crime or could be the target of the crime. According to experts, cybercrimes can contain these two factors and the best definition for it is a type of criminality that is committed against people and organizations in order to harm the people’s reputation or causing damage directly or indirectly to info and personal data using modern networks and new innovative technologies such as the internet and mobile phones.
Furthermore, we could define cybercrimes as illegal operations that included the usage of computers as its main instrument to achieve the target and commit the crime. In fact, the American Department of Justice expands the meaning of the term in order to refer to any illegal activity that uses technology to hide evidence and important proof for other crimes. In addition, the term can be used to mean criminalities against information and personal data and could also comprise activities like stalking people especially famous ones, illegal access, violation of data, traffic in child pornography and fraud. As for the effects, cybercrimes involve a large number of attacks on persons and corporations too.

In fact, criminals don’t need to use technology in order to steal data or info, break others’ privacy or trade in pornography. These activities were there before the appearance of the cybercrimes’ term. That’s why cybercrimes, including using the internet, shows a spread of the existence of criminal attitude besides new illegal processes. On the other hand, innovative technologies offer new criminal chances but small kinds of crime. The majority of cybercrimes are considered as attacks on personal data or corporations’ and governments’ information.
Despite the fact that cybercrimes don’t harm the body of persons, they harm the virtual body or structure of a certain organization which is regarded as a group of info that contains data about persons and institutions on the websites. This means that in the virtual and digital world, each one of us has virtual identity which is very important in our daily activities. We are considered as a set of numbers in various databases possessed by governments and organizations. Indeed, cybercrimes show the importance of computers in our life and also the weakness of other facts like personal identity.

Two fundamental types can used in order to define the process of making cybercrimes. The first type is cybercrimes in which the targets are computers, networks or other virtual programs like viruses and malware. The second type is cybercrimes in which computers and technological devices used to make the process of crime easy like stalking and spam.
Meanwhile, the Norton Cyber-Crime Report showed in 2011 the number of victims in cybercrimes which was more than four hundred million victims and this to focus on its great and dangerous effects. In addition, the rate of computer crimes is increasing quickly as in the Norton reported, the financial costs of international cybercrimes were more than three hundred billion American Dollars. Therefore, it seems that cybercrimes cost a lot of money and have horrible consequences including stealing people’s info and stalking them.

As a matter of fact, cybercrimes have very bad and awful results. Criminals use technology in bad ways in order to commit crimes. The internet, for example, is a great instrument used by criminals to scam and spam since it gives them the opportunity to commit their traffic without being known or caught because they hide behind a curtain of anonymity. Therefore, cybercrimes have a great influence on the society whether it is virtual or real. Here are the effects:

There are many fields which are getting affected by piracy resulted from cybercrimes. There fields are like music, software and industries. It is really hard to count or estimate the damages generated from computer crimes as they could start from millions of dollars and reach billions of dollars in one year. That’s why copyright holders asked and demanded strongly for laws and regulations to be used against stealing intellectual property. That in fact led to the release of laws such as the Digital Millennium Copyright Act. Actually these laws help and offer aid to those holders in order to stalk criminals, find and charge them with large amounts of money to face the financial and emotional harm of these activities.

Being a victim of cybercrimes could have dangerous and horrible impact on your life. An example for stealing identity process is phishing or sending fraudulent emails claiming that they are coming from a bank or a certain organization in order to make you write your personal info and then they could steal them later. If you write down this info, this could give the criminal the chance to get into your bank account and steal your whole credit beside destroying your account and creating a new one without your knowledge. This damage could take many years in order to be repaired. Therefore, taking care of your personal info is a fundamental operation hat you need to apply.

Some Financial Losses to Individuals:

Losing large amounts of money because of computer crimes could be very large and massive. According to a report released by Symantec in 2012, almost one and half million persons became victims for cybercrimes starting from simple crimes like stealing passwords reaching to difficult ones like stealing money. By estimating a loss of about two hundred American Dollars for each person, this forms about more than one hundred and ten billion American Dollars each year. Because victims start to realize dangers of cybercrimes, criminals begin to create new technological and innovative crimes including the usage of mobile phones to maintain their illegal activities going.

Criminals of computer crimes focus their activities on business men and their work whether their business activities are small or big. In fact, they could try to hack machines in order to use them for their targets or control servers to steal data and personal info. That of course forces companies to employee efficient persons and skillful staff in order to keep those criminals out and protect its devices. According to a survey released by EWeek, large enterprises found that costs of cyber security were about eight million American dollars per year.

Dangers of Cybercrimes on the Middle East:

According to an International Economic Crime survey released by PricewaterhouseCoopers in 2014, cybercrime is considered as the second most spread form of economic crime in the Middle East although it is regarded as the fourth most spread form of economic crime on the international scale. Furthermore, this survey showed that the number of criminals is keeping its rapid increase.
On the other side, the innovation in technological devices and creativity in programs lead to more complicated and new crimes and threats. According to a study done by Cisco, the business in the Middle East is subject to great risks and dangers with a percentage of more than sixty five of workers getting prone to security threats because of using personal devices in the place of work. In fact, estimating the costs and expenditures of computer crimes is very hard because it is very hard to calculate losing business, harm to personal info and interruption to processes.
According to a report released from the Center for Strategic and International Studies, the international economy suffers from cybercrimes with costs estimated by more than four hundred billion American Dollars each year. It also stated that losses could be between three hundred and five hundred billion American Dollars. What’s more, a Global Economic Crime survey released in 2014 by the PWC stated that the amount of loss of cybercrimes in the Middle East is estimated between one million USD and one hundred million USD in a year. The report of PWC showed also that the countries which suffered the most from cybercrimes were Emirates, Oman and Lebanon. In fact, cybercrimes are very dangerous because the crime is committed before it is even discovered by long time. A thing which is very sarcastic is that the systems used by companies to save and protect them could be used by criminals to attack these companies.

To sum up, cybercrimes are very dangerous and could have harmful effects on people and organizations. They could destroy someone’s reputation or steal info from organizations’ computers and that could lead to many losses. Furthermore, cybercrimes could stalk people and steal their money from bank accounts. In addition, criminals of cybercrimes could participate in illegal activities like traffic in child pornography. Therefore, laws and rules should be released in order to prevent these crimes from happening and in order to protect people and their businesses. 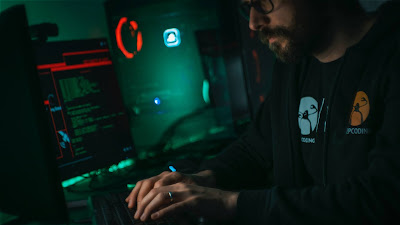