Environment is the place where all living and non-living of livings species are existed in. It is also the area where all the interactions of all living species are occurred there. Climate, weather, and natural resources are the aspects that affect human survival and economic activity. The natural environment is the concept that does not created by human interference but by the hands of God. The natural environment consists of natural components such as the complete ecological units that are function as natural system without the humans’ intervention. This units include within their boundaries all vegetation, microorganisms, soil, rocks, atmosphere, and natural phenomena. Another component that the natural environment is consisted of is the universal natural resources and physical phenomena. This is shown in air, water and climate, as well as energy, radiation, magnetism and electric charge.

Smog is the most obvious element in the air pollution that covers most of industrial countries nowadays. Yet, there are different kinds of pollution some are visible and other are invisible. They are also the main contribution of the global warming. Carbon dioxide, a greenhouse gas, is the main pollutant that is warming Earth. Though living things produce carbon dioxide when they breathe, carbon dioxide is extensively considered to be a pollutant when associated with cars, planes, power plants, and other human activities that include the burning of fossil fuels such as gasoline and natural gas. Other greenhouse gases include methane which produces from such sources as swamps and gas that produced by cattle and chlorofluorocarbons (CFCs), which are used in cooling system and aerosol propellants until they are excluded because of their worsening effect on Earth's ozone layer. Another source of air pollution is the sulfur dioxide, which is produced through burning coal to make a heat atmosphere in the houses.

Water pollution comes in the second stage of the environmental pollution. Water also covers over 70% of the Earth’s surface. Therefore it is a very important resource for the living and non-living things. Water pollution affects drinking water, rivers, lakes, and oceans all over the world. In the countries that have a great number of population and water is an important resource for them, it usually a leading cause of death, by people drinking from polluted water sources. It also occurs when pollutant substances are discharged directly or indirectly into water bodies without the required treatment to erase harmful compounds. These pollutant substances are produced by human causes or human factors.

Land pollution comes in the third position from the elements that make an environmental pollution. Since the existence of the industrial revolution, humans become the main source of destroying the environment by polluting it in many ways, that cause diseases in both humans and many other species of animals and plants. It also occurs when humans throw chemical substances into the soil in the form of pesticides, fertilizers, and insecticides during agricultural operations. As a result of the human actions towards land, many large areas of land lose its capacity to support life forms and ecosystems. If humans continue their abusing towards land there will be no doubt that the species of living and non-living things are going to be extinct.

What Is Environmental Management:

Environmental management is a concept used to improve human life quality. It includes the utilization of resources and the government to manage the use of both natural and economic goods and services. It is based on the ideologies of ecology. It uses conflict resolution and systems analysis to control the costs and benefits of development activities. This is determined through the affected populations and seeks to protect the activities of development from natural dangers. Moreover, one of the most significant tasks in environmental management planning and the resolution of conflicts is the conflict identification which is a fundamental part of what makes up "environmentally sound development."

All governments should encourage research projects to develop clean electric transportation methods in order to reduce dependence on fossil fuels. Nowadays, the American people use 384 billion gallons of oil per day for transportation alone (U.S. Energy Information Administration, 2010). It is considered that every gallon of gasoline produces 19 pounds of carbon dioxide (Engber, 2006), that results in the production of 7.3 trillion pounds of carbon dioxide every day. Thus, People should drive an electric car to avoid the bad effects of the gasoline in the air and repairing their cars if there is any deformity to avoid emissions.

2- Decreasing the Use of Fossil Fuel:

Moreover, the governments should enhance the creation of clean, renewable, and environmentally-friendly energy sources to avoid the continue using of fossil fuels. Today, the U.S. originates 85 percent of its energy from fossil fuels compared to the 7 percent assimilated from renewable sources (The National Academies, 2008).

3- Depending on Renewable Energy:

To avoid carbon emissions, U.S converts energy into sources such as solar, wind, and geothermal. These clean sources are not only will be reliable and renewable, but they will help in making the transition to electric transportation smoother. This is because; these technologies can be adapted depending on a region's available resources.

Replacing fluorescent and incandescent light bulbs to LED light fixtures. LED lights are known to be 50 percent more efficient than fluorescent lights and 90 percent more efficient than incandescent bulbs (Design Recycle Inc.). In the U.S., the lighting areas are currently 11 percent of residential energy consumption, which is 41 percent of the nation's total energy usage (The National Academies, 2008). Therefore, replacing every light bulb in American homes with an LED equivalent would cut the nation's energy consumption by approximately 4 percent. Then, considering that America uses 20 percent of the world's energy, putting in these light bulbs alone would reduce the global usage by .8 percent, which is considerable and this does not include the replacement of light bulbs in other industrialized countries.

In order to avoid the spreading of the environmental pollution individuals should stop smoking because cigarette butts are not biodegradable and contain toxic chemicals. Therefore, one butt thrown on the ground can remain for up to 25 years, infiltrate chemicals like arsenic, ammonia, acetone, benzene, cadmium, formaldehyde, lead, and toluene into the environment.

6- Not Throwing Bin in Water:

Furthermore, water protection is formed when the individuals stop throwing garbage and showering animals in the water because it helps in spreading water pollution. The countries should use recycling procedures to avoid the chemical materials from burring in the soil that helps in killing plants and transfers diseases to humans through eating harmful food. All these ways of protection will help in defeating the environmental pollution and to avoid its spreading through its fast and dangerous means.

One of the starting points towards confronting the issue is to identify shared goals between business and government, for instance sustainable manufacturing, resource productivity, and waste reduction. These goals can be achieved by reducing toxic chemicals in products and increasing recycling. Recycling is made through; running materials rather than waste to enable more effective production and reuse.

8- Decreasing Materials of the Production Process:

Moreover, reducing the concentration of energy, water, and material use in production and supply-chain operations and increasing mass of the green areas to control storm water runoff, connecting of ecosystem services to reduce community costs, improving flexibility in the design and management of substructure, and exclusion of harmful environmental and health impacts on underprivileged communities.

The United States Environmental Protection Agency (USEPA) is establishing flexibility in licenses as in the case of the Kendall Power Station in Boston, where releases of hot water into the Charles River were led to harming fish and entertaining activities. In February 2011, The United States Environmental Protection Agency’s USEPA’s New England Regional Office, created an innovative wastewater permit that used for converting the waste stream (thermal discharge) into a valuable product (steam) and pushing it across the river for sale in Boston.
In addition to the procedures that are taken in improving water quality, the governments also start to improve the air quality by replacing steam from older, coal-burning boilers. The local power station earns income from the sale of steam, and new jobs have been created to construct the conduits carrying the steam from Cambridge to Boston.

Furthermore, as a mean of confronting the environmental pollution is creating guide to community mapping, information access, and decision support, that helps in determining the risks; set priorities; and inform decisions affecting public health. This guide is the governments’ friend to examine the pollution in their countries including air, water and land pollution. This is to reduce the harm effects of the pollution on the living and non-living things and also to determine the places that might be the sources of such pollutions and start taking the punishment procedures toward it.

Pollution is the most hazardous aspect that attacks the Earth and threatens the existence of the living and non-living things on the Earth. Pollution is a general name that is said upon any change of the components of anything from its good effect to a bad effect. So that environmental pollution is the changes of the nuclear components of the environment through air, water, and land to be effected harmfully upon Earth’s natural resources. Natural resources are the resources that are created by God and without mankind interference. It also includes the most important resources which are: air, water, and land. These three resources regard as the controllers of the existence of mankind on Earth without these resources mankind will extinct. Moreover, this research paper, represents the definition of the environmental management which is the concept that is responsible for the guarantee of improving human life quality. For that the research paper displays some regulations and rules that are taken by countries to avoid environmental pollution and to manage it. Another thing that is shown in the research is the statistic uses in knowing the numbers of the countries which resolve and face the environmental pollution. 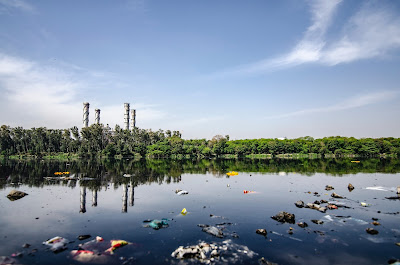