A Smoke detector is a device that alerts to a smoke in a place where it is put up to warn people inside a place to evacuate it or to discover the source of the smoke before it expands to the whole place. Smoke detectors play an important role in places that work in sensitive materials or hazards components because these components may be explode quickly or leak toxic smoke that can lead to death in no time if people inside the place do not recognize it on time. The smoke detector sometimes appears as a source of annoyance for some people because the device is so sensitive that starts to produce sound if a person smoke a cigarette at home. This leads some people to stop the alert, which exposes them to danger.

How Does a Smoke Detector Work:

Smoke detectors are always connected to both hazardous and safety. As they play a role of a rescuer. Therefore, some steps should be taken and known from fire safety procedures to insure the safety of the individuals and possessions. For instance, closing the door to the room that has fire that leads to decrease the spread of smoke; larger houses should have more than one smoke detector to cover the whole place; and to make a network between all the smoke detectors in the home to force them to alert with each other. Other fire safety procedures and instructions should be known to all people to guarantee safety and survival.

Many complaints during the history have been aroused for the increasing number of deaths from fire explosion or leaks of hazard materials in laboratories. These complaints encourage some scientists to invent new device to warn people about the hazard smoke before it reaches them badly. For that, in the late 1890s, the smoke detectors have been exposed to people, when George Andrew invented the first heat and smoke detector in 1902 in Birmingham in England.
The Swiss physicist Walter Jaeger decided to invent a sensor device for poison gas but he failed. After that, he worked again on it and in this time his work succeeded and was translated into the road map for the smoke detectors.
In 1939, a Swiss physicist Dr. Ernst Meil invented a device that contained an ionization chamber that was responsible for detecting the hazard gases in underground mines. This ionization smoke detector was extremely expensive when it was in the US markets in 1951.
The father of smoke detectors was called Duane Pearsall. He and Stanely Bennett who was his collaborator, made the first practical home smoke detector. This smoke detector was called SmokeGard 700 and it was made of fire resistance steel and took the shape of a beehive. Many developments in the shape and usage as well as components of the smoke detector devices were took place during the history. Therefore, in November 2013 it was estimated that the smoke detectors were fixed in 96 percentage of the United States' homes and for about eighty-five percentage of the United Kingdoms' houses.

Where to Use Smoke Detectors:

Smoke detector can be used in any place such as factories, companies, schools, universities, laboratories, hospitals, offices, homes, governmental buildings, and airports. This smoke detector usually related to a warning device in the fire station that reports for any hazard smoke in a place where the smoke detector refers. This connection to the fire station always made for hospitals, laboratories, factories, schools and universities due to the usage of dangerous materials in these places. Smoke detectors have a long history and many types for each kind of places to fit the capacity of it.

There are five types of smoke alarms, the first type is the Ionization smoke detector. Ionization smoke detector consists of a radioactive source and commonly Americium-241 that produces alpha particles. Moreover, the Ionization chamber is an air-filled space between two electrodes. This type of smoke detector is works when the particles of the alpha pass through the ionization chamber and allow small electric current between the electrodes. After that, the particles of the smoke that enter the chamber absorb the alpha particles which are responsible for interrupting the electric current which leads to activating an alarm.
Photoelectric smoke detectors are the second type, these spread a light sensor that includes a light source, lens to center light into a projected ray, and a sensor at an angle to the ray as a light sensor. In the condition, that there is no smoke in a place the detector made a light in a straight way to announce that a place is safe. Then if a place contains a smoke, the smoke detector starts to spread light in a place where this light enters the smoke particles and recognizes smoke and then triggering the alarm.
The third type is the projected beam optical smoke detector that is a device that works on the source of light obscuration. It consists of projected ray lenses and a transmitter, light receiver, and light reflector. The device is working when the light transmitter produces invisible rays that are received by a receiver in an ordinary condition. After that, the receiver adjusts to a preset sensitivity level based on a percentage of total obscuration, therefore, when the smoke reaches the rays the alarm is activated.
The fourth type is the aspirating smoke detector, which is the most sensitive device among others. It works by drawing a sample of air and other contaminates through a pipe network and directs it to a sensing chamber which is consists of a network of small-bore pipes, particulate filter, sensitive light receiver, centered light source, and a sensing chamber. It starts its work when the smoke approaches to the sensing chamber across the path of the light ray, light scatters and interacts with the smoke particles and then the output can trigger multiple alarms.
The last type of smoke detectors are video smoke detectors which are founded on the computer analysis of video images that offered by standard video cameras. This device consists of software for the analysis of the video images, a computer to connect to it, and one or more video cameras. The computer is connected to the specific software to analyze the video images of the pattern of smoke, when the computer recognizes the smoke it, triggers the alarm.

People should be aware of the importance of the smoke detectors to secure their souls and possessions. The governments of all countries should call for a smoke detector in all homes, factories, schools, laboratories, and companies and connects them to the fire station departments to call directly this department to secure the place of fire. Moreover, people should always check smoke detectors to recognize the damaged part and fix it. Further procedures for safety should be followed such as changing the batteries or get dust cleaned. Additionally, the governments should determine a safety courses for citizens to know how to react to fires or any danger when they happen. These courses can help in reducing the number of hazardous that may reach people during the fire time. 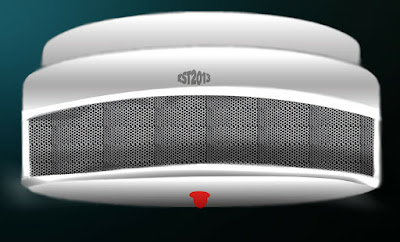