Paragraph on A Road Accident:

The topic of car accidents in Saudi Arabia is one of the most important topics that attracted the attention of many people and organizations. In recent years, the number of cars increased due to the increase in the number of expats and citizens who depend mainly on their private cars when they go to their work or move from one place to another. Car accidents are considered the most dangerous accidents among all types of accidents because of the high speed that most drivers and car owners tend to use while driving their cars.
This essay tackles the major causes of car accidents in Saudi Arabia (mainly Jeddah and Riyadh) and the strategy that the country implement in order to put an end of the spread of car accidents in addition to the recommendations that are directed to the people who live in Saudi Arabia to avoid car accidents. There are many causes of car accidents such as the traffic jam, high speed of cars, bad weather and the long period of driving in long road distances as well as the inexperience of some drivers. All these causes would lead the country to suffer from the severity of car accidents that cause many people to death or get critical injuries.

Traffic jam is the first and main cause of car accidents in any country. The industrial growth and remarkable state of development in Saudi Arabia made many people tend to buy private cars, which increases the number of cars and leads to traffic jam. Therefore, Jeddah and Riyadh streets are full of cars, which forces the Saudi government to establish many traffic lights and radars in order to control this problem and decrease the number of car accidents.
In 2007, the Kingdom of Saudi Arabia set a strict traffic law that compels all people in Saudi Arabia to respect the traffic lights or they will receive very expensive penalties that might prevent them from deriving anymore. According to the General Surgery Section at Hamad Hospital, the number of people who face car accidents because of the traffic jam ranges between 4000 to 6000 person per year, while about half of this number suffer from severe injuries and the other half meet their doom. It is great statistics as the number of deaths is very big considering the total number of population in Saudi Arabia. Therefore, it is important for all people who live in Saudi Arabia, whether they have cars or they have not, to adhere to the traffic laws and traffic lights in order to protect themselves and others from car accidents.

High speed is another reason of car accidents and one of the most crucial phenomenon that all countries around the world seek to get rid of it. According to Saudi Arabia General Directorate of Traffic, the number of car accidents is increasing day by day due to the reckless attitudes that many car drivers adopt when they drive their cars. Most car accidents occur because of the high speed of driving that many young men tend to do when they go to university or anywhere else. Young men always tend to copy what they watch in movies and programs of rushing and driving fast without expecting the dangerous that would happen as a result of high speed in on roads and off roads.
Moreover, some people ignore the importance of fastening their seat belts when they derive as well as people who are sitting beside the driver. This is a very risky deed that all people should be aware of because fastening the seat belt is very important to protect the driver and the one sitting beside him from any accident. Therefore, Saudi government has prescribed many fines on people who do not fasten their seat belts when they drive only to protect them from the scourges of car accidents.

The Problem of Bad Weather:

Bad weather and the longitude of period of driving in big roads are two connected causes of car accidents in Saudi Arabia. The raise of mist, heavy clouds and sunrise during the day in Saudi Arabia, especially in summer, prevents car drivers from watching the road carefully.
People who live in Saudi Arabia are suffering from the bad weather problem that disrupts their peaceful living in the country and increases the possibility of car accidents in on and off roads. Car drivers in Jeddah and Riyadh used to drive in high ways and long big roads in order to reach their destinations, which would make them drive for many hours in the traffic and loses their attention while driving.

The inexperience of some car drivers is also a remarkable reason for the increase of car accidents in Saudi Arabia. That is why the Saudi government make it difficult for people who want to issue Saudi driving license through forcing them to join a driving school to teach them the road guidelines and instructs.
Furthermore, the Saudi government with the help with the traffic department provide people in Saudi Arabia with very speed emergency aid in cases of accidents in order to save people`s life. Hence, it would be better if the respondents for driving license to recognize every driving lesson and focus with their trainers` advices to collect the necessary theoretical and practical information about the rules of driving in Saudi roads.

Finally, car accidents is a significant matter that concerns many societies around the world. The number of car accidents is escalating due to many reasons like traffic jam, high speed, bad weather and reckless of many car drivers. In the Kingdom of Saudi Arabia, the number of cars boomed due to the remarkable state of development, globalization and industry that the country witnesses in recent years. This thing backs to the country with negative impacts and this appears on the car accidents. There are many recommendations for car drivers in order to avoid car accidents, for example, they should respect the road traffic and laws and they have to fasten their seat belts as well as they should be attentive when they drive in on and off roads. 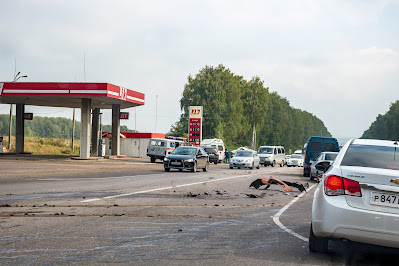