“The Tell-Tale Heart” story describes the process of killing and old person only because he has blue beautiful eyes and the guilt that results from it. It is a horrible tale in which the narrator tries to show that he is not mad, as he was able to kill someone cunningly and without a problem.
However, at the end of the tale, the narrator becomes ill and his mind is not in good condition. The Tell-Tale Heart is a tale that speaks about the mental state that a person passes through when he commits a crime.
Every human being has dark sides inside his inner self and the analysis of this side is not easy. Most people usually suffer from conversion of values and morals. These themes appear through the crime committed inside the story of “The Tell-Tale Heart” by Edgar Ellen Poe.
In fact, this story describes the importance of people`s life in a very sarcastic and ironic setting that involves death more than life. Therefore, the analysis of the criminal people`s life shows that it witnesses different conversions and instabilities such as; mortality and death, Insanity and illusions as well as evilness and hatred.

The Idea of Mortality and Death Analysis:

The Tell-Tale Heart discusses the idea of life, death and mortality in a rather unique setting with a criminal going after a life and a life being taken out by someone. In the Tell-Tale Heart the idea of mortality and importance of life can be seen ironically in the scenes with the old man`s death. The old man is shown terrified after realizing that someone was around him and his fear of death is obvious as his heart beats are heard by the culprit all the way till the culprit finally decides to kill him. The fact that the old man was killed on his own bed is an ironic and symbolic way to identify the idea of death. People when they die normally, they end up dyeing on their beds because of a heart attack, a malfunction of some systems inside the body or any of other natural causes.
On the other hand, when a person hears that someone got killed, they normally react thinking that the person died by a severe weapon or a gun. In the Tell-Tale what happens throughout the murder is the totally opposite to the normal life and death situations. The man was died but not normally and still his bed was used in the death process but instead of dyeing on it, the victim is died on the bed and the bed is in fact used as a murder weapon not a resting haven.

The Idea of Insanity and Illusions Analysis:

Insanity and illusions in criminals` life are also significant feelings as they often feel mad because they think of their guiltiness most of the time. According to Brinckle, 1887, P.192, insanity sometimes causes people to suffer from critical psychological pains which make them distracted and instable. Poe opens “The Tell-Tale Heart” story with the narrator`s speech that both emphasize his cunningness and madness. In real life, being insane describes the process of losing your mind. The narrator inside “The Tell-Tale Heart” story is obviously a little insane from the very beginning. However, it is clear that at the beginning he had some clear mind as he was able to plan the crime and initiate his crime. Any crime has a motive; nevertheless, in this story the motive behind the crime is in fact “An eye”.
The writer in this story added a motive that clearly shows the insanity of the narrator as it is a very unnatural motive to anyone in the world that of course that will sound insane. The stages of insanity shown within “The Tell-Tale Heart” story are several and they differ as the story progresses. At the beginning, the only thing that sounds insane within “The Tell-Tale Heart” story is just the motive of the culprit; however, the way the crime gets initiated in itself sounds insane as well as the way of hiding the corpse is also insane. By the end of “The Tell-Tale Heart” story, the last degree of insanity was obvious as the culprit passes through it and that is the illusion of hearing the victim’s heart all the way to the end even though he is already dead.

The Idea of Evilness and Hatred Analysis:

The evilness inside a person`s heart is a subject that has been debated since the beginning of humanity. In the Tell-Tale Heart the culprit evilness is in fact not that obvious in the beginning. The motive is not normal; however, it only allows seeing a slightly insane person or an abnormal person who hates someone for a silly reason. According to Poe, 1850, P.4, the criminal saw evilness in the victim`s eye but he ignored his own evilness when he committed such brutal crime. In fact, the evilness within the culprit who is also the narrator and the main character inside “The Tell-Tale Heart” story appears after he commits his crime. The method of death shows cruelty and that cruelty shows the hidden evilness inside the culprit and revealed the hatred inside the culprit. As humans do not see the evil side of people except through acts and that is clearly shown by the culprit `s act of killing someone else.
Another evil symbol that is worth wondering about is the motive behind the murder the “Evil Eye”. The evil eye as described by the narrator is an eye that can see everything and peers through the soul of a person. The narrator sees the evil eye as source of irritation however it is for a fact that the evil eye inside “The Tell-Tale Heart” story is not the one who is always monitoring the narrator’s life. Throughout most of the story, the narrator is the one monitoring and watching the life of the old man and not the opposite. It is a symbol of the evilness inside people; in this case, it is a symbol of the evilness inside the culprit himself. Following tucker`s idea, the reason that the culprit felt guilt in the end and went from calm to insane is the fact that he in fact killed the evilness inside him that promoted him to start the crime and so he confessed because he no longer has anything to hold him back. Thus it is a fact that in the end the narrator showed a lot of mad behavior and he imagined stuff that was not exist. A person might get an urge to do a bad thing once in a while; however, there is also a good side inside a person and without one another a person could go insane.

Finally, every human being has another side to himself; an evil side that is slightly insane or slightly confusing in one way or another. The discovery and the analysis of this side can help a person do bad deeds that cannot be accounted for in any way. Edgar Allan Poe shows the bad side of humanity using symbols and dark themes.
The Tell-Tale Heart describes the bad sides inside a person and leaves people to judge if indeed there is a dark space in a person`s mind in which a crime like the one mentioned inside “The Tell-Tale Heart” story is acceptable however it also puts the question of how to deal with the evilness inside people`s hearts and what solutions could be best as obviously Poe`s murder solution did not lead to a good end. 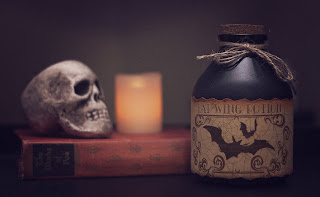