Mothers have great responsibility towards their children and their entire family. Most women wish to be a mother because it is a great feeling inside women`s heart. Women like to have children and give them their love, care and encouragement to be better people in the society. There are various types of mothers in the world, “Baby battle” by Susan Cheever discusses the differences between three types of women available all around the world, stay at home mothers, working mothers and unmarried ladies. Stay at home mothers most of the time take care of their kids and the house work. Working mothers usually leave their kids with a nanny while unmarried ladies most of the time feel irritated from childish behaviors and children in general.

From many years ago, women never worked and their only work was at home, cooking and cleaning but now the concept of working for women has become essential to many women. People have different opinions when it comes to the topic of working women and working mothers. There are many people support working mothers and help them to increase their participation in the workforce and become more effective in the development of the society. On the other hand, there are some people discourage working mothers and sometimes force them to stay at home to raise their children. Mothers should work in order to gain their identity, gain money and get new experience; in contrast, there are some people want mothers to stay at home to bring up their children and take care of family.

A Good Chance to Working Women to Gain Identity:

Mothers should work in order to gain their identity. Mothers become responsible and able to bring up their children when they work. There is no doubt that mothers always work respectful careers which is an effective support for why mothers go to work and not stay at home. The rate of marriage among females around the world has become high to a great extent, as huge numbers of women today marry after the age of thirty for the first time frequently, and until this age most of them have already succeeded in building a respectful career.
According to Nathan (1906), P.185, there are two types of working ladies those who work to spend and those who work because they need work. Women, who have developed a successful career before marriage and pregnancy and then completely stop it after that, are vulnerable to develop a feeling of guilt and depression for many cases.
Being a mother and a successful working woman is not a contrasting relation. It will take more effort and time in the beginning but finally a mother will gain its privileges. Moreover, most people have debated that being a successful working woman is such a motive for the woman to be a better mother for her children. As it will make the mother appreciate every second she spends with her children and her family. Eliminating the gender bias is also one of the most important factors that support the idea of working mothers.
There are many countries that still believe that women must stay at home by force. This misconception must be eliminated by all possible means and the first step towards this goal is to encourage women to go out for work and demand their right for a good job just like men. Women have suffered from discrimination based on gender or motherhood, as there are many stakeholders who refuse to hire an employee just because she is a woman or a mother in order to avoid the costs and vacations. And as long as women stays at home doing nothing, this wrong attitude will continue and the discrimination against women at work place will also continue with the same way.

A Working Women Could Gain Money for Living:

Mothers should work in order to gain money and depend on themselves. Financial independency is considered one of the major supporting reasons for the party calling for working mothers. According to Milne (1986), P.128, women sometimes work not because of a necessity but because they want to earn money to spend on the things they want to buy. Women before did not have the right to work thus they were totally dependent on men, and their only role at home was cleaning and cooking, but right now they earned the right to work for themselves and that gave them a leeway to spend money the way they want. Before men controlled the money factor in life, as a result women had little money to spend on themselves; however, since women can work right now they can easily earn money to spend it the way they want.
Earning money also means that a woman can help in the house budget along with her husband as ways of sharing the responsibility and that slightly lessens the burden on the husband and gives him some time to relax away from work. Women love sharing responsibilities and men should also share responsibility with women if they want to make their life successful. Moreover, the world today is completely different from the past and life conditions are even more difficult from before. It is not easy any more for a husband to financially support his family on his own as the world is frequently facing economic and employment crises which threaten the stability of many families around the world. So it has become essential for a mother to work in order to support her husband and her family.
Thus, this supporting factor for working mothers produces more supportive ideas included under it such as greatly numbers of mothers today are single mothers and holds the responsibility of financially supporting their children alone. Furthermore, the feeling of independency is very precious for the majority of women today and depends mainly on work. Finally, in many cases husband are not able to financially support their families alone due to the financial crisis in the world and the increasing prices of almost everything.

Working Women Could Gain Much Experience:

Mothers should work in order to get new experience. Mothers learn many new things when they participate in the workplace. They learn the appropriate methods for dealing with people, situations as well as different circumstances. The effectiveness of women’s performance and achievement at the workplace has proved to be more than men in several fields. According to Schneider (2012). P.1029, even in houses with females working the amount of housework that a female does is usually more than the housework that the males does. The nature of women’s mind is characterized by the ability of doing more than work at the same time surprisingly in an effective way.
In other words, women, unlike men, are more able to conduct multitasking jobs as women’s mind focuses on details and how to effectively accomplish the task in front of them, and being a mother is considered and even an advantage for working women. Being a mother enhances the ability to deal with urgent situations quickly and effectively. Being a mother also enhances the ability to work under pressure, to be patient and most importantly it qualifies the mother to be a responsible and committing woman. Thus, working mothers are working for themselves, their children and their society.

Work for a Woman Is Against Gender Bias:

Some people see that women should and must stay at home when they get married because after marriage woman’s only duty is in her home and kids, while some other people see that work is important for women and it is essential for them. Gender bias seems to exist till now and according to the secretary’s report of 2014 of the American Society of Naturalists. Gender bias exists everywhere even at work and what women succeeded in getting until now is not exactly equality with men or getting the same rights as men but instead they got the burden of working in addition to all their previous duties. Thus, women need to work in getting men to help out more at home because just like they have the right to work they have the right to rest.

Finally, work is really important for women and it helps them gain a lot of confidence in their life, work allows women to earn their own money and spend it to buy whatever they want, it allows them to feel independent. Women should be allowed to work whether married, engaged or with a child, they should be allowed to have a carrier outside their life. There is no doubt that the argument between the two sides which each of them whether supporting working mothers or supporting the call for mothers staying at home has a long history and still going on even until our present day. As there are other factors that enhances the two parties such as culture and economic perspectives. However, the answer to the question of whether should mothers go to work or stay at home has become obvious today to a great extent on the basis of the new world trends. 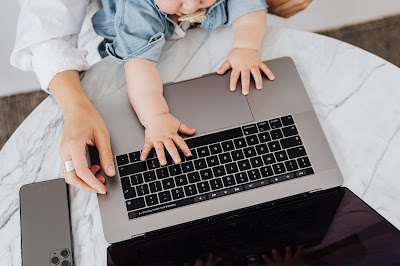