The usual question remains the same about either choosing a Mac vs PC. In order to decide this question and get the proper answer, you must determine first the advantages and disadvantages of each machine. Both are good but not in the same usage and purposes. For example, PC is good for computer games meanwhile Macs are way better in Graphic designing. In this paper, a detailed discussion about the two device will be carried out to measure the feasibility and give a sincere recommendation where it will be used by the administration of my company to upgrade the system and machines of our 20 graphic designers. They need a proof detailed analysis from the IT manager in the company. Based on his recommendation, the company will act towards the purchase process.
A background about the two systems in terms of hardware and software shall be illustrated. For all of us, it is know that the PC is a machine that is running by Windows as the operating system. Meanwhile, Macs uses Mac Operating systems and they come in different versions. Restating the all given information to the reader to it can be easily understood. And last but least the advantages and disadvantages per device will be explained. At the end, a conclusion with a recommendation from the IT manager’s side to the company to address their interests.

The paper is disusing the vulnerability of each system to decide the best solution in order to replace the old machines of the designers into a new and fresh computers so it can give more productivity and more tasks handled easier in less time with a better quality. Most of the companies face the same issue when it comes to graphic designing. Recommending the best of those two giants are hard to decide. Because of the continuous questioning which is better; a Mac vs PC? The answers remains vague because again it depends on what you are about to use and how will you tend to use them.
The way that handling of graphics are done, the processing of colors and type are all significant reasons when considering a comparison. Every graphic designer cares about the previously mentioned characteristics. Apple had come a long way in graphic designing. They are way better in many aspects. They more focused on improving the way handling the colors and fonts. This happens especially when it is going from a screen and file to printing and publishing. Choosing between Mac vs PC can be witnessed on different factors since Apple has the edge. These results are now applicable and can be easily found in the PC software and hardware, nevertheless. Web designing is a different story because either you are running a Mac vs PC, you have to go on testing both operating systems’ browsing experience.

Software of Mac vs. PC:

The Graphic designer is concerned with significant differences in terms of software which is available in the Mac vs PC. Before, Photoshop was a Mac graphics software which later turned by Adobe to run on windows. Despite the fact that both operating systems share the same software experience offered by the industry of graphics companies like Adobe, there are still a Mac only graphic applications that can’t be found for Microsoft Windows. The battle goes on. There is a fact that can’t be denied that PC software are superior in the field of computer gaming and 3-D rendering like for architecture.

Ease of Use of Mac vs PC:

Apple products are known for the smoothness, simplicity and zero freezing apps. Unlike Windows, sometimes applications crashes in the middle of project or while finishing a task. This can’t be found in Macs; only in rare cases. The ease of use is excellent in Macs. They are continuously introducing new features which comes by every release of their OS. They are truly focused on the user experience. The integration from application to one another give a clean workflow. While this is very apparent in their consumer based applications like iPhoto and iMovie, they in Apple continue to offer a professional processing tools and 3rd party products. On the other hand, Microsoft is much focused to give a better user experience in the windows itself as an operation system. In this point, Apple wins the battle far from Microsoft.

Cost of Mac vs PC:

The cost of Macs are way too high compared to Windows-running computer machines. However, the high standards of cash is justified by the heftier citing of high end support, higher quality hardware, and the benefits of the Apple ecosystem. The applications in Macs costs a lot if compared to Microsoft. Macs come with a few limitations of hardware unlike Windows where you have different manufactures who offer a variety of machines starting from $200 to $3000+. The higher you pay, the higher you expectations can be with Mac vs PC. With Apple, you are forced to comply to the device in hand. In Windows, it is different because you can choose between a variety of option and hardware accelerators. In the Graphic designing, GPU, RAM and CPU are the most important elements. First you need high capacity RAMs supported by high end Graphic Processing Unit (GPU). Few options are given though in Windows of the dedicated graphic accelerators. As a designer, you need a dedicated GPU experience. Shared memory GPUs are for dummies and beginners as well as gamers.

Which to Choose Mac or PC?

Overview about the pros and cons of Macs and PC in brief can be stated below. From the most accurate reviews of PC and Mac users, the following information can be mentioned. PC users considered that their Windows-running machines are better because PC has a variety of options, specs, prices, quality and it has different vendors which is not applicable with Apple’s Mac. PC is better in terms of the sources. Macs are closed sources. Most of the applications out there are basically made for windows. Macs remain expensive in the eyes of windows fans. However they themselves approved that apple’s Macs provide a better graphic experience.
On the other hand, Mac fans see that their machines are way better because it does not freeze, there is a good variety of software and apps. Macs do not have viruses. The machines are more stable and most of the working companies in the graphics (like Pixar and Walt Disney) use Macs. It is better in the 3d rendering as per the artists who use Macs in their daily work. Macs offer a better ecosystem than Windows. Apple was ever concerned about the graphic arts which are concerned with word processing with laser printers. Mac renders images and pictures better. The user experience of Mac compatible apps are way better.

For the above detailed comparison made between the two giants, I recommend that the company go for Macs. Yet these state of the art machines are expensive but they are worth it. From a technical background and designers’ experiences, Macs are their choice all the time. This does not mean Windows is bad. However, Macs remain strong, powerful and virus free. They use a superb technique in video acceleration and they work like charm in graphic/web designing. Windows has several drawbacks still in terms of compatibility and color accuracy.

Generally, Macs are considered better for graphic works when compared with PCs. And the ease of use comes as a very appealing factor for all the graphic designers. The drawback of Apple is only committed to the price tag. Unlike windows, Apple products are very expensive. However, they are top notch products and they don’t create bad gadgets. Apple always target the rich people who are able to afford their products because it is worth buying a Mac or an Apple product all in all. 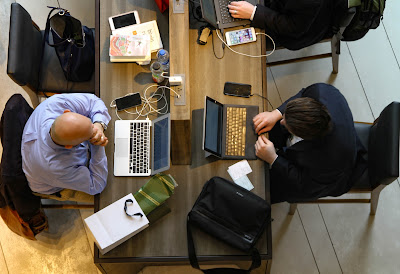