Setting of “The Jungle Book”:

The "The Jungle Book" story takes place in the jungle near a native village, where there are a lot of trees and animals of many kinds; the story is timeless where all the concentration is on the wild life of animals and Mowgli the human cub speak to each other, and where animals are speaking in vivid events full of suspense and adventure.

Characters of “The Jungle Book”:

1- Mowgli: A boy found in the jungle and was raised by wolves, he is the hero of "The Jungle Book" story.
2- The Father Wolf: A kind wolf who found Mowgli in the jungle and brought him safely to the cave and refused to give him to the tiger who wanted to kill him.
3- Akela: A great wolf who was the leader of the wolves who protected Mowgli and helped him a lot
4- Shere Khan: An evil tiger that wanted to kill Mowgli all the time.

Summary of “The Jungle Book” Story:

The wolves refused to give the boy to the tiger and kept him safe inside the cave. Years later the boy grew and the bear along with the panther taught Mowgli everything about the jungle; they taught him how to speak to animals and how to stay safe among them. One day the bear hit Mowgli lightly on his head, the young boy was angry, climbed the trees, and met with the monkeys, who were very pleased with Mowgli and wanted to keep him beside them all the time.

Monkeys Have No Laws:

Mowgli told the bear and the panther about his meeting with the monkeys and they warned him that monkeys have no laws like the laws of the jungle and that their ways are different. When Mowgli was sleeping, the monkeys grabbed his arms and legs and held him to the monkey-city, a lost city where humans used to live long ago. The bear and the panther asked their friend the python snake to help them return Mowgli back as monkeys fear the big snake. The snake helped them and Mowgli is back and safe.

Mowgli returned to the pack of wolves where Akela, the chief wolf is old and weak and could not hunt a deer. According to the law of the jungle, he is to be replaced by another chief wolf and Akela is supposed to be killed.

Many wolves are changed against Mowgli after Akela became old as he was the one protecting him. Mowgli wanted to defend Akela he went to the village and stole a fire-pot from a boy and returned to the jungle to find Shere Khan the tiger and other wolves, wanting to eat Mowgli. Mowgli threw the fire-pot, the fire came out and he lit a branch of tree, and held the flame and hit Shere Khan on his head and the tiger run away. Mowgli went to the village to live as a man, the villagers were surprised with his coming, and he was not comfortable with living in houses as he felt it was like a prison to him, so they sent him to care for their cows and he was happy.

The grey wolf met Mowgli and told him that Shere Khan the tiger is seeking to revenge from Mowgli and wants to kill him. Mowgli with the help of Akela set a trap for the tiger, they waited until he ate and drunk and became heavy, then the grey wolf and Akela helped Mowgli to make the buffalos run fast over Shere Khan who died under the feet of the running buffalos. Mowgli skinned the dead tiger and was feared by the villagers as a boy who speaks with animals and killed a tiger. They dismissed Mowgli and he returned to live in the jungle among the wolves.

Review of “The Jungle Book”:

Truly, "The Jungle Book" is an exciting story that is full of suspense and action all the time. The events are set to keep the reader excited along the story. The idea of animals teaching a human is not very far from reality as humans learnt many things from animals. "The Jungle Book" story gives a specific quality and role to every animal. The story has a dreamlike effect as the fantasy in this story is quite convincing. 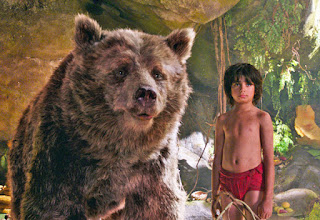