Setting of “The Mummy Returns”:

Characters of “The Mummy Returns”:

1- Rick O'Connell: The protagonist of  "The Mummy Returns" story who’s an American explorer. Rick O’Connell is fond of travelling and living new adventures in many places around the world. Rick is a brave man and a loving husband and father. Rick is married to Evelyn O’Connell. Both Rick and Evelyn have a brave son called Alex. It appears from  "The Mummy Returns" story that Rick loves his family very much and always trying to protect them. He is also a smart and funny man.
2- Imhotep: He the Mummy character, who cm back to life in order to spread evil and control the world. But in ancient Egypt, Imhotep was the High priest of the Pharaoh Seti I. However, he was punished of with the Curse of Hom Dai because he killed the Pharaoh after he discovered his relationship with the mistress of the Pharaoh, Anck-su-namun. This Curse punished Imhotep by burying him alive forever. After about three thousand years, Imhotep was accidently released during digging operations above his grave. After his revival, Imhotep did everything possible to resurrect Anck-su-namun, and he wanted to scarify Evelyn in order to do so. As obvious Imhotep represents the evil in this story which Rick with his family and friends succeeded in defeating at the end.
3- Evelyn O'Connell: She was also called Evie by her Husband Rick. Evie is and intelliegent and beautiful woman, she is an archeologist, in the Cairo Museum of Antiquities. She met her husband Rick in an Egyptian prison in 1923 and since then she has played an important role in solving a lot of mysteries about the ancient Egyptian civilization during her adventures with Rick and her brother. She speaks English, Arabic and ancient Egyptian language. In the Mummy Returns, Evie is now married to Rick and have a child, Alex. An important discovery also was released in this story which is that Evelyn is the reincarnation of Princess Nefertiri.

Short Summary of “The Mummy Returns”:

Rick O’Connell Evelyn is now married and has a seven year old son Alex. The three of them is back to Egypt, it is 1933 now. They are looking for the Bracelet of Anubis. Anubis is the God of the dead and his bracelet gives great power to anyone who wears it. But the Scorpion King has the bracelet and thanks to the great powers of this bracelet he did not die 6,000 years ago. The Scorpion King is an evil character and he is going to wake up again in the Year of the Scorpion, as he wants to control the world unless someone killed him first.
Two other evil characters are looking for the bracelet; Meela who was Anck-su-namun in the past and Lock-Nah. Meela as always wants to wakes up Imhotep in order to rule the world. And in in order to achieve this goal they received help from three dangerous men who are there when Evelyn finds The Scorpion King’s box, with the bracelet in it. They take the box back to England, but the three men follow them.
Then, the three men kidnapped Evelyn without noticing that the bracelet is still on Alex’s arm. This fight led to dangerous chases through the streets of London, with Evelyn’s brother Jonathan driving and Evelyn is nearly killed inside the British Museum. Now Imhotep is awake and with the help of Meela and Lock-Noh, they kidnapped Alex and forced him to lead them to the resting place of the Scorpion King. Rick’s friends, Ardeth Bay and Izzy, help him to find Evelyn and then find Alex. Alex gets the bracelet off.
On the other side, Meela meets Evelyn and they fight as Anck-su-namun and Nefertiri again. Rick and Imhotep are also fighting. In the end, Imhotep and the Scorpion King both die. Anck-su-namun also died when thousands of scorpions ate her. The O’Connell family left in Izzy’s balloon and returned home.

Themes of “The Mummy Returns”:

The major themes of the series of the Mummy in general and the Mummy Returns in particular are the history and archaeology of Ancient Egypt, the long battle between good and evil, desire and struggle for power, and finally the family love and unity.

Impression & Criticism of “The Mummy Returns”:

"The Mummy Returns" story is one of the most interesting parts of the Mummy series of stories. It’s a very interesting and exciting story as it attracts the attention of it reader from the first page. The sequence of the events is very organized. In fact, I really enjoyed every minute I spent in reading this story. Truly,  "The Mummy Returns" story was full of secrets and historical mysteries which gives it some sort of uniqueness. 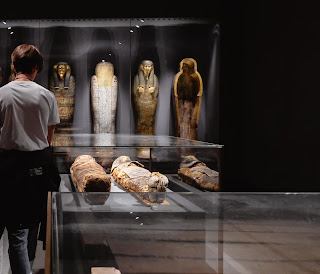