Advantages and Disadvantages of Video Games

Teenagers nowadays spend a lot of time playing video games in their homes, they feel attracted to games and they usually use most of their spare time playing violent games like PUBG, GTA V or Call of Duty. However, Children should not spend too much time playing games for various reasons. First, sitting in front of a screen playing all the time is unhealthy for children. Second, a child main duty should be his studies and so gamming all the time is not a beneficial thing for children. Finally, children should focus on becoming more social with their peers and playing games will never help socialize with others.

Although video games in fact affect the behaviors of the players negatively sometimes, they also affect players positively. When Children or teenagers play video games, games stimulate their brain and give them real training. In many video games, in order to win you need a high level of intelligence, speed and tactical thinking which are Skills that are hard to acquire in real life while studying and are never taught at schools. The list of skills improved by video games includes;
1- Enhancing The Skill of Following Instructions:
When a child plays a game they learn to follow the game`s instructions and those instructions show them that following certain rules in life can in fact help them in real life. As a result, they apply the same idea of following laws and instructions in real life in order to win.
2- Problem Solving Skills Development:
Playing a game like Angry Birds or Cut the rope, children train their brains on how to solve problems and come up with creative solutions in order to solve the problem that the main character is facing. They innovate ways to solve puzzles in a short amount of time and train their brains to think outside the box.
3- Hand-Eye Coordination, Fine Motor and Spatial Skills:
In certain types of games like shooting games, the characters may be running and shooting at the same time and this usually requires a lot of training in the real world and a lot of training in the virtual world too. Players need to train themselves to keep track of the position of their character and their enemies, where they are heading and the position of their gun when they are aiming at the enemy. Players in games like that need to keep in mind a lot of factors and coordinate the brain`s interpretation of all these factors and react with the movement in their hands and fingertips.
4- Planning, Resource Management and Logistics:
When playing survival games for example, players need to manage limited resources and decide how to use them the best ways, the same way they`d have to use them if they ever experienced the same situation in real life. This skill appears in strategy games such as SimCity and Railroad tycoon. Gam makers of SimCity say that the game has inspired a lot of its players to challenge themselves and seek a carrier in urban planning and architecture.
5- Increasing Multitasking Skills:
This advantage includes simultaneous tracking of many shifting variables and managing multiple objectives. For example, strategy games incorporate in their system the element of surprise in order to make the players adapt and use new techniques quickly and change their plans from one plan to another. This ways of surprising the play makes a person flexible even in real life and allows a person to learn how to control a situation better.

1- Increasing Violence:
Another thing that should be taken into consideration about gaming and gamers is that some studies has shown that playing violent video games all the time is connected to aggressive and bad behaviors and it`s very risky on children and teenagers. Video games in the current generation keep escalating in its violence and the amount of dangerous tool used inside them. Tools like guns, tanks, knifes and even bombs are currently easily accessible to kids and teenagers in video games and having all that inside a game is seen by some people as a stimulant for teenagers to do the same thing they see in video games in real life.
2- Anger and Bad Behavior:
Is it true that violent games cause negative attitudes and bad behaviors? Some people believe that child gamers tend to imitate the games they play and that helps them get violent and leave a mark inside their mind. On the other hand, some people believe that it`s the parent`s fault that children get violent because of gamming as they don`t watch their children the right way and so they don`t see what games their child is playing. Also, Some parents buy the games themselves to their kids ignoring the violent content inside them, once a teenager sees that his parents are ready to buy any violent game to them, they take advantage of that and buy even more violent games without their parents noticing the fact that some of the games are not fit for their age.
3- Problematic Behaviors:
All that leads them to exhibit violent and problematic behaviors, thus some children exhibit violent behaviors that are easy to notice while others exhibit behaviors that parents tend to ignore as just an irritated action or something. However, the truth is any problematic behavior in children should be worrisome for the parents. Children who are exposed to violent games may slap or poke other children, they may get into quarrels at school and say words that they shouldn’t mean, all because they are imitating the violent games they were allowed to play.

In conclusion, addiction to video games is in fact an addiction that appears due to a person’s desire to control. Parents should control the bad effects that stem from playing video games and that is done through surveying and watching their children constantly and only allowing them to play the games that fit their age. Parents should also teach their children the negative effects that constantly playing video games will have on them and let them know that playing a lot could worsen their vision and tire their bodies and that might help them improve their behavior and take care of how much time they spend playing video games. They will also learn to take advantages of the good skills that are usually gained from playing video games and leave the bad skills away from their life. Thus, they will be able to balance their real life with their virtual life. 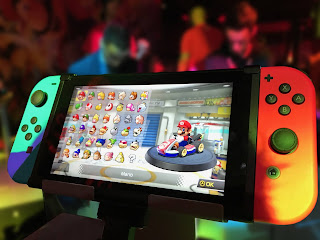