Qatar is one of the countries that has a high rate of road accidents in spite of not being a big country. Such accidents result in the death of the injury of many people. A study "In-depth Analysis of Vehicles Accidents in Qatar" illustrates accidents in Qatar. This study shows that many accidents that happens in Qatar happen in the nighttime (Walker, 2015, Paragraph 7). The study tells that most of the accidents happen in the hours between 6 and 9 PM. In addition to that, roads' congestion in Qatar gets heavy at the beginning days of the week. By the weekend, roads get emptier.

1- Fogs that make both drivers and passers not see well.
2- Not wearing safety belts.
3- Eating or drinking while driving and this distracts the driver.
4- Driving very fast and passing the speed limits.
5- Using cell phones while driving and this makes drivers unaware of road signals or lights.
6- Traffic lights as accidents almost happen in Qatar in the night.
7- People in the Gulf region like to go on a hike, camp or go to the beach in the night because of the high temperature of the sun and this makes accidents in the night more than the day.
8- Driving fast and this happens between males especially the youth that usually drift with their vehicles.

The deaths rate in the Qatari roads are between males more than females. Accidents between males is 90 percent. Hence, males in Qatar are reckless in driving their cars more than women. The highest rates of accidents is between men that are aged between 20 and 30 years old. All these results show that there are many accidents in Qatar and the reasons of such accidents are numerous. In fact, fogs, not wearing safety belts, eating or drinking while driving, driving very fast and using cell phones while driving are all causes of on-road and off-road accidents and this required Ministry of Interior in Qatar to take urgent measures in order to face this big problem.

Fog plays a role on the on-road and off-road accidents in the state of Qatar. In 19th of January this year, fog in Qatar was heavy and this has led to hundreds of accidents in this day. The exact number of accidents in this day was exactly one hundred and thirteen according to a report from the Ministry of Interior. Fortunately, there were no deaths or injuries in this day. As a preventive measure, many patrols have wandered the streets of Qatar in order to organize traffic. The Qatari traffic authority also has moved to the places of accidents in Alshamal and Al-Khor in order of moving the afflicted cars. The ministry of interior has advised drivers to leave a space between the forward cars, to be very attentive and not to drive fast. All these are good measures to avoid any road accidents. Moreover, drivers were advised to park their cars in the proper places (Peninsula Newspaper, 2016, Paragraph 1-5).

3- Not Wearing Safety Belts as a Problem:-

Road traffic crashes are the cause of the death and injures of many people in Qatar and one reason of these crashes is not wearing safety belts. According to Burgut et al. (2010), 26.6 % of the Qatari persons who have a driving license have been a subject of accidents and they had a previous history of road traffic crashes. This rate is the quarter of the Qatari drivers and this is a big rate according to drivers in other countries.
The rate of the males that are involved in road traffic crashes is 69.4%. Most of this rate are people in the age between 25 and 34. A rate of 23.5% of the Qatari people that are crashed on accidents in Qatar because of not wearing seat belts. There is another serious cause of roads accidents in Qatar, which is eating or drinking while driving and the rate of such people that caused accidents is 37.9%.
Besides, many people make road accidents in Qatar because of using their cell phones during driving and the rate of such people is 41.9%. The highest rate of causes of road accidents is because of violations in traffic and the rate of these people is 57.2% (Burgut et al., 2010, Page 497).

In 2013, many people have died because of accidents in Qatar. The number of people who have died in such accidents was the highest in thirteen months before. To solve the problems of on-road and off-road accidents in the State of Qatar, the Qatari government and the traffic authorities started to implement two implement two major procedures. The first procedure is raising the public awareness of the drivers in Qatar about the traffic rules through the signs and media campaigns. This has made people attentive and knowledgeable of the safety procedures that would save their lives. This major copes with the international orientation of enhancing people's knowledge of traffic rules and laws.
The second procedure that the Qatari government started to implement in order to reduce the traffic accidents is applying the law enforcement. To do this, the Qatari traffic authority has increased the number if the patrols in the streets in order to apply the traffic laws. In addition, the traffic authority has increased the number of the roads' radars in order to punish the acceleration violators (Kovessy, 2015, Paragraph 1-6).

To sum up, there are many reasons for on-road and off-road accidents that happens in Qatar. The rate of the people that die in Qatar because of accidents every year is 12.5% and this is a very high rate (Shams, 2014, paragraph 4). Thus all efforts in Qatar should be unified in order reduce the number of on-road and off-road traffic accidents in Qatar to save people's lives especially with the approaching to FIFA World Cup that would be held in Qatar in 2022. 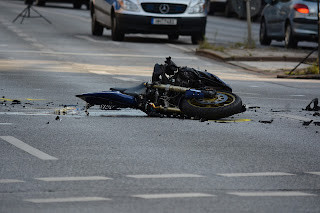