Compare and Contrast Essay on Sports

Sports in general is considered a physical efforts of an athlete through practices and trainings according to specific regulations. The main purpose of sports is gaining entertainment, competition, enjoyment, strengthen the abilities and improving the skills. This research would compare and contrast hockey, basketball and futsal in order to raise awareness of differences between these sports.

There are many exciting sports that people like to perform and watch for instance Hockey: is very fascinating sport as two teams are challenging each other in order to score goals by a ball or a plate using a hockey stick. There are two categories of Hockey, field hockey, ice hockey. Field hockey is played on a grass pitch with a little solid ball, while ice hockey is played on the ice hall with a plate. On the other hand Basketball is considered a team sport that is played by two teams competing to make the ball cross the basket of the opponents. Relating to volleyball, it is considered a popular sport that is played by two teams and there is a high net separates them. Each team has to hit the ball above the net to the opponent`s zone to get points. Finally, futsal is similar to soccer as it is played with legs but players practice it inside sports halls.

Starting with Hockey, the pitch length is about 91 m, its width is 55 m and there is a middle line to divide it into two areas in addition to there is a goal with a net for each team. The sport is played by a stick takes L shape, weighted about 730 g and its length is about 90 cm. There are two types of hockey, field hockey is played by 11 players on a grass or sand pitch as well as ice hockey is played on ice hall as the players use skis on their feet to make them move fast, the number of the players is 6 players wearing shields to avoid injuries if they fall on the floor. The rules of the sport are: the sport lasts for three rounds, 20 minutes for each round and two breaks, 10 minutes for each break. Both teams are aiming to score the ball in the net of the competitor in order to win the match.
Then comes basketball, it is the most popular sport in the united states and receives a huge reputation around the world. Basketball is played by two teams, each team consists of 5 players seeking to make the ball cross the basket of the other team by using their hands to throw or pass the ball. The basket is 3 m height so that the sport depends mainly on tall players with high fitness. The rules of the sport: the sport lasts for two halves and each half is divided into two periods of 10 minutes, the whole time of the match is 40 minutes and there is a break for 15 minutes between the halves. There is also a time out can be taken by the manager of each team in order to resettle the plan of the sport or refresh the players. Many rules can be applied in basketball such as 3 seconds rule that a player can`t stay the ball with him more than 3 seconds under the basket of the opponent, the 5 seconds rule as a player has to pass or throw the ball within 5 seconds and the 24 seconds rule as the team has to hit the basket of the opponent within 24 seconds.
Referring to volleyball, Volleyball is considered an amazing sport, it is played by two teams each team consists of 6 players and 6 substitutes. The team gets a point if the ball falls inside the opponent`s zone or if the opponent hits the ball outside the specified lines. Thus, the team wins the match if the players manage to win 3 groups, each group ends if the team collects 25 points. There is no specified time for the match as it depends on points and groups. Each team plays with different plans as the team who have the ball, its members try to hit or pass it to make an attack; on the other side the rivals members try to defend the raids through making a block of raised hands in order to prevent the ball from falling in their area, these strategies divert according to who have the ball.
Unlike futsal, the team members are 5 players including a goal keeper. The sport is played by legs as the players do their best to score the goal inside the net of the other team by talents of dodging and elusion. The time of the match is 40 minutes divided into two halves and about 15 minutes as a break. 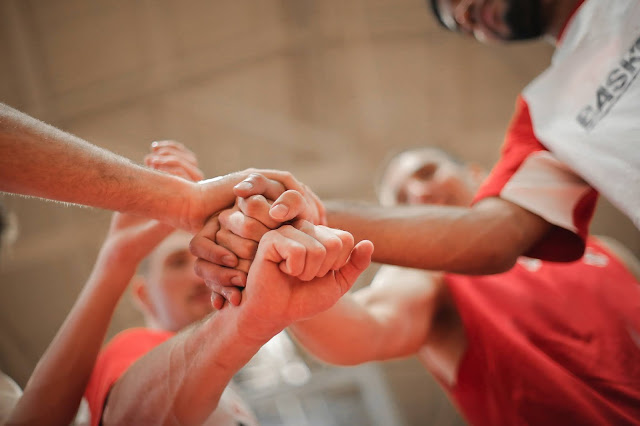