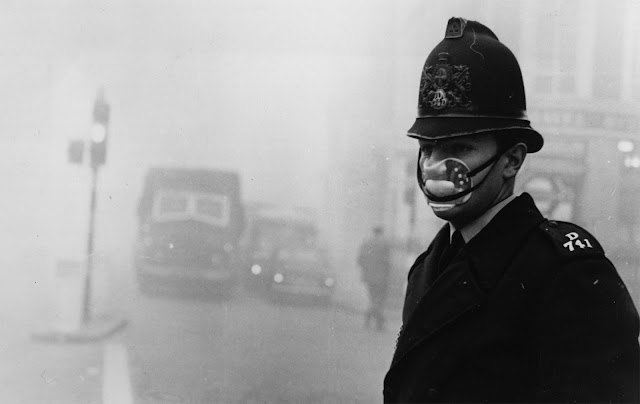 Allah is the creator of mankind and provides the mankind with an intellectual superiority over all other creatures. Allah also gives the human beings the responsibility of building the earth and taking care of it as well as using its resources in order to help them in the mission of construction. As a result of that the mankind uses the surrounding natural resources in a bad way that in turn affects his life. So , some environment regulations and rules are putted to reserve the environmental resources and the life of the mankind. Reviews and evaluation the condition of the environment is the most important thing to collect information about environment and starts making environmental studies to solve the problems or enhance the resources of the environment. This article shows an environmental pollution case study that is the Great Smog in London 1952 because of burning much coal in homes due to the cold winter in this year.

Paragraph about Solution of Pollution:

It is hard to solve the problems of the air, water and soil pollutions, as it will take years to be fixed. Industry and motor vehicle are the first sources of making pollution to the environment. Heavy metals, nitrates and plastic are toxins that are responsible for pollution. Water pollution is caused by oil spill, acid rain, urban runoff. While air pollution is produced by various gases and toxins formed by industries, factories, and burning of fossil fuels. Finally, soil pollution is caused by industrial waste that prevents soil from its essential nutrients.

The Great smog in London is one of the best known sulfur- related pollution episodes. It also took place in London from December 5 to December 9, in 1952. This is happened when there is high concentrations of air pollution were stuck to the ground because of particular weather conditions at the time.
The Londoners were burning a lot of low-quality, high-sulfur coal to heat their homes due to the hard cold winter. As a result of that, the experts examine the situation and conclude that it may be as a result of the mixture of sulfur oxides with particulates and other air pollutants that produced such heavy pollution. Moreover, they claimed that this air pollution is one of the most dangerous kinds that always lead to current death.
As a result of such a disaster, about 4000 individuals were dead which occurred during this period and another 8000 in the months that followed. They were died due to the inhalation of the polluted air which lead to respiratory tract infections from hypoxia that means the low levels of oxygen in the blood and due to the obstruction of air passages by pus arising from lung infections.
According to such a disaster, the government of London putted some regulations and rules to face such a problem and started to raise the awareness of the individuals about the importance of preserving the environment to avoid more disaster as it regards the mean of the human beings existence on earth. Furthermore, the government started to invent and produce new heating resources to face the problem of the hard cold winter in London.

Recommendations for such a problem are many and various but the most important of it is how to make people recognize the mass of the hazard that is coming from the environmental pollution and how to avoid the sources that can produce this danger. This may be through raising the awareness of the people towards this danger and involve them in the process of protecting the environment from pollution. Moreover, encourage the new generations from youth to invent new techniques to stop the pollution from spreading or even from existence.
Edit This Article
Tags Health and Safety