A Paragraph about Artificial Intelligence

Artificial intelligence is an area of computer science that is appeared as intelligent machines that work and act like humans. It also designed for major purposes, which include speed recognition, learning, planning, and problem solving. It is a sort that human being can access information, actions, ideas, and other aspects from the human nature in order to help humans in their daily life. The most difficult stage in preparing the artificial intelligence is in programing it from computer for certain traits such as; knowledge, reasoning, problem solving, perception, learning, planning, and ability to move objects.

The idea of creating a machine that acts and moves like humans has been mentioned for a long time. However, the ancient Greeks, Chinese and Egyptian engineers created automatons. Its beginning started when a classical philosopher needs to describe human thinking as a symbolic system. However, it is actually founded in 1956 at a conference at Dartmouth College, where the term "artificial intelligence" was mentioned. After the conference, scientists and engineers started their mission of creating an artificial intelligence, yet this mission was not so simple and many experiments were failed. For that the government stopped funding this project from 1974-80. In 1997, IBM's Deep Blue became the first computer to beat a chess champion when it defeated Russian grandmaster Garry Kasparov. Thus, this was the first invention in the field of Artificial Intelligence (Tanya Lewis).

Cognitive science is the science that includes many disciplines of computer science, psychology, philosophy, artificial intelligence and robotics. This science is aiming at understanding how intelligent systems work which is a system that some information is store inside for a specific purpose. Therefore, the concept of perception regards as the main aspect for the intelligent systems. This is because when the scientists as well as engineers begin to access the information inside the robotic or the computer, in that time, their main aim is to make the machine recognize and accept the information inside it in order to interact with humans.

According to my personal thoughts and feelings towards artificial intelligence, it is an amazing invention that at its first appearance it surprised people by making a machine or a device talking to them like humans. It is considered a very significant invention that helps people in their new era where technology accelerates the life of the people and makes them always in need of help and support.
However, this invention has disadvantage in spending expensive costs to create it and to pervasive it in the markets. Moreover, as a machine that programed on some sorts of information sometimes it is hard for it to understand our slang language. Therefore, human should be careful when they talk to it. Despite its disadvantages, several different advantages are shown in the artificial intelligence field. Artificial intelligence service as killer of time in the boring jobs. It uses as a teacher for the children through the talking learning programs on the computer and the smart boards in schools and universities. It also can interfere in many fields that aim at helping people in their life. Therefore, it is beneficial to expand the usage of artificial intelligence through the whole world fields.

Artificial intelligence is important in our new era, as people should learn how to understand and use it. This field is also surrounding us due to the technological invasion that controls our lives. However, it has a lot of benefits that can be offered for people and make them cannot live without it. As artificial intelligence controls all the aspects of our lives, it appears in all the equipment that we are using in our daily life. For that, it may appears as a computer that can provides the user with information or as a navigator in a car that helps you to reach the required destination or may be as robot that helps you in house work.
Therefore, people as well as governments should defeat the illiteracy of artificial intelligence in people to guarantee the development of a country. Moreover, artificial intelligence is significant in the areas of mental and physical health as it activate the mind of the person through testing programs or even games programs and physically through interfering in the medical equipment that facilitate the way the doctors can treat the patients.

This article has a significant impact on me as it provides valuable information about the artificial intelligence, which occupies large areas in our lives. Furthermore, it encourages people to learn more about it and to defeat the illiteracy of technology in order to cope with the new inventions. However, the question that occupies large thinking of people is; what we will be from the artificial intelligence in the future after all these technological innovations? 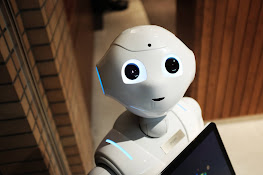