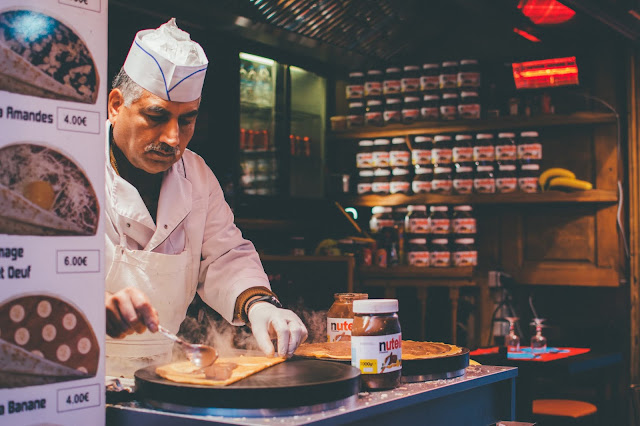 Based on the huge fan base of Nutella in the world, the focus of the advertising campaign should be focused on both adults and children. As mentioned before in our marketing idea of Nutella with its tagline “No Nutella, No Breakfast”, the focus will be given in accordance to this meaning. It’s also quite interesting to know that adults, including parents are huge fans of Nutella product as well. This is a major asset in our advertising campaign. Hence to overview the whole idea, quickly drawing the headlines for the advertising campaign. The social media strategy of Nutella could be summarized as follow:
1- Nutella loves itself as a brand and this makes the company vary its products like waffles, cookies, pancakes, ice cream, cakes and croissants.
2- It is proud of its position and this is shown in the strategy of exposing the product that has rich flavor.
3- Nutella seeks for having and making fun of the brand name through advertisement.
4- Nutella celebrate all holidays especially on Twitter and this makes customers feel with interest.
5- Nutella leads the market through being the best hazelnut spread and this is shown in ads strategy on social media.

Strategy #1: Depending on Big Chain Supermarkets

First, I’d love to start with big chain supermarkets in Doha like Carrefour. Basically, you can find Carrefour in every corner in Doha. There are other chains like Almeera which is also worth a try. In regard to supermarket chains, children always go shopping with their families. They will find our small booths in different corners in the hypermarkets with the ability to take a cup of Nutella to taste it or even with a piece of toast with Nutella spread on it. Of course our team members will provide highest level of hygiene and good-looking to keep the brand’s image clean and clear to everyone who would love to consider buying the Nutella.

Another way of achieving the targeted media plan is to be more active on social media. As far as it’s known for everyone by now, the power of social media is completely stunning and effective. Using our accredited digital marketing companies we usually deal with, we shall provide them with the main idea we would love to see in the ad-clicks you find in different corners in your web screen. Click to visit our Nutella webpage for more info and kids games. Children love puzzle games. So why not provide them with fun and puzzle games that tend to promote the brand of Nutella. It would be a great and useful idea. It costs less and it makes more traffic to our webpage. Hence, it would be considered a profitable and cheap advertising idea.
Using the strong fan base on Facebook fan page of Nutella can also make a new change by engaging the customers into the posts we should implement on daily basis. I would consider making and providing a competition between fans when they answer right about some basic and simple questions on the history of Nutella. The answers can be found on our website and the internet. The questions would be in the form of “when Nutella was first made?” and the first 10 top scorer by the end of competition should get vouchers to buy Nutella free and discounted for instance. Using the second powerful ad-centered twitter would mean a lot. Creating a hashtag of our marketing slogan “no_nutella_no_breakfast” while asking our fans to share their pictures taken with Nutella to express their love of the brand as well as their stories with the chocolate brand. In addition, it would be nice to ask them what they do like the most of Nutella?

Strategy #3: Depending on Advertising Vehicles

Using ad vehicles and poster them the Nutella brand. Another way is the use of Karwa Taxis and attached the sticker posters to advertise our beloved chocolate Nutella. I would suggest that renting, by an agreement with advertising company, a truck to go all around the city in some known stops to be published on social media before getting the truck to visit the place. The truck would distribute free food with Nutella to passersby. I would love to see this truck more in crowded places of expats because they are the majority in the Gulf. The truck should also go to create awareness in remote areas outside away from the Gulf capitals. All these methods are quiet enough to create a poll of awareness with the public.

As mentioned above, the campaign will be effective in different stages. The first stage is to consider the opportunity that the Gulf is full of hypermarkets and supermarket chains. This is a great asset. To deliver the highest rates of brand reachability, considering chains like Carrefour in all big malls like city center and landmark, implementing brand-test booths could make a difference. The second method is the focus on social media. Facebook can drive sales high if well-used. Hence, I’d ask the management to provide us with a famous in-the-field digital advertiser to help creating the hype about the brand. Using the hashtag “no_nutella_no_breakfast” and promoting it to generate more hits and traffic would also work like charm in marketing and advertising. Using twitter, YouTube and vine as well as Instagram would also be a good idea. Actually it is must to invade the social media because everyone now has a smartphone and access to the internet.
There is a channel that I think it will make the hype about Nutella. Basically it is a Facebook page. It’s quite famous and everyone hit a like easily because they provide easy, homemade and quick recipes using few tweaks and ingredients. They love to use Nutella. I’d say that we can communicate with them and contract them to use Nutella more in their videos. Their ideas usually lasts to 30 to 1 min maximum and their ideas are stunning. Hence, it is worth trying. Advertising through the radio is not the best idea at all neither newspaper. Our targeted customers love to see the power of Nutella and how it’s being spread on the loaf and toast. Hence, TV is the best choice after social media. Using TV ads is usually a major asset for us because it boosts sales very quickly. Nutella will appear 10 times during rush times of the TV so assure noticeability. The use of ad vehicles would also boosts sales and awareness of the brand more. The use of trucks that will visit towns and the capital while going all around the corners with festive ideas and delicious food is another solution.

So basically, as mentioned, the targeted audience will be children in the first place and their parents as well as adults and social media fans. Hence we are targeting a wide range of potential customers. The main objectives of this campaign is to drive sales higher in the Gulf and increasing the awareness of the brand by creating an engagement opportunities with loyal and potential customers. The loyal customer I need to keep him loyal and the potential customer I want to win him into my territory and not to look somewhere else. Targeting mothers is also another way of boosting sales and awareness because they should know how important the chocolate for their kids in the early stages of building their bodies.

The client is Nutella and we are trying to achieve some objectives to the brand to sell more in the Gulf. The main thing to worry about is that Nutella was accused before to cause obesity or to be more precise, it is considered one of many elements that makes kids obese since it is chocolate and it’s yummy all the time.
Hence, the campaign will be targeting mothers, youth and especially females who are going to be a mother one day. They should change this idea of obesity of Nutella buy giving them some facts about the importance of chocolate to build their kids bodies and it is the bad eating habits to blame. That’s why the slogan matches our claim. No Nutella, no breakfast is the right choice because it simply mean that Nutella is more often eaten in the early mornings before school and during classes. It boosts energy of the kids. And there is no worry about obesity if they eat it in the morning. This is the campaign Big Idea that includes minor messages to be delivered through the different channels.
Of course correcting the false messages to people will increase awareness and hence will increase the sales for the brand. Nutella is the love of kids and adults. It should remain positive every time they are looking to eat. It should be their first spread chocolate choice.
My recommendation to this campaign is to start with social media first before spending with TV commercial to receive fans feedbacks. It’s important to listen to what people say and want. TV commercials are expensive so we should be careful with it. The big and main idea is that Nutella is a friendly and tasty spread chocolate product causes no obesity. Also that kids love it in their breakfast. The second mean of advertising could be the small hypermarkets booths. As per the granted budget, I would definitely suggest the medium budget campaign. 70% of the budget will be addressing the TV commercials. 25% would be targeting the social media ads because it’s paid ones. I would ask to precisely choose the top traffic websites access in the Gulf as well. The rest of budget will definitely be for the trucks, booths and ad vehicles. The budget will be around ten million Riyal.
As per airing timing, as mentioned above, it would be in the rush hours on TV and in between programs. Social media needs no timing. It is all the time 24/7. Trucks will be implemented within the back to school season.
Being different from our competitors will be described based on the fans feedback and needs as well say the survey that they will be gently asked to fill online through different channels online. Our fans are our asset of success and differentiation comes from the customers admiration and love to the Nutella Brand. They will notice the difference in every aspect of quality of the packaging, products, taste and eventually our scope; advertising.
Edit This Article
Tags Business Topics