As a matter of fact, working in teams must be organized and coordinated. Besides, the team that works inside this group must have certain targets and objectives which it aspires to achieve and accomplish. These targets and purposes have to form the word SMART.
First: Specific: in fact, goals determined by the team must be specific and very clear. For instance, the team must increase the income during this year and till its end by 10 percent.
Second: Measurable: the team must put and specify measurable goals. In other words, it has to determine a certain time for achieving these targets. If the purposes weren’t measurable, managers wouldn’t be able to assess the performance of employees and workers inside the team. Although targets are used as benchmarks, teams could continue to determine and specify objectives that aren’t measured.
Third: attainable: the targets determined by the team must be realistic and have the ability to be accomplished. They can’t be fictional although they must be challenging and competitive to push the team to achieve these targets.
Fourth: Result-Directed: the leaders of the team ought to determine the final result they desire to accomplish and do.
Fifth: Time-Determined: the targets set by the team must have a starting and an ending period of time.
That’s how the team could be able to achieve these targets without facing any problems or having to deal with other issues during the process of accomplishing them.

In fact, working in teams and group turned out to be a mutual target for social organizations and human institutions since the beginning of humanity when ancient people used to hunt, bring up families and children, eat and defend themselves in groups. In addition, the historic events of the human is based on the story of a group of people working together in order to be able to discover, accomplish and occupy other lands so that they could provide themselves and their families with food and a place to stay. However, the recent point of view about working in huge institutions and corporations which were progressed at the end of the nineteenth and the beginning of twentieth is considered as a story of work as a gathering for individual careers and professions. Nevertheless, a different collection of international powers which were revealed and explored over the recent two decades has forced corporations and organizations in the entire world to reorganize and re-coordinate work inside teams to allow a lot of speed, flexibility as well as good responses to the unpredicted situations and problems. This change and transformation inside the field of work has turned group effectiveness into a prominent interest in the organizations worldwide.
On the other hand, teams affect our lives daily and their effectiveness is considered as fundamental to humanity through a large variety of social processes and operations. As a matter of fact, there are a lot of studies and researches which have been done through thousands of years that concentrated on perceiving and affecting the operations which lie beyond group effectiveness. That’s why in this research we will talk broadly about group effectiveness and how it affects people in their lives as well as its disadvantages and whether it is fruitful and beneficial or not.

Actually, there are a lot of characteristics for working in groups in addition to their effectiveness.
First: all the members of the team understand perfectly and are aware of its processes. The members must take time to discuss and talk about these processes which include the ability of the team to accomplish its targets as well as having a determined and one approved approach such as regulations, laws, ethics, predictions, rules and experience. In fact, this will prevent its testing about the ability of the workers inside the team and what could be interfered with its processes. No matter what the problem is, the members besides leaders ought to discuss every issue and find solutions for them.
Second: the members must have one target and they all approve it. They have to discuss freely and with open mind the targets till they could understand that these objectives mean a lot to each one of them.
Third: the environment in the workplace must be comfortable and free of pressure and stress. In fact, the atmosphere of work has to be realized so that employees and members of the group could be able to do their jobs perfectly without facing any problems.
Fourth: the group must have clear targets as well as obvious objectives of performance. In addition, these targets could be transformed by the members into basics and rules. Furthermore, the members have to determine and achieve a full collection of small victories through the way to huge goals and targets.
Fifth: all the members inside the group are free to talk freely about everything they want to as well as having the ability to discuss all the problems and issues they face. Besides, they could express their feelings and emotions in addition to explaining their ideas and thoughts.
Sixth: a field and an environment of discussion must be made so that everyone inside the team could take part. However, it has to be associated with the targets and objectives of the group. If this discussion begins to talk about other subjects, then the leader must bring it back in short period of time. In addition, all the members have to listen to each other and respect their thoughts and opinions. Besides, members can’t get scared to be shown as foolish or stupid when they discuss a whole new and extreme idea.
Seventh: the majority of decisions have to be taken based on the approval of most of the group members. If one member doesn’t want to agree about a certain decision, then leaders can’t force him to accept it. All the causes and thoughts have to be tested and discussed and the group searches to solve them instead of arguing or quarrelling between each other. If one of these opinions or problems can’t be solved or reached, the members have to adapt with their existence without allowing them to influence their work or stopping their efforts.
Eighth: every member is responsible for his own work and opinions. In addition, every person has to respect all the mechanics and operations in the group such as respecting times of arrival and departure, attending meetings and conferences as well as finishing tasks required from them on time. When actions are applied, determined tasks are made in addition to being approved and finished by each individual.
Ninth: criticism is considered as a good thing as each member could be criticized in order to improve and develop its work and performance inside the workplace.

In the majority of offices inside companies, individual work is replaced with group or teamwork. As a matter of fact, working in groups could be competitive when there are a lot of characters and individuals inside the team. However, it could offer and grant a lot of advantages to the company as well as the employees and workers. The whole staff could be demanded to practice and train in groups to be able to make these advantages emerge and appear. From the pros of teamwork are the following:

Members with various backgrounds and cultures grant innovative and creative experiences as well as thoughts and ideas to other members inside the group. This diversity in knowledge, skills, thoughts, opinions, concepts and methods could be considered as benefits for both employees and organizations through increasing the income and productivity of teams in addition to strengthening their response and adaptation to new situations and conditions.

Another benefit for working inside a group is that it allows each member to grow and increase his skills and talents. When each member receives and discusses new ideas, thoughts and concepts, it will give him the chance to increase his mentality and get an obvious view of the whole environment and atmosphere of the work. Hanging out with diverse cultured persons could decrease the mental obstacles of fearing foreigners encouraging workers to be more open minded as well as accepting new personalities and characters from different societies and communities.

The members of the team have to discuss and talk about their ventures and operations. This discussion results in generating and producing a lot of ideas and thoughts. It also could lead to encouraging the members to be more creative as well as thinking outside the box to bring new innovative ideas. Moreover, discussion could be considered very beneficial for resolving problems and finding solutions for them too. When a person works individually, he is limited to his own ideas and thoughts without being able to discuss other new ideas related to his colleagues and co-workers. By discussion, employees and members could be able to find new methods and techniques that could be more effective to finish and complete their work.

each employee has a certain experience as well as specific skills and talents when he comes to work in a company. Some of these experiences are mutual between two or more persons while others are limited to one employee. This atmosphere full of various ideas and expertise gives the chance to handle difficult situations and hard projects with ease and calmness. If a person works individually, he could suffer because of his limited experience. On the contrary, if he works in a group, he could take advantages of the experiences of his colleagues.

Although working in teams and groups has a lot of benefits, it could have a lot of disadvantages and negativities. Here are some of these disadvantages:

Con: A Disadvantages for Relationships:

Though working in groups could offer a lot of challenges and a competitive environment, it could offer disadvantages in the field of relationships. The following elements are some of the dangers and risks that you could face while working in groups: First: misunderstanding other members’ thoughts, ideas, messages or opinions. Second: producing conflicts and arguments with other members that could harm their emotions and decrease bonds and ties of your relationship with them. Third: taking a lot of time to keep, establish or fix these relationships with other members inside the group. Fourth: some members could defraud, manipulate or cheat the confidence of other members.

Con: A Disadvantages in Tasks:

A lot of groups can’t achieve success and victory in arriving and accomplishing their targets. Some workers could definitely become angry or upset or even depressed because they think that their groups are going backward instead of moving forward or achieving any progress. Some of the following elements differentiate the negativity of teamwork from what it workers could be able to achieve by themselves or with sole colleagues. First: if members couldn’t be able to keep in touch and contact with each other, they could forget what they have talked about as a whole group. Second: when members work in team, one of them could feel that he is not responsible about the task he does and he could certainly neglect it or not doing it perfectly. Third: diversity in thoughts and ideas could be considered as an obstacle to the group in order to achieve its goals as it could cause distraction and confusion.

To sum up, working in teams is very beneficial for the companies as well as the members of the group. It offers a creative environment and helps workers to increase their talents as well as improving their skills and experiences. Therefore, I think that teamwork is much better than individual work. 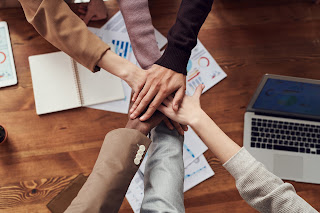