The elephant man is a story book written by Tim Vicary. Later, it was performed as a play in 1977 written by Bernard Pomerance. After a large number of previews and performances, the play was closed in the Broadway Theatre. Moreover, it was acted in other famous theatres including Royal National Theatre and Hampstead Theatre in London. On the other side, the story talks about Joseph Merrick who used to live in Britain at the Victorian Era but he was hated from the public because of his distortions and deformed body. As a matter of fact, when the play was performed, the actor who was in the role of Merrick did not put any artificial organs. He was just deformed from the physical side allowing the audience the chance to imagine the rest of Merrick’s features.

Characters of "The Elephant Man":

1- John Merrick: The protagonist of the story and he was a deformed creature.
2- Fredrick Treves: The doctor who studied the case of John and brought him to the hospital.
3- Mrs. Kendal: A lovely lady who helped Treves and Merrick in order to be able to enter the theatre.
4- Carr Gomm: The administrator of the hospital in which Treves worked.

Short Summary of "The Elephant Man":

The story begins with a doctor who works in the London Hospital named Frederick Treves. He was walking in the streets when he noticed a picture on the wall of a shop saying “come in and see The Elephant Man. Two pence.” When he stared at the picture, he saw an ugly creature and he described it as a “creature” because it was neither a man nor a woman. It had a big head like an elephant and his right shoulder was deformed unlike his left arm which was very beautiful like a lady’s hand. Therefore, his curiosity led him to meet the owner of the shop who was called Simon Silcock in order to make him meet the elephant man.

After his meeting with John, Treves asked Silcock to take Merrick in order to study his case at the Hospital. But there was one problem: Merrick had a difficulty in waking because of his big feet, police always arrest him and his owner because they don’t like them and people are afraid of him. That is why Silcock told Treves to get a cab in order to be able to get John. Later, when they were in the hospital, Treves gave Merrick a card with his name on it and he thought that John wouldn’t be able to read it. Instead, he took it and put it carefully in his pocket. Treves took Merrick back to the shop, but when he returned back, he did not find the picture on it.

Treves did not see Merrick again for 2 years, but later the police brought John to him at the Hospital when they found his card in John’s pocket. Because the hospital did not have enough beds for people, Treves told Mr. Carr Gomm about Merrick’s case. Therefore, Gomm who was the manager of the Hospital wrote a letter to The Times Journal in order to get help. They received money from the readers of the Times of about 50,000$ and that is how Merrick was able to have a home in the hospital for the rest of his life.

In the hospital, a beautiful lady came to visit John. As he told Treves, she was the only woman who smiled at him after his mother. Later, the Queen of England, Her Majesty Alexandra, came to visit him, sent him later a lot of cards and granted him a gift which was a picture of her with her name on it. He was very happy. On the other side, he watched a play at the theatre with Treves and he admired a beautiful actress there. He kept thinking about her and was happy because she married a good man at the end of it.

When John asked Treves about what these two lovely people are doing now, he told him that they may live in the country. So, he wanted to the visit it. He stayed there for six weeks and then came back to London. At the end of the story, Treves found John dead in his bed because he wanted to sleep on his back but he could not. Gomm sent also a letter to the Times in order to tell them the death of John.

Analysis of "The Elephant Man":

I think that the story is really great and gained a lot of fame because it was turned to a play and then later to a movie. Many readers liked it because it was so sensational and it shows how a hated man lives inside an ugly society which treats him like an animal. Because they were classy, they did not like him. But when he became famous after the letter sent by Gomm to The Times, they began to love him. In my point of view, I think that the author wants the readers to know that money can change anyone and people can do anything in order to get money even changing their attitudes and their thoughts. 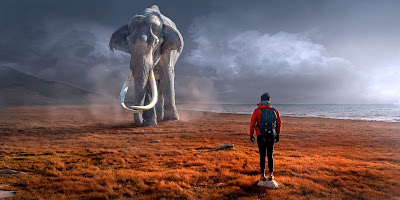