Author of "Three Men in a Boat":

Jerome Klapka Jerome the author of "three men in a boat" is known to be an English writer as well as humorist. Also, he is famous for his humorous and his comic story that is called "Three Men in a Boat". It is related to his other works of literature. This story isn’t a comic one but a Most of his novels were written in London. He died at the age of 68 on 1927.

Setting of "Three Men in a Boat":

Three Men in a Boat occurs at the end of the 19th century. Most of events are happened on the River Thames where they started their journey and they pass by many towns and landmarks within several of the locks that control the river upstream of Teddington. Moreover, they continue their journey until they reached Oxford.

Characters of "Three Men in a Boat":

He is the narrator of the story. He is a young, single and middle-class man who lives in London.

He is a friend of J who works in bank and insists on organizing the needs of the trip.

He is the friend of J. He likes food and drink. He is a short-tempered.

He is the one who convert the smallest task into a main endeavor that is required the assistance of everyone in the house.

They accompany several characters on a boat. They dressed in boating clothes that seem to be designed for appearance.

Summary of "Three Men in a Boat":

A Boat Trip Through the Thames River :

Three Men in a Boat is a fictional story that is about of three London friends and a dog that makes a boat trip through the River Thames. They started their journey from Kingston- to Oxford. The story is told and narrated by ‘J.’, whose other two friends are George and Harris and the dog. Later in the evening, they assumed to be sick from overwork and so the prescribed a holiday of fortnight to themselves. So, they made a boating trip that they would travel on the Thames and camp out in the hired boat at night.

George Returns to the City:

Later, in the next Saturday, George has to return to the city in order to join them on that day while J and Harris and their dog has a cab to Waterloo station, however they can’t find a train to Kingston. So, they ask the driver to take them to another place there instead.

Moreover, J keeps descripting events they face during their journey that they have other mishaps such as the time when they tinned pineapple for tea but unfortunately they can't find the tin-opener. So, they spend long time in order to open it but they can’t success.
In additions, there is the time when they were in the in which has a stuffed trout in a case and many people claim that they have been the one who caught it, however when George stops on a chair to look at it, he knocks it then it breaks , it became a plaster of Paris.

At the end of the story, they reached Oxford and then they began to travel back, it begins to rain so they can’t enjoy their travel. Hence, they lift the boat and took the train to return to London, where they intend to go to a show and have dinner in a restaurant where they are good away from the boat.

"Three Men in a Boat" Analysis:

I liked this book because it is full of many comics and humor situations .Three Men in a Boat is one of those books which have become legend. In addition to, it is described as one of the comic books in the English language. I like the way the writer describes the scene of comic such as the situation of opening the cane. On the other hand, the book is interesting because it is a 'travel book' that is full of jokes more than seeing the sights. The narrator shares with readers the little asides and humorous stories, about anything. So this story is enjoyable. 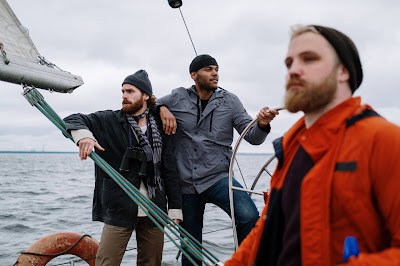